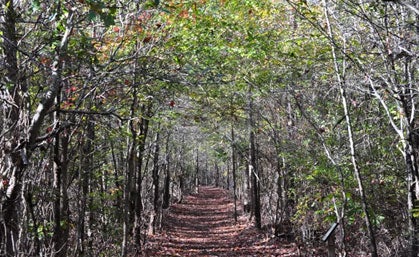 It’s not always easy for a middle-to-back-of-the-packer to get jazzed about prize packages at races, no matter how lucrative. “Who cares?” you might think. “I never finish near the top.”

What if the odds of winning were evened out a bit? This year’s inaugural Medoc Spring Races in Hollister, North Carolina, April 20, 2013, are modeled after the infamous Dipsea Race in northern California, the second oldest U.S. footrace after the Boston Marathon. Known for its handicapping system where runners’ start times are staggered according to age and gender, Dipsea equalizes the playing field, making the final outcome uncertain—and all the more exciting.

Says Michael Forrester, owner of the Tar River Running Company and Medoc Spring Races Director, “I was reading about the Dipsea race that described the battle between the two top competitors, their race up the stairs, and what they were thinking as they both went for the win. Then I got to the part where it said that the competitors were an eight-year-old girl and a 68-year-old grandmother. I thought, ‘This is awesome; we need something like this.’”

Known for their quirky 10-mile and marathon-distance Medoc Trail Races, organizers of the new 7.4-mile Medoc Spring Races will bring the unique flavor of Dipsea to the East Coast.

“The Dipsea Race is legendary,” says Forrester. “If we can just create a fraction of the magic that their race holds, we will consider it a great success.”

Medoc Mountain State Park is situated in the heart of the North Carolina Piedmont, about an hour outside of both Raleigh and Greenville, and offers excellent trails. While there are rocks and roots, Forrester says runners won’t have to deal with any stream crossings or vault over fallen trees. He considers the course challenging but not highly technical. One of the biggest challenges will be developing a strategy for passing—more common in a handicapped race format than that of a traditional race, where runners naturally separate by pace in the first mile or two.

What appeal does the race hold for elite runners, who will start at the back of the pack? Says Forrester, “This gives the elites a chance to say, all things being equal, I can still win. If you can start from the back and pass 300 people on your way to the finish, that’s really saying something.” Several regional elite trail runners have already been recruited to push the pace from the back.

On the other hand, the race gives an opportunity for middle-of-the-pack runners to see what’s going on at the front of the race. Everyone shares an equal chance at being a top-50 finisher able to choose from among an exciting assortment of prizes—including gift certificates, race entries, watches, DVDs, apparel and more—that are, in total, worth over $2000.

In a world that sometimes frowns on kids participating in competitive races alongside adults, Forrester says they are working hard to register more kids. “The course is a little tough for kids,” he admits. “You have to find a special kid who is talented and who can run those trails.” However, to encourage all ages to come out and be a part of the fun, Forrester offers discounted registration to runners under 18 and over 60. Currently, the oldest registered runner is a 67-year-old man, and the youngest is a 10-year-old boy.

For every week leading up to the race, the organizers will unveil new surprises that will make the Medoc Spring Races extra special. Similar to Dipsea’s famous numbered black t-shirts for finishers, all top-50 finishers will be awarded tech hats with their finishing place number. The race organizers also plan to ignite a Battle of the Sexes, awarding bragging rights to whichever sex earns the most top-50 finishes.

For more information and to register, go to http://www.medocspringraces.com/.

Steph Jeffries loves to eat cookies and run trails in North Carolina. With her husband and coach, Andrew Jeffries, she owns and manages Runnerpeeps, a personalized group-running program. She’s also a forest ecologist who teaches at North Carolina State University and writes about her joys and mishaps on the trail at stephjeffries.wordpress.com.