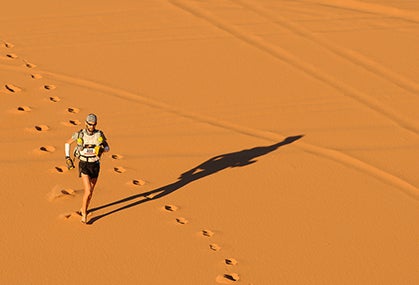 This year’s Grand to Grand Ultra (G2G), a self-supported, seven-day, 165-mile stage race near the Arizona-Utah border, was swept by two runners, Michele “Mickey” Graglia and Chantal van der Geest, who had never before faced the challenge of running high mileage day after day with a loaded pack.

Unlike supported stage races, participants in the G2G must carry all their own food, sleeping bag and other mandatory gear for the week. The race organizers provide communal tents and water at camp (including hot water, so runners do not have to carry a stove), as well as water, electrolyte pills and sunscreen at checkpoints along the course. Most runners’ packs weigh between 20 to 25 pounds at the start.

The course features 18,000 feet of climb, winding across hot desert plateaus, through red-rock canyons, over slickrock, and through dense, prickly piñon and juniper forests. It starts at the North Rim of the Grand Canyon and finishes on the Grand Staircase formation near Bryce Canyon National Park in Southern Utah. Off-trail sections of the course require running up dry, rocky river beds and scrambling, often on all fours, over steep dunes of loose sand.

Due to a severe hailstorm and flash floods, the final stage was cut short by five miles this year. 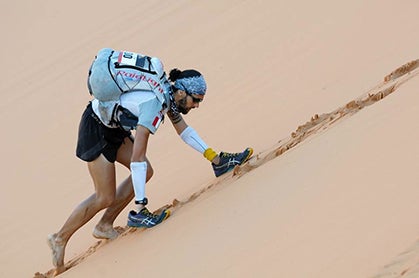 Graglia climbing the dunes around Mile 40 in the 53-mile long stage. He carried his shoes and ran barefoot because he did not have gaiters for his shoes, so they kept filling with sand. Photo courtesy of Grand to Grand Ultra.

The Two Winners and the Two Surprising DNFs

Michele “Mickey” Graglia, 31, of Italy (now living in Los Angeles), won the Grand to Grand Ultra in 31 hours, 25 minutes—more than five hours ahead of runner-up Ken Letterle, 32, of Texas. Graglia began running ultras in 2011, only recently switching from road ultras to trails. This was his first stage race.

Early in the week, Mo Foustok of Saudi Arabia posed the biggest competitive challenge to Graglia. Foustok had won the 2013 Racing the Planet Iceland 250K self-supported race and was runner-up in the 2012 Gobi March (part of Racing the Planet’s 4Desert Series of self-supported stage races). But Graglia came from behind on Stage 1 to finish 10 minutes ahead of Foustok, and then on Stage 2, Foustok went off course and subsequently decided to drop.

On the women’s side, three-time Marathon des Sables winner Laurence Klein, 45, of France, ran near the front of the pack for the first two stages and held the women’s lead. But on the long Stage 3, during the route’s first major 1,000-foot climb up a vermillion cliff, Klein briefly went off course and suffered problems, which she later explained had more to do with her emotions than her physical state. After taking a break at a checkpoint, she decided to drop for the remainder of the week.

Klein’s DNF opened the way for Chantal van der Geest, 37, of the Netherlands, to steadily work her way up. Van der Geest—an attorney who recently became a judge, and who started running ultras in 2010—also has run  TransAlpine Run, a supported stage race in Europe. 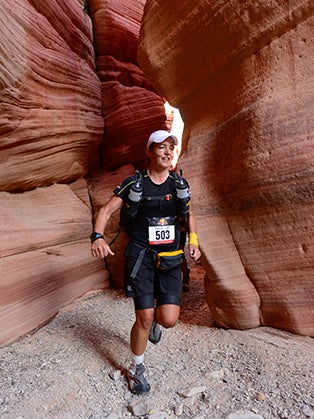 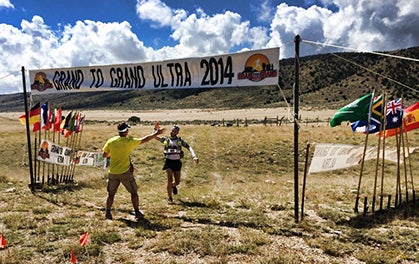 Graglia pictured here as the first finisher at the end of Stage 1, greeted by the RD Colin Geddes. Photo courtesy of Grand to Grand Ultra.

1. You both have previously raced the 100-mile distance. How does a self-supported stage race differ from a 100-mile ultra?

Van der Geest: A self-supported race is more challenging than a 100-mile ultra because it’s not just about running a long distance, but also about bringing the right gear and the right amount of food/calories. Besides that, a self-supported race is more fun because you meet a lot of nice people with interesting running CV’s, and you make a weeklong beautiful journey with them. It feels like I’ve made friends for life during this stage race.

Graglia: The G2G is renowned as one of the toughest races on the planet, but I didn’t quite believe it until I ran it. 100-milers are extremely demanding and can get very deep on a mental level, but you get to enjoy fully stocked aid stations along with the cheers and support of your crew, and best of all, you get to sleep in your own bed when done! During the G2G, we had to carry all our equipment, plus calories and food to last us seven days straight. As you can imagine, heading into 25 to 50 miles each day sleep-deprived and on a low-calorie diet, carrying a 15 to 20 pound pack on your back, was the toughest thing to face. The day in and day out hard effort over seven days of racing was not a joke! By far the best thing I brought home from this adventure was the camaraderie and friendships I made at camp.

2. What was one moment on the course that profoundly challenged you, and how did you get through it?

Van der Geest: On the third stage, which was 53 miles long, I struggled because it was quite hot that day, and at checkpoint 4, which was halfway, I miscalculated the amount of sports drink I needed. As a result, half the water I was carrying was too sweet and undrinkable. After a while I ran through my water and got very thirsty. When I did get to the next checkpoint, I drank too much water too fast. As a result I got stomach-sick and couldn’t eat anymore. After a while I started to feel weak. Luckily, I met another runner (Mike McTeer, aka “Terminator Mike”), and we ran/walked together. His presence helped me through the last miles.

Graglia: The toughest moment on the course was definitely on Stage 3, the 53-mile leg. It was not only the longest but also the hardest in terms of elevation and technicality of several different types of terrain. I hit a rough patch right on the Coral Pink Sand Dunes. At times, while cresting these gigantic sandy staircases, I had to drop on my knees to catch my breath and shake off the tingly sensation of busted quads. Perhaps the beauty of the landscape and the warm golden color of the sun setting over the desert dunes helped me stay focused and make it to the last checkpoint before dark.

3. Which of the six stages was your favorite and why?

Van der Geest: I liked Stage 5 (26 miles) the best, because it was the last long stage of the race, so all the runners were excited and there was a good energy. The stage went through Peek-a-Boo Canyon (a slot canyon featuring curved, sculpted pink sandstone walls, pictured above) and a dry riverbed. It was a very beautiful trail. I enjoyed almost every minute of it.

Graglia: My favorite was Stage 3, the long stage. It was by far the most challenging but also the most beautiful. It was an always-changing scenario, from fast gravel roads to quad-busting mesas and dunes, from sandy desert roads to stunning red-rock formations. The endless variety of terrain and landscapes was jaw-dropping.

4. In hindsight, what would have done differently in terms of food and gear?

Van der Geest: I brought lots of sweet food, containing lots of calories, but I wish I had brought more salty snacks. After a while I didn’t like eating all the sweet stuff anymore. I also underestimated the amount of calories I would need due to the heat. I should have brought more gels instead of bars. Eating all these bars became more difficult as the days went by. I would recommend to bring at least one pair of fresh socks, and flip-flops to wear around camp to let your feet air out are indispensable.

Graglia: Well, I admit I should have done better equipment research. My pack was several pounds heavier than what it should have been. The sleeping bag and mat I’ve got were lightweight but clearly not up to par. It was a bit stressful the first day, but I didn’t let that get to me. I made an excellent plan on the diet front, though, consuming oatmeal, bars, almonds, chia and flax seeds and Green Magma. Perhaps next time I’ll remember to pack some soups too, because the craving for a different taste and especially sodium was overwhelming after the third day!

5. What advice would you give a first-time, self-supported stage racer?

Van der Geest: Train with your backpack, train on soft sandy trails, and test your materials—do they fit in your backpack? Are you able to sleep on your sleeping pad? Does your backpack suit you? etc.

Graglia: The best approach is to try out your diet and the sleeping gear before heading out to the desert. Once you’re there, there’s no coming back! Clearly, hard training is the key, and the last month or so approaching the race, I would recommend getting used to having a koala-like thing strapped to your back from start to finish.

6. Tell us about a moment during the Grand to Grand Ultra that made you laugh.

Van der Geest: There was so much laughter during this week (although I can’t remember the jokes being made), but what really made me smile every time were the volunteers shouting, ringing their cowbells, cheering and jumping up and down whenever a runner got to a checkpoint. They had so much energy, it put a smile on my face every time.

Graglia: Perhaps the laughs and cheers we all shared at the finish line! There have been just too many memorable situations shared with all the runners at camp and even more special ones with my tent mates that it would be impossible to point just one out.