A badass Montana race with a little European mountain-running flair 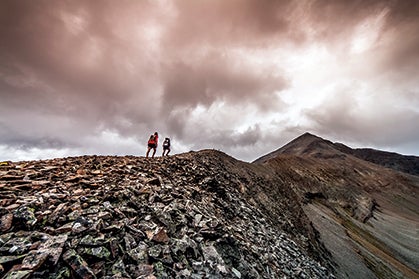 “The trail down was two and a half miles along a ridgeline on nothing but talus, rocks slipping and sliding like skateboards.” Photo by Volkmar von Sehlen.

When a guy is just back from finishing fifth in the world in Europe’s super-competitive 166-kilometer Ultra-Trail du Mont-Blanc and he says a race is going to be hard, you have to believe him.

Mike Foote and his buddy Mike Wolfe, a duo known on the world ultrarunning circuit as the Montana Mikes, wanted to put on a 50K that would be like the European mountain running they’d come to love. Foote says, “I’ve always been drawn to more technical terrain and alpine environments, and the way they command your focus and force you into the moment.”

But they also wanted, according to Foote, to “provide a fun Montana experience to those traveling from afar.” They named their 2013 creation The Rut, made the logo a rack of elk antlers, scheduled it for mid-September and weren’t surprised when a number of people who registered to run ended up canceling because they’d scored a hunting tag and didn’t want to miss the first day of elk season. In autumn in Montana, many of the professors, editors, lawyers, river guides and business owners who run—and often win—hard trail races can be found tromping through the woods with bows and rifles to fill their freezers for the winter.

The great thing about the West is that there is so much public land. The problem with the West, when it comes to putting on a race, is that public land requires complicated permitting—not an issue for The Rut. Says Foote, “The entire event is on the private property of Big Sky Resort, which recently grew its acreage by acquiring Moonlight Basin Resort. They are excited to host our event, and we are equally as excited to be allowed to use their terrain, infrastructure and resources to build our dream race.” So the Mikes had a lot of latitude in creating the course. They also had a lot of altitude to work with. About a third of the race is above treeline at between 7,500 and 11,000 feet. The rest is singletrack through white-bark-pine forest. 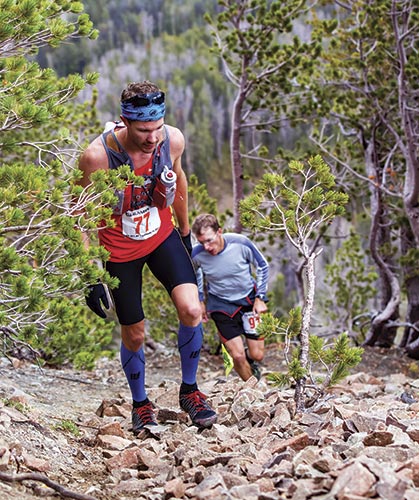 Bring your rock shoes to The Rut. Photo by Volkmar von Sehlen.

Well aware of the changing buffet of Montana’s capricious climate, the Mikes planned a “B” and even a “C” course in the event that Mother Nature decided to get frisky. Native Montanans like to point out that their state has had snow in every month of the calendar year. Indeed, minutes before the pre-race briefing, one volunteer wondered if he might be spending the night running—and re-marking—the course. The forecast called for lightning.

Race morning, it only rained, though Lone Peak, the 11,166-foot summit, wore a cloud for most of the day, making the trail hard to spot—and, at times, obscuring even a hand in front of a face. The trail down was as bad, or worse: two and a half miles along a ridgeline on nothing but talus, rocks slipping and sliding like skateboards.

Kevin Twidwell, of Missoula, Montana, a veteran of many trail races, said, “I was awed by the beauty and scared to death at the same time.” His training partner Ken Ellis commented, “Usually my concerns are pace, exertion and hydration—not falling off the course.” Five days before he had to perform on The Tonight Show with Jay Leno, John Wicks—drummer for the band, Fitz and the Tantrums—ran The Rut. “It was one of the biggest thrills of my life,” said a man who regularly gets asked to autograph bare breasts. 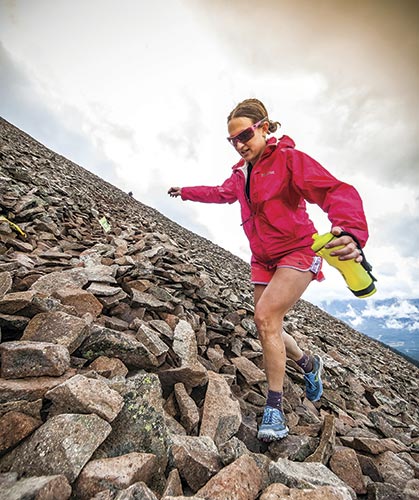 “Usually my concerns are pace, exertion and hydration – not falling off the course.” Photo by Volkmar von Sehlen.

During the awards ceremony, there were still two runners on the course, 50-something brothers from Boise, Idaho. Lance Lewis had been struck by an SUV while cycling a year before and had been warned he might not walk again. His brother Lamar told the story to aid-station volunteers along the course, and the tale was passed forward. Lance had suffered, among other injuries, a broken left leg, broken left arm, broken back, broken ribs and a concussion.

“I decided during the second week after my accident I did not want to be a victim or a burden on society or my family,” Lance explains. As for The Rut, he says, “I knew it was way above my capabilities at the time, but I figured the benefits of the training outweighed the downsides. The training was brutal. Two weeks before the race, I fell on a trail and reinjured some tissue around my hip. I could not walk for a couple of days and was encouraged by others to pull out of the race. That was not going to happen.”

After the last award was given out, and the clock ticked down to the cut-off time of 11 hours 30 minutes, the two Lewis brothers came running to the finish, reaching the line in 11:29:40. The big crowd cheered wildly. Tears spilled.

For those who want to be part of the event, but may not be ready for—or interested in—running the 50K, there’s a 12K option almost entirely on singletrack. Though Foote warns, “It’s no walk in the park. There are some steep and punchy climbs and descents to hold your attention.”

And this year they’ve added an even shorter, even harder race, a Vertical Kilometer. Foote explains: “This is a uphill race going directly from the resort base area to the summit of Lone Peak, gaining 1,000 meters [3,280 feet] in just over 2.4 miles.”

In addition, Foote promises this year’s 50K course will be even harder: “We plan to incorporate a brutally steep climb up onto the technical and beautiful Headwaters Ridge early in the race. This will add another 1,200 or so feet of climbing.” 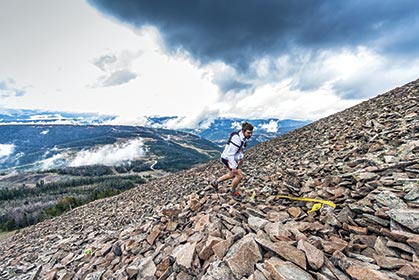 This year’s The Rut 50K will be the final race of the Skyrunner World Series, and will add 1,200 feet of climbing to its already-tough course. Photo by Volkmar von Sehlen.

It has to be harder: The Rut 50K has been added as the final race in the Skyrunner World Series and will be part of the inaugural U.S. Skyrunner Series. Ian Sharman, director of the U.S. series, says the race was selected for both series because “the course embodies the goals of Skyrunning—to include steep, rugged routes at altitude with spectacular views. Many U.S. trail races are less steep or less technical than the traditional Skyrunning events in Europe so all the events in the U.S. series are at the more extreme end of the scale.”

The Mikes were also a reason The Rut was selected: “One of the important guarantees of quality events is having race directors who really get what extreme mountain running is all about,” says Sharman.

Foote says he wants to provide an American showcase for runners from around the world and bring a little bit of European mountain-racing culture to Montana. He wants to grow the race into a “full weekend of events that draws large participation numbers and truly celebrates the sport and culture of mountain running. In addition, we really encourage the spandex and cowbells. The smoking? Not so much.” 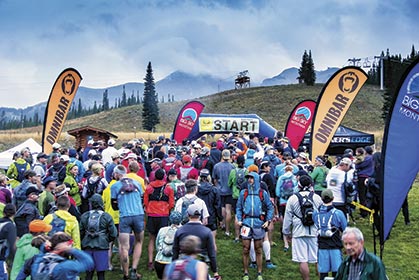 After Victory at JFK, The Sky’s The Limit For Adam Peterman

The Trail Runner’s Guide To Skiing