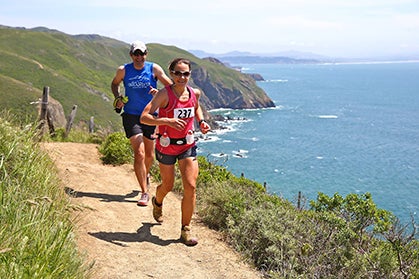 The Miwok 100K on May 3, 2014, had all the ingredients for an ideal ultra trail race. An improved route traversed the sublime landscape of the Marin Headlands and captured iconic views of the San Francisco Bay area. Well-organized volunteers provided abundant support. The blue sky stayed sunny but not too hot. And the finish-line party radiated positive energy in the picturesque aging-hipping hamlet of Stinson Beach.

The only thing missing? The top dogs who in prior years made Miwok more interesting from a competitive standpoint. Past participants such as Dave Mackey, Mike Wolfe, Hal Koerner, Anton Krupicka, Kami Semick, Nikki Kimball, Krissy Moehl and others of their caliber didn’t show up. This year, lesser-known regional standouts and up-and-comers led the men’s and women’s fields.

Champion master’s runner Gary Gellin of San Francisco, 45, was the only elite-level competitor who seemed to recognize and embrace the quality of the race. Whereas many of his fellow competitors made April 12’s Lake Sonoma 50-miler their early-season “A” race and warm-up for June’s Western States 100, Gellin says he deliberately viewed Lake Sonoma as a “B” race and focused his energies on running his best possible Miwok three weeks later.

As a result, Gellin ran away with the win in 8:56, more than 40 minutes ahead of the next finishers.

“The Miwok 100K is a fantastic stepping stone for Western States, just eight short weeks away,” says Gellin. “Marin County is a very special place and makes for one of the best venues for trail running in the world.”

Race Director Tia Bodington was neither surprised nor disappointed that more of the sport’s speedsters didn’t fit the 19th edition of the Miwok 100K into their calendars. “These things go in cycles—races get hot, the big names do them and then they move on to do something else,” she says. “Miwok’s draw is the beauty of the course. My goal is to focus on every runner, rather than focusing on the elites.”

If anything, Miwok seemed more popular than ever. Many of the 437 starters—the largest field ever—eagerly ran it to earn a ticket for the 2015 Western States 100 lottery, which last year tightened its qualifying standards by eliminating 50-mile races. Only a handful of 100Ks count as qualifying races for the WS100 lottery, Miwok being one.

Bodington felt both pleased and relieved by this year’s race, given that she had to adjust the course repeatedly during the past three years due to demands by the parks’ governing bodies. “We’ve had several years of trouble with meeting all the permit requirements, with weather and with finding a new start/finish area,” she says. “This version is the Miwok I want to keep.” 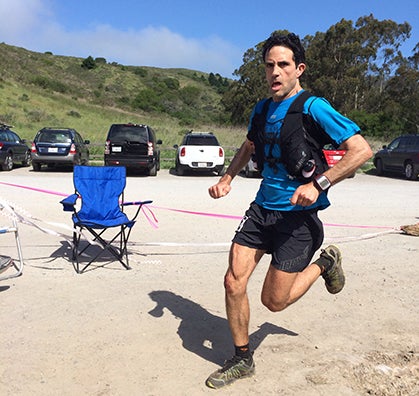 Gary Gellin runs into the Tennessee Valley aid station at Mile 36, on his way to winning the Miwok 100K. Photo by Paul Grimes.

Overall, 342 starters, or 78 percent, finished under the “official” cutoff time of 16 hours. Bodington gave medals to a small number of others who finished between 16 and 16:30, since it was her desire to keep the finish cutoff at 16:30, but the park management required that runners get off the mountain earlier.

Consequently, the most drama happened at the back of the pack, as runners chased tighter cutoff times. Among them was 72-year-old Eldrith Gosney (see profile, “Smile Away the Miles”), determined to finish her 10th Miwok.

Gosney reached the penultimate aid station with only four minutes to spare. She then tackled a 1,000-foot climb in the dark to reach the top of Cardiac Hill along the famed Dipsea Trail, about three miles from the finish. At the final aid station there, a ranger told her she couldn’t continue because of the late time and because it was “too treacherous” since she didn’t have a pacer.

“I begged, ‘Please, please, please, let me finish. I’ve come all this way,’” Gosney recounts. “I said, ‘Shouldn’t there be a few minutes extra for the really old runners?’ I played the ‘old’ card. It didn’t work.” Gosney says the ranger indicated she could continue if she had a pacer.

Gosney then took off her bib to indicate she was running on her own, and headed for the finish. A volunteer followed her, offering to pace her and carrying her bib.

Gellin calls this new Miwok course particularly challenging because “the race is front-loaded with easier terrain, and the majority of the climbing takes place in the second 50K on extremely tired legs.”

The old course, from 1996 to 2011, climbed approximately 10,000 feet—less than the current route’s 12,500 feet—and was based closer to the Golden Gate Bridge at Rodeo Beach. The top men’s times hovered around eight hours.

In 2012, Bodington moved the race HQ to Stinson Beach and devised an exceedingly difficult and slightly long course (see earlier story, “A Monster Miwok”). Then, in 2013, she modified the route again—but, last year’s Miwok was shortened to a 60K due to 11th-hour concern about fire hazard.

Steep climbs through redwoods on singletrack with numerous steps and switchbacks bookend this version of the Miwok. The middle section’s more runnable fire roads and wide trails make the course more difficult insofar as the terrain is not so technical as to justify walking.

On the women’s side, the eventual winner methodically moved from fourth to first. Lisa Hughey, 34, of Livermore, California, won in 10:50.

A relative newcomer to ultrarunning who ran her first 50K in 2012, Hughey is having a breakthrough year, which she credits to the coaching of Ian Sharman. Two weeks before Miwok, Hughey placed second and broke the course record at a tough 50K on Mount Diablo, and she said she held back at the Diablo race with Miwok in mind.

The new Miwok also was notable for being more “green.” Aid stations eliminated cups (runners had to carry refillable bottles or cups) and set up separate bins for food scraps and recyclables, so the race generated a minimal amount of real trash. Bodington also routed runners up a trail near Muir Beach that goes through an organic farm so they could see and contemplate where food is grown.

Only one wrinkle interfered with this year’s course, which should be ironed out next year: unexpected construction on a section of trail forced a detour onto about a mile of paved road.

The 20th Miwok 100K will be May 2, 2015, and will accept fewer than 450 entrants. Bodington will hold the lottery in December; see the race website for registration details.

Sarah Lavender Smith, a contributing editor at Trail Runner who blogs at TheRunnersTrip.com, finished the 2014 Miwok 100K in 13:15—about an hour slower than she had hoped. She can confirm Gellin’s assessment that the second half of the course is harder than the first.