Seven days of running and hiking across vast desert terrain, covering some 250 kilometers while carrying calorie-dense food and essential gear on your back, isn’t for everyone. But a growing number of extreme trail runners and fastpackers view a multi-day, self-supported race as the next frontier in adventure and challenge.

Until now, attempting that challenge has meant traveling to remote corners of the world, such as Morocco for the Marathon des Sables or China for the 4Desert Series’ Gobi crossing. More than a few U.S. runners probably looked at the cost and time required to travel to those destinations and shelved the dream.

Colin and Tess Geddes, along with ultrarunner Terry Madl, designed the inaugural Grand to Grand Ultra with those American runners in mind. From September 23 through 29 North America’s first staged, self-supported footrace will cover 160 miles from the majestic North Rim of the Grand Canyon (elev. 5324 feet) in Arizona to the pink-hued, lesser-known geologic wonder called the Grand Staircase Escalante National Monument (elev. 9360 feet), which sits in between Bryce Canyon National Park and Glen Canyon National Recreation Area in Southern Utah.

RELATED:Five Ways to Know if a Stage Race Is for You

The Geddes—the event’s husband-and-wife co-directors, who live in British Columbia—and Madl, the third co-director handling logistics, also wanted to attract runners from all over the world with the opportunity to cross a distinctive, visually dramatic region of the United States. They expect about 70-percent of the participants to be from outside of the U.S. and have already registered runners from several Western and Eastern European countries, South Africa, Australia and New Zealand, Korea, Hong Kong, Kuwait, Jordan, Serbia and Canada.

If you want to join them to run the equivalent of back-to-back marathons with a 50-miler mid-week—with a backpack—then there’s still four months left to train and register. The cost? $3200. 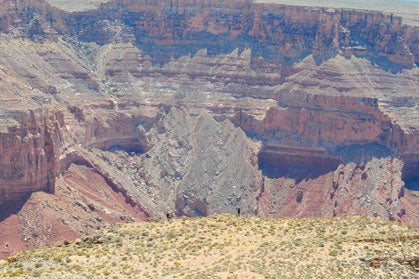 “We’ve got huge fixed costs, and that’s the type of fee we need to charge,” says Colin Geddes, noting it’s less than the registration for other international multi-day desert races. “We want to build a quality event in Southern Utah that becomes one of the world’s great footraces so that anybody who aspires to do a staged race will want to do it.”

Aside from the unique course in the heart of the American Southwest, the Geddes hope to distinguish the Grand to Grand with a high quality of service, emergency medical response and sanitation.

Tess says she participated in staged ultras in other countries where runners got lost due to poor course markings, or, they became seriously injured and did not receive timely treatment (and the whole camp became ill from a lack of hygiene). For the Grand to Grand, Tess says, they’re taking extra precautions for reliable course marking, medical care and search and rescue. They’re also providing toilets, hot water and custom-designed 10-person tents—relative luxuries when it comes to multi-day ultras in remote locations.

The region’s temps in late September should be fairly hot (80s and 90s) during the day and cool at night. The terrain will vary from hard-packed sand to soft dunes to forested trails, and shallow river crossings to rocky climbs in and out of canyons.

Colin, an investment banker originally from Scotland (not a serious runner himself), got the idea for the Grand to Grand while crewing for Tess at a 50-miler in the Florida Keys in May of 2010. He had never been to her international ultras because their destinations were so far flung and he couldn’t get the time off from work. Tess, an ultrarunner from the Philippines, has run the Marathon des Sables, the Sahara Race in Egypt, the Atacama Crossing in Chile, the Libyan Challenge, the Desafio al Desierto in Argentina and other staged ultras around the globe. 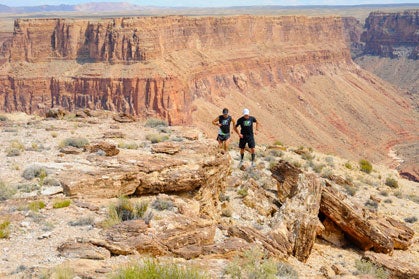 Driving a van behind her as she ran in Florida, and again later that year when he crewed for her at the Javelina Jundred, Colin began imagining the potential for a world-class, week-long ultra somewhere in the U.S. or Canada. “I figured it was time for North America to have an event like this because there’s a real interest in staged races around the world,” he says.

Tess’s friend and fellow ultrarunner Terry Madl joined the Geddes to co-found Ultra Challenge America LLC, and the three spent much of 2011 developing a plan and scouting locations, particularly deserts.

Terry, who has run the Marathon des Sables three times along with the Badwater Ultramarathon, mentioned the Grand Staircase formation, and they began to focus on the swath of open land north of the Grand Canyon. The end result is a course whose exact route is secret—participants will find out the day before the start—but a small-scale map and description on the website reveal the general area through deserts and some forests.

The Grand to Grand Ultra is partnering with the charity impossible2Possible (i2P), which takes youth on international adventure expeditions to teach leadership and inspire positive change. i2P’s founder, ultrarunner Ray Zahab, whose accomplishments include running across the Sahara for 111 days, joined the event’s founders in late April to run parts of the course and see the Grand Canyon for the first time.
“Ray got out of the car and just started running,” Tess says. “For him to be blown away by the course was huge for us, because name a place in the world and he’s been to it.”

The home base for the Grand to Grand Ultra is the small, economically struggling town of Kanab near the Utah-Arizona border. Colin says Kanab’s community leaders are eager to get the town on the map as a trail running and hiking destination. “This is a big deal for them,” says Colin. “The response we’ve been getting from the town is nothing short of miraculous.”

Sarah Lavender Smith is a writer from the Bay Area who blogs about trail running and travel at TheRunnersTrip.com. She’ll participate in the Grand to Grand and cover the experience for Trail Runner.