The Dipsea is an unusual race that makes some unusual champions. 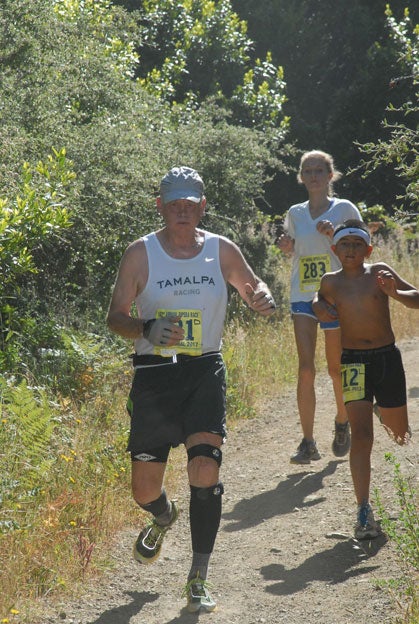 When a 72-year-old wins a highly competitive trail race on a tough course, it would normally raise eyebrows.

Granted, Hans Schmid’s Dipsea victory is noteworthy because he is the oldest winner in the 102-year history of the race, which was run in Marin County, California, Sunday (the previous holder of that title was Joe King, who won at age 70 in 1996). So why is this sort of result not out of the ordinary? The race features staggered starts to handicap the 7.5-mile event by age and gender.

“Usually the young kids catch me at the end,” says Schmidt, who did not run competitively until he was 63.

Due to the head starts, the demographics of Dipsea winners are hardly what you might expect for a 7.5-mile footrace that features steep descents and highly technical footing. Not only are the winners often outside the 20-to-29 age group, many times, the overall winner is female. In 2010, Reilly Johnson, then eight years old, became the youngest winner in Dipsea history when she edged 68-year-old Melody-Anne Schultz by seven seconds.

Alex Varner, 26, of Carrboro, North Carolina (originally from San Rafael, near the course), clocked the fastest overall time in 49:01, good for fourth. Lundy ran a 57:38.

“[Lundy] was not in peak physical condition, but she made an incredible bid to win the race,” says Dave Albee, who sits on the Dipsea Board of Directors. “[Varner] had to pass more than 400 other runners on a difficult and narrow course in 7.5 miles and he did it in 49 minutes. That’s incredible.”

The 7.5-mile course runs from downtown Mill Valley to Stinson Beach, ascends to Cardiac Hill, at 1300 feet, up three flights of stairs (688 steps in total) only a quarter mile after the start. It descends through Muir Woods Trail and Steep Ravine Trail, where the trail narrows and is obstructed by wet rocks and roots all the way to the finish, which offers a wide view of the Pacific Ocean.

“It was an unusually warm day. When you don’t see fog hanging over Mount Tam on race day morning it’s concerning … and I was surprised there were not more runners who suffered from dehydration,” Albee says. “We are incredibly fortunate to have the support of multiple government agencies—from local to state to national—who assist in making this race safe and smooth, or as smooth as one can get on a hilly, tight course.”

He also noted the event relies heavily on volunteers (utilizing over 300 of them) and has resisted sponsorship since its inception.

The last Dipsea winner who also clocked the fastest time was seven-time winner Sal Vasquez, who accomplished both in 1985 with a 45:56.

Flight of Fire Half Marathon

Jorge Mejia of Las Vegas, won the Flight of Fire Half Marathon in the Red Rock Canyon outside his hometown Saturday, crossing the line in 1:48:55. He finished 20 seconds ahead of Andrew Brown of Gold River, California, who clocked a 1:49:15, and over seven minutes ahead of third-place Doug Robinson of Indianapolis, who finished in 1:56:34.

Christel Elliot of Tacoma, Washington, won the women’s race and placed 10th overall in 4:25:23, less than a minute ahead of runner-up (11th overall) Kathleen King of Kent, Washington, who crossed the line in 4:26:08. Una-Melodie Miller of Langley, British Columbia, finished third (15th overall) in 4:29:47.

Complete results, plus results for the 19.2-mile and 9.6-mile races, can be found here.

Indian/Celina Challenge
David Eckhardt of Newburgh, Indiana, won the Indian/Celina Challenge marathon in 3:46:01 Saturday in Hoosier National Forest, Northern Indiana. He was over 24 minutes ahead of runner-up Doug Ambler of Cape Girardeau, Missouri, who clocked a 4:10:25. Evansville, Indiana’s Daniel Shirley was third in 4:20:22.

In the women’s race, Cynthia Heady of Finchville, Kentucky, won and placed fourth overall in 4:25:55, just over two minutes ahead of second-place Michelle Lenahan of Evansville, Indiana, who was fifth overall in 4:28:10. Roanoke, Virginia’s Kristin Hunt was third (ninth overall) in 4:39:12.

In the half marathon, Lamar, Indiana’s Cody Stein won in 1:30:44, just under seven minutes ahead of runner-up Greg Fraze of Velpen, Indiana, who finished in 1:37:43. Tell City, Indiana’s Jason Sprinkle was third in 1:38:54. Janna Hendrix of Owensboro, Kentucky, was first in the women’s division and 16th overall in 1:52:51, besting second place (and 18th overall) Andrea Goldman of Richland, Indiana, by almost two and a half minutes (Goldman clocked a 1:55:19). Leah Hoffherr of Evansville, Indiana, finished third among women and 22nd overall in 1:56:35.

“It’s a punishing course that requires patience and determination,” says Race Director Chris Hollinden, who also noted registration is capped at 150 because the race is in a remote location. “Getting to aid stations is a nightmare.”

Complete results, including results for the eight-mile race, can be found here.