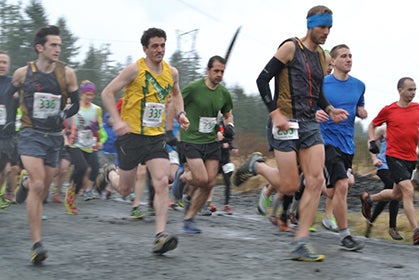 More than 300 runners gathered in Olympia, Washington this past weekend for the Hillbilly Half Marathon, the La Sportiva Mountain Cup’s second race (Another Mountain Cup race, new to the 2014 series, Georgia’s Assault on Garland Mountain, also took place on Saturday.) The Hillbilly Half takes runners up and down the technical and challenging Rock Candy Mountain through dense coniferous forests, a course honored as one of the region’s “Gnarliest” by Outdoors NW Magazine.

This year’s race was made even gnarlier thanks to cold temperatures, bone-chilling precipitation and powerful winds. At times, gusts were so strong that even the registration, refreshment and vendor tents suffered damage. Beyond the heart-pounding hills of the course itself, several runners reported stray bullets whizzing through the treetops over their heads.

Several miles into the race, the course passes closely by a shooting range that ordinarily poses no threat to passersby. However, some locals found it prudent to fire some tracers into the woods through which racers passed. Though at first it caused significant concern, most racers shrugged off the fact and simply “moved quickly through that section” and “stayed low” when the bullets sounded close.

One runner posted later on the event’s Facebook page: “I thought it was all Hillbilly authenticity. Wow! Officially the craziest race I’ve done … glad nobody was hurt.” The race directors responded, “We are fans of controlled crazy … the wackjob in the woods, not our kind of crazy.”

Despite the conditions, Bret Ferrier, 31, of Ogden, Utah, won the race in 1:23:08, less than two minutes ahead of second-place finisher Justin Ricks, 34, of Colorado Springs, Colorado. Says Ferrier, “I knew going in that I was ready to race and that I wanted a gap in the field by the turn around point, which was really my goal for the course.” Third place in the men’s field went to Matthew Byrne, 38, of Scranton, Pennsylvania, again just minutes later.

The course was a stark contrast from the first race in the Mountain Cup several weeks ago, Moab’s Red Hot 33K, where the course was hard-packed with sandy washes.

“Thanks to the precipitation on Saturday, the [Hillbilly Half] trails were extremely muddy, which forced me to be more cautious,” says Ricks, who won Moab’s Red Hot and is currently leading the Mountain Cup. “The tall trees and cloudy skies added a different element to the race, as well. It was harder to see the trail.”

Paige Pattilo, 25, of Bothell, Washington, blazed in at 1:38:51 for the women’s win and fifth place overall. According to Ian Achey at La Sportiva, Pattilo came in so fast that she kept running—no one was able to track her down following her win. Second place went to Bellingham, Washington elite Maria Dalzot, 25. Though Dalzot explains that she didn’t have the strength or speed to catch Pattilo in the last few miles, she finished sixth overall and less than a minute after the first place woman. Third place, and 10th overall, went to Sarah Kjorstad, 38, of Helena, Montana.

Dalzot found her advantage in the race’s immediate climb, leading the women’s field from the beginning. “I found myself alone by the half mile,” she says. “Then, at the turn-around, I saw that the second-place woman was 15 seconds back. I pushed it as hard as I could, hoping to increase the gap. I never looked back and kept my lead until I was passed on the downhill service road, one mile to the finish. It was disheartening, but I ran a good race and in hindsight there was nothing that I could have done better.”