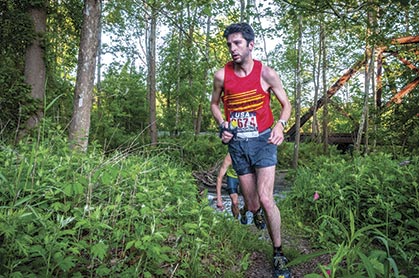 Zachary Ornelas on his way to a sixth-place finish at Ithaca’s Cayuga Trails 50. Photo by Joe Viger

In just its second year, the Cayuga Trails 50 is making a strong bid to become the most competitive 50-miler in the country. This year, former Olympians, major trail-race champions and the most famous mustache in trail running (Matt Flaherty) all showed up to toe the line and vie for the USA Track and Field (USATF) 50-Mile Trail Championship’s $10,000 prize purse.

Fresh off of a 2:33 Boston Marathon effort in April, former Olympic Marathoner Magdalena Boulet, 40, of Oakland, California, said she needed plenty of mental fortitude to tackle all the stone staircases and steep climbs that pepper the scenic, waterfall-laced Cayuga course. “I had done no stair training and the downs started to hurt so bad,” says Boulet. “Around mile 48, I thought, the body can do amazing things when the mind is strong.”

Her struggles didn’t keep her from cruising across the finish line in 8:22 for the women’s win, nearly half an hour ahead of second-place female finisher Krissy Moehl, 35, of Boulder, Colorado. Ahead of them, the excitement of the men’s leaders unfolded as Chris Vargo, 26, of Flagstaff, Arizona, led a small pack of elites including Matt Flaherty, Jordan McDougal, Yassine Diboun and a relatively unknown runner, Tristan Williams.

At each aid station, the lead runners asked volunteers and each other who Williams was. Would his pace hold? They soon got their answer. Williams steadily pushed his way up through the pack, eventually passing Flaherty for second place and finishing just five minutes behind Vargo.

The 28-year-old Williams came from Jackson, New Hampshire, with just a few ultras under his belt. As a carpenter for the Appalachian Mountain Club, he works on projects like building and repairing backcountry huts—so spends much of his time hiking with heavy supplies. He also runs trails daily, and does regular hill repeats and intervals.

“I feel like I do some serious work during my training,” says Williams. When he heard about the elite field coming to Ithaca, he jumped at the chance to test himself against the best.

“[Williams] ran the smartest race of any of the runners,” says race director Ian Golden. “He clicked off miles at a consistent pace, not getting caught up in what was going on around him.”

Vargo, who’d already bagged a few wins this year at the Way Too Cool 50K and Whoo’s in El Moro 50K, was pleased with his triumph at Cayuga. “I came out here to test myself against a fast field and I was so pumped to pull it off,” he says. “The course was killer, and I was running scared from the final checkpoint trying to hold on to the win.”

Just finishing the race this year, let alone winning it, is an impressive feat. With temperatures soaring into the 80s and 10,000 feet of elevation to reckon with, 54 of the 230 starting runners dropped out—almost twice the drop rate of the previous year, when temps maxed out in the 60s.

Moehl says she’d imagined the course as mostly runnable, but that assumption likely did many runners in. “The roots, rocks and stairs beat your legs up pretty badly,” says Moehl, “and you find out the hard way that you should have walked some of the climbs.”

The same weekend, Ithaca also hosted the Trails In Motion Film Festival, a series of short trail-running documentaries, as well as the music- and arts-oriented Ithaca Fest.

With national championship medals around their necks, both Chris Vargo and Magdalena Boulet could be found hanging out long into the evening, cheering in the final few racers.

“I am just as motivated by these final runners as I am by the guys who pushed me to win today,” said Vargo.