Wind, a Little Snow—and No Littering 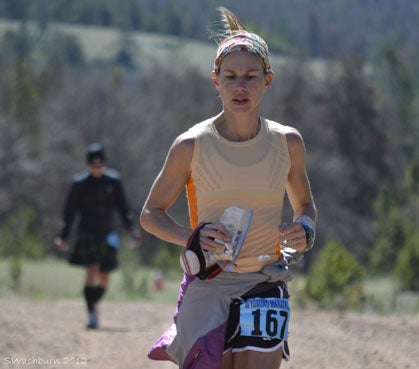 Jeremy Bradford of Denver won the Rocky Mountain Double Marathon in Laramie, Wyoming, Sunday in 8:19:05. He weathered the cold, windy conditions to finish nearly five minutes ahead of runner-up Christopher Dale of Granby, Colorado, who crossed the line in 8:23:52. Third overall and first among women was Salt Lake City’s Erin Clark, who finished in 8:57:52.

The Rocky Mountain Double Marathon, run in conjunction with a single marathon and half-marathon, is a 52.4-mle race through Medicine Bow National Forest. Run primarily on dirt and gravel roads—they comprise approximately 77 percent of the full and double-marathons course and all of the half-marathon course—the course starts at 8700 feet, descends to 8100 feet, climbs to 8600 feet and finally drops to 8000 feet, at which point marathoners and double-marathoners turn back (double marathoners will run the out-and-back twice). Half-marathoners turn back during the first climb.

“It was the windiest race on record, with 35-plus mile-per-hour winds,” says race director Brent Weigner, who also says snowflakes could be seen falling near the end of the race. “Because of the winds the course was slow. No records this year.”

Weigner also noted it was the first year the race had more runners from Wyoming than neighboring Colorado.

None of the ascents on the course are dauntingly steep, but, according to Erin Whitney, who completed the half-marathon in 2003, the gradual inclines catch runners off guard as late-race fatigue sets in.

“The finish line welcomed me at the top of a long grueling hill, the same one that I had greeted so happily going the other direction at the start,” she wrote in a race report that has since been displayed on the race website.

As the sun rises runners are treated to a quiet, backcountry course, with views of green grasslands and monolithic Vadauwoo rock outcroppings. “The miles passed surprisingly quickly, and I’d like to think that the beautiful race setting had something to do with that impression,” continued Whitney.

Like many races now, this one requires runners to carry water bottles to cut down on trash from disposable bottles and cups, and any runner caught littering is disqualified.

But the race is also known for its simplicity. The race, whose motto is “… where the race director promises you nothing, and he delivers,” has no awards, either for age groups or overall. “Folks give themselves permission to have fun at our races because there are no trophies,” says Weigner. “Nobody comes expecting to run a PR or qualify for Boston. They come to enjoy Medicine Bow National Forest and their fellow runners and family members.”

Jon Clark of Rancho Santa Margarita, California, won the Mount Wilson Trial Race in Sierra Madre, California, Saturday with a time of 1:02:53. Sixteen-year-old Aaron Zambrano of Sierra Madre was less than a minute behind in 1:03:45, and Eli Rodriguez finished third in 1:04:09.

This was the fifth annual Mount Wilson Trail Race, which is run in the Sierra Madre on the historical Mount Wilson Trail. The trail was built in 1864 by Benjamin I. Wilson, and closely followed a trail used in 1771 by the Gabrielino Indians to carry timber from the mountain to the construction site of the San Gabriel Mission. The 8.6-mile course gains 2100 feet of elevation between the start and finish.

Christina Clark of Guelph, Ontario, won both the women’s and overall races in the Sulphur Springs 50K Saturday in Ancaster, Ontario. She clocked a 3:59:46, over seven minutes ahead of men’s winner Dave Rutherford, of Waterloo, Ontario, who ran a 4:06:54, and nearly 35 minutes ahead of women’s runner-up Jennie Haw of Toronto, who finished in 4:34:20, good for eighth overall. Anna Dowse, also of Toronto, was third among women and ninth overall in 4:46:59. Mitch Free of St. George, Ontario, was second among men and third overall in 4:07:35, and Rick Whitford of Ottawa, was third among men and fourth overall in 4:15:35.

In the 50-mile race, Adam Hill of Orillia, Ontario, won in 6:49:44, nearly 10 minutes ahead of Corey Smith of Nottawa, Ontario, who clocked a 6:59:32. Matthew Vanpopta of Hamilton, Ontario, was third in 7:09:22. Kat Clewley of Burlington, Ontario, won the women’s race and placed sixth overall in 7:51:35. Toronto’s April Boultbee finished seventh overall—second among women—in 8:02:44, and Dawn Hamel of Coldwater, Ontario finished third (ninth overall) in 8:07:36.

Complete results, as well as results from the 25K, 10K and 100-mile relay races, can be found here.

The women’s course records went down in both the half-marathon and 10K races at the Jenkins Mountain Scramble in Paul Smiths, New York, Saturday.

Matthew Harrison of Lake Placid, won the half-marathon in 1:45:51, well ahead of runner-up Chris Repka of Porter Corners, New York, who finished in 1:57:56. Matt Cook of Saranac Lake, New York, was third in 2:07:01. In the women’s race, Phyllis Clookey of Plattsburgh, New York, and Amy Farell of Tupper Lake, crossed the line together in 2:14:05, good for fourth and fifth overall, besting the previous course record by over three minutes. Heidi Holderied of Saranac Lake finished third (12th overall) in 2:32:16.