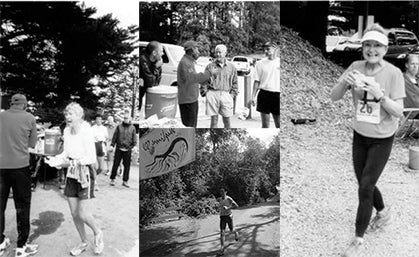 Scenes from the Skyline 50K  in years past, clockwise from left: Helen Klein, then 79, on her way to winning her age group in 2002; Errol “The Rocket” Jones and Race Director Emeritus Ken Gregorich chat away; Eldrith Gosney and her trademark smile; Mark Sherman takes the overall win in 2002. Photos courtesy of Adam Ray.

Editors’ Note: This piece originally appeared at The Runner’s Trip and was our top pick among entries into the March Trail Runner Blog Symposium: What would you nominate for the best “old-school” trail race and why?

And Dan Williams, 33, blazes through the San Francisco Marathon in 2:32.

“People told me I’d be good at trail ultras, and I said, you gotta be kidding—a marathon is far enough,” Dan recalls.

But the idea sticks, the challenge beckons. A month after the marathon, in the heat of August, he enters his first-ever ultra, the inaugural Skyline 50K in the hilly terrain overlooking Oakland. “I thought if I slowed down, I could probably hang on another five miles.”

He toes the line wearing racing flats—but he doesn’t slow down much. He wins his first ultra and the first-ever Skyline 50K in 3:33 (a 6:51 pace).

“Anytime you win something, you think, ‘Maybe I am good at this.’”

Thirty-two years and 21 Western States 100 finishes later, you could say that yes, Dan, you are good at that.

Williams, now 65, was part of the first wave of Northern California runners to graduate to ultras and get hooked, thanks in no small part to the Skyline 50K. Classic ultrarunners made Skyline a classic race because they ran and volunteered at it throughout the past three decades—people like Tropical John Medinger, Errol “The Rocket” Jones, and the lady I admire more than any other, Eldrith Gosney.

Gosney, now 72, has finished some 150 ultras, including 10 Skyline 50K’s. Back in the mid-’80s, when she was running only shorter distances on pavement, she volunteered at the Skyline 50K with her road-running club.

“It was my first experience with seeing ultrarunners, and it was a real eye-opener,” Eldrith says. “The weather was especially hot that day, and at that time, I was a ‘clean and fussy’ street runner. We had a few patio lounge chairs, and some of the runners collapsed on them.  Several runners were very dirty from the dust sticking to their sweaty bodies, and there were so many with bloody legs and arms from scrapes and falls. …

“I went home wondering why on Earth would anyone ever put themselves through such torture! I vowed that I would never do that to myself. What a liar I was.”

The Skyline 50K is purportedly the longest continually run trail ultra in the country. I can’t verify that claim, but I’d believe it.

When I first heard about ultrarunning in the 1990s, I knew of only three events: Skyline, AR and States. The Skyline 50K was a stepping stone to the American River 50-miler, and then maybe, if you were really crazy, you’d take the leap and do Western States. It was as simple as that.

Now, we can choose a different trail ultra almost every weekend here in Northern California. While that’s mostly a good thing, it’s also true that the sport is going through growing pains and generating tensions. But the Skyline 50K just keeps on keeping on. It doesn’t sell out right away (if at all), and it’s not on iRunFar‘s radar. It attracts a few really fast guys and gals, like Leor Pantilat and Jennifer Pfeifer, but it’s nothing like Way Too Cool or Chuckanut. It’s for first-timers and old-timers more than sponsored “elites.”

Like a favorite old shoe, it feels good and doesn’t wear out. Always friendly, never flashy.

And then there’s the RD, Adam Ray. Since he took the helm as race director several years ago, I can’t help but have a soft spot for this event. Adam has been my close friend since high school and got me started running 20 years ago, after all those years of partying together (but that’s another story).

Adam has a busy life and a niggling knee, so he’s not in the thick of ultrarunning quite the way he used to be. But I know that come late July and early August, Adam will put his whole heart and energy into Skyline. His extended family members will come from out of town to help him prepare the course markings, the aid station bins and the food. He’ll cover his front yard with five-gallon water jugs and gear, and he’ll sweat the details of the finish-line barbecue, where he roasts a whole pig and serves it on a picnic table, head and all.

These days, Adam noted, “There’s something very different and special about these single-distance, classic races.” He was referring to the growth of trail races by numerous relatively new companies that put on events combining several distances (10K to 50K), usually over routes with multiple loops. “Skyline has a special home-grown feel, in a way what you’d expect from a community throwing a block party.”

Oh yeah, I almost forgot to mention the course.

Funny thing is, the course isn’t the main draw for me. The tradition and the people are. I love pretty much every slice of the East Bay Regional Park District’s greenbelt, and this 50K route is no exception, but it’s honestly not the most beautiful or interesting 50K course in the region. Suffice to say it’s pretty, it’s challenging, it’s worth it.

It starts and finishes at Lake Chabot, near the town of Castro Valley, which straddles the East Bay Area’s urban-suburban split. Runners head north and cross into Oakland’s Redwood Park, on a combination of fire roads and single-track, through eucalyptus and redwood groves. They climb a total of about 4,700 feet, and summertime heat, sometimes reaching the high 90s, can slow them down significantly. (See here for course details.) 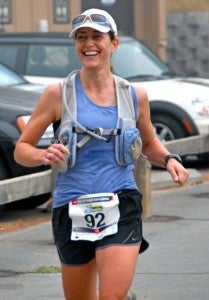 The author running the Skyline 50K in 2010. Photo by Morgan Smith.

Sarah Lavender Smith is a frequent contributor to Trail Runner who blogs about trail running and travel at TheRunnersTrip.com. She’s getting ready to celebrate her 45th birthday by running the Miwok 100K and then will gear up for the Grand to Grand Ultra in September, which she wrote about for Trail Runner in 2012.