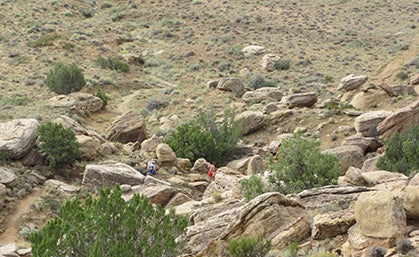 Photo courtesy of the Paatuwaqasti 50K Run and Relay

The Paatuwaqatsi 50K Run and Relay stands out in the list of races included in the 2012 Trail Runner Trophy Series because it is not a race, not really. It is a monument to community, heritage and preservation. In the spirit of giving, it is a non-profit event, operated entirely by volunteers, and hosted by the Hopi people in Northern Arizona to celebrate the sustaining connection between water and life in the way they have done for centuries—by running.

In a paper for the American Studies Association, Matthew Sakiestewa Gilbert describes the Hopi as “a people who [place] running at the center of their cultural identity.” He wrote that “Hopi footraces transcended the individualistic concepts of personal gain and self-accomplishment,” held the cohesiveness of community and served to honor the entirety of it. An ancient Hopi myth tells of a race between two tribes. One runner prepared with miles and miles of independent training while the other accepted protection against bad spirits in the form of a magic powder from Spider Grandmother. “The Hopi runner who chose to accept [this external guidance, who] did not rely entirely on his physical abilities [won the race]. He listened to his elder, he drew upon the strength of his culture, and he received power from the spiritual world of his people.”

The Paatuwaqatsi Run connects the village foot trails to seven natural springs. The run’s focus on water aligns with the ancient belief that running brings rain. The Hopi people ran for practical purposes as well, relying on their feet in hunting, inter-village competition and transporting critical information in times of war. The trails are seen as the veins of the village and thought to keep the springs healthy. They open to the public for this event alone, one day out of the year.

The run involves nearly 5000 feet of elevation change over trails that range from soft, sandy singletrack to exposed slickrock mesas. In addition to manning organized aid stations, villagers come out to remote and distant locations all along to course, bringing buckets of water to runners, cheering them on in native Hopi tongue. 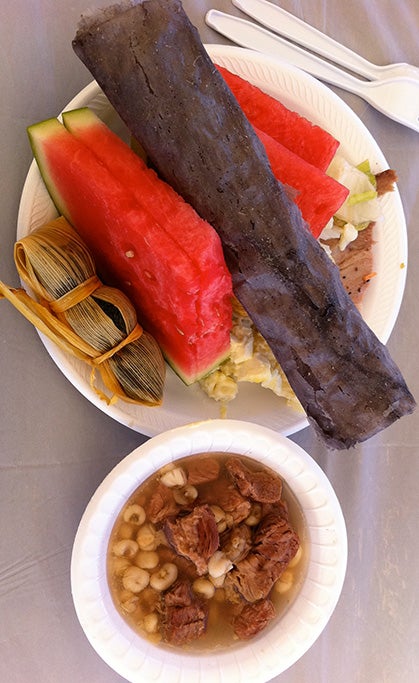 Post-race meal.
Photo courtesy of the Paatuwaqasti 50K Run and Relay.
Just before the start, there is a ceremonial blessing for the runners, after which race director Bucky Preston stands at the line, as he has each year since it’s founding in 2003, and reminds competitors that “this is not a race.” The event’s motto explains this philosophy: “I run in reverence of all living things. In our prayers, may we always remember that water is life.” After five or six hours of hoofing it through the Arizona heat, you’ll seldom find a runner who disagrees with this statement.

“Putting Hopi life values and teaching at the forefront is the purpose of the run,” said Preston, “[In older times] a runner would take one of the many foot trails from the village in the early morning to a spring, take a drink and sprinkle himself with the cold water. … They received strength and were healed of any ailments. Everything at Hopi involves water—water is life. Now, water is being abused. In some places, it is gone and I want to bring awareness to the people.”

The event continues long after the runners have crossed the finish line. Various speakers who work intimately with water usage in their respective communities make appearances, and all participants and volunteers are invited to a traditional Hopi meal. “The generosity of the Hopi, hosting this race and making visitors like myself welcome on their trails, is truly extraordinary. The material poverty that many of them endure is evident to anyone who runs around First Mesa, but this does not keep them from extending every kindness, from the encouragement and gratitude of volunteers and spectators all along the course, to the traditional meal served afterwards,” says runner Andy Roth, a repeat participant. Awards come in the form of handmade Hopi crafts.

Modern Hopi villages rely on crafts and tourism as there is no industry. Meyer explains the struggle to maintain traditional culture, “Sadly, many young people move away to cities to find work and careers. Many villagers still have traditional gardens but it is challenging due to lack of moisture … Some live in traditional manner (no electricity or running water), but most live a life in between.”