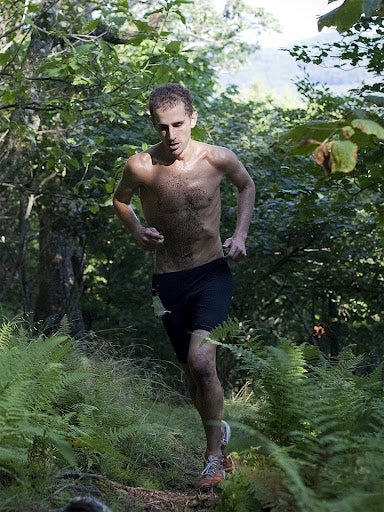 “With a runner like [Mack], you can’t let him take it out because he’ll take advantage of that. I tried to start out the race and make everyone make a choice about whether or not they wanted to go right off the bat,” says Roche, who blazed through the opening miles before allowing Mack to lead up a hard climb. “I waited until right before the top and started a sprint, which might not have been the best idea, but it allowed me to open up a small gap coming off the climb.”

After the first half, the cours rolls through open fields and wide fire roads, before turning to tight singletrack, where competitors cannot see far in front of them. At that point, Roche’s lead may as well have been a mile. “With trails like that it’s ‘out of sight, out of mind,’” he says. “The little lead I had going in was enough to keep expanding.”

Complete results from the men’s race can be found here.

On the women’s side, Silverton, Colorado’s Megan Kimmel won the race by over a minute, finishing in 48:21. Runner up Amber Moran of Arden, North Carolina, finished in 49:35, well ahead of Morgantown, West Virginia’s Maria Dalzot, who finished third in 52:58.

“One never knows who is going to show up for these races, though they do seem to draw the elite track- and road-based crowd a bit more than the average trail race,” says Kimmel. “Because of this, I had no idea how it would unfold. … I was really just hoping for top three.”

Of course, she was quite happy to dominate the event. …

“I decided to leave it up to the beginning of the race to create a strategy,” she says. “Right off the gun I found myself in front at an agreeable pace and I just went with it and didn’t look back.”

Let The Race Come To You