A classic Northwest adventure race, the Mount Baker Marathon, is being brought back to life 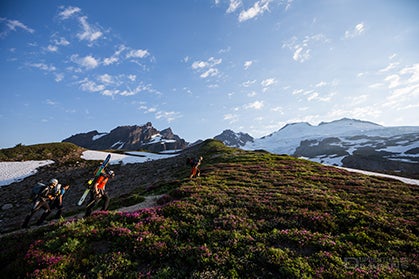 Some 50 miles into their running and mountaineering adventure, the group makes their way toward the summit of Mount Baker. Photo by Chris Duppenthaler.

On August 1, 2014, just past noon, three men stood off the coast of Washington, the waters of Bellingham Bay lapping around their ankles. The summit of Mount Baker—a 10,781-foot snow-packed monolith towering in the Cascades between Interstate 90 and the Canadian border—loomed in the distance and marked the halfway point of their planned journey. They would run the 45 miles from the sea to the base of the mountain, collect crampons, ropes and helmets, ascend five miles of overgrown, virtually non-existent trail, then four glaciated miles to the summit and then retrace their route back to the Bay—a total of 108 miles.

That had been the plan on the team’s three previous attempts, too, but foul weather forced the team to abandon the passage each time, including, once, a lightning storm so fierce it made the ice axes in their packs buzz with electricity. The slopes of Baker were too exposed to risk an ascent in poor conditions.

On their fourth attempt, the runners saw rain on the horizon when they crested a 3,000-foot rise 20 miles into the run, but the weather stayed south and the trio pushed on. They completed the trip in 48 hours 17 minutes, the first step in reviving of one of history’s most unique races, the Mount Baker Marathon, which was held from 1911 to 1913. 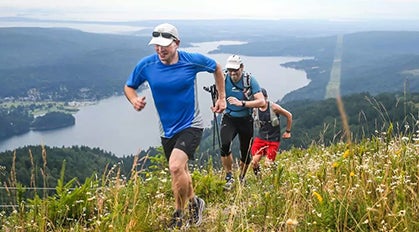 The trio begins their running journey from Bellingham Bay to the summit of Mount Baker (and back). Photo by Stacy Moon.

“All the races in 1911, 1912 and 1913 had storms, so it’s no surprise that it took us four tries before we got good weather,” says Dan Probst, 35, of Bellingham, Washington, an ultramarathoner with credits like the Hardrock 100-mile Endurance Run and Tor des Geants to his name.

Probst headed the group in each of the four attempts organized under the banner of the Cascade Mountain Runners. He dreams of resurrecting the old Mount Baker Marathon, a race in which competitors traveled from Bellingham to Mount Baker by car or steam engine, climbed the peak (verified by a panel of mountaintop judges), descended and raced via vehicular transport back to Bellingham. The winner received $500 in gold coins and a buffalo-hide robe.

The onset of World War I, poor race management and near deaths of several entrants (by exposure and stumbling into crevasses), led the Mount Baker Marathon to a premature end. But Probst, like the town officials at the turn of the 20th century, sees the potential impact such an adventure race could have on the local economy.

With ultramarathons like Leadville and Hardrock resuscitating dying mining communities in Colorado and mountain athletes like Kilian Jornet popularizing the marriage of ultrarunning and alpine climbing, Probst is convinced that a Mounta Baker Ultramarathon from Bellingham to Baker and back will be the next big thing.

But, at the moment, the race still has many obstacles to overcome. A trail must be built (the recent, successful completion of the run followed a mix of paved roads, gravel roads and trails), permits must be issued and congressional approval to traverse the original historic Ridley Creek trail through wilderness must be granted. And before any of that can happen, Probst had to prove to potential sponsors that a 100-mile run with an eight-mile push up and down a snow-covered volcano is actually possible. The climb itself is usually a two-day event for the average mountaineer, but Probst believes the 108-mile round-trip race could be covered in under 24 hours.

Joining Probst on the first weekend in August to do just that were Aaron Poh, 25, a local runner from Bellingham, Washington, and Beat Jegerlehner, 45, of Los Altos, California. 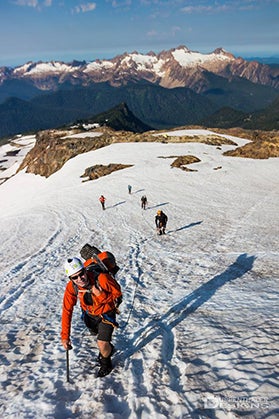 Successful at last: the group approaches the summit. Photo by Chris Duppenthaler.

“It was all about just proving it was possible in one shot,” says Probst. If they could do that, the next step would be to host a race that would use roads and trails to skirt the wilderness area on the slopes of Mount Baker. This temporary version of the race would raise money to build a continuous trail from Bellingham Bay to the base of the glacier.

Probst and the others involved in the project see an unbroken footpath from sea to summit as a bountiful resource for the Pacific Northwest, promoting it as a new National Recreation Trail. “Aside from establishing the race, the overall goal [of building the trail] is so that anyone can come hike or run and camp along the route over multiple days,” says Probst. “It will be a legacy for everyone.”

He hopes that people will find year-round use for the trail outside of the Bellingham-to-Baker race, and he has a hunch (and good historical evidence) that this will be the catalyst for a local economic boom.

In the early 1900s, the event attracted 40,000 spectators to the region. Local businesses have already expressed interest in supporting the race, many even sponsoring the trio’s recent run of the route. On their successful mission, Probst, Poh and Jegerlehner stopped by the Acme Diner en route to Mount Baker for a rest and some breakfast sandwiches.

“I figured we could do [the run] in 36 hours, but we would have had to push hard. And we wanted to get milkshakes,” says Probst. Their decision to opt for a more leisurely pace allowed time for plenty of tasty indulgences along the way and at the summit, many provided by local Bellingham business like Kulshan Brewing and Rocket Donuts.

Aside from inclement weather, Probst doesn’t see the ascent of Mount Baker to be a barrier. “We want to be able to run a 100-person race,” says Probst who plans to install fixed ropes over the more technical sections, with assistance from the American Alpine Institute. “There will be only basic mountaineering skills necessary.”

Probst believes that better race management and modern climbing equipment will help the race be run safely. The proposed course will have a total of 17,000 feet of elevation gain, 8,000 feet of that in the nine-mile ascent of the mountain at the turnaround. 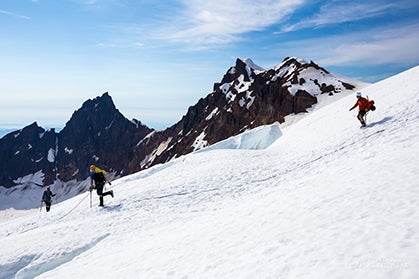 The group makes their descent from the summit of Baker. Photo by Chris Duppenthaler.