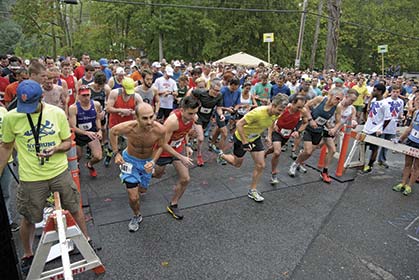 Runners at the 2014 Paine to Pain Trail Half Marathon are off after hearing the starting … musket. Photo by sport-memories.com

This article first appeared in our March 2015 issue.

One morning each fall, in a quiet New York City suburb, a man in a brown colonial-era jacket and tri-corner hat fires a musket into the air, and a crowd of hundreds charges up a hill. This is not a reenactment of some famous battle from 1776, though, but the start of the Paine to Pain Trail Half-Marathon, held annually in New Rochelle, New York, a handful of stops from Grand Central Terminal in Manhattan.

The musket—and the race’s name—is a nod to influential Revolutionary War pamphleteer Thomas Paine, whose cottage marks Paine to Pain’s start. Runners pick up their numbers and goodie bags on the cottage grounds, now a National Historic Site.

Paine to Pain came about because of a different sort of visionary. Over a decade ago, Eric Turkewitz, a longtime runner and New York lawyer who lives in New Rochelle, began exploring the various trails nestled in southern Westchester County, just north of New York City. Turkewitz realized that with a little cooperation between the different government agencies that owned the trails, he could connect them into a 13-mile loop, with a mile of road.

The agencies Turkewitz worked with proved enthusiastic about the idea, and in 2006 the trail network was christened the Colonial Greenway and festooned with a 13-star blaze. For Turkewitz, an avid racer, the obvious next step was to hold a race on the trail—which just so happened to be a half-marathon distance. So, in 2008, he held the inaugural Paine to Pain Half with 50 starters.

“[Paine to Pain] is a giant natural loop that leaps from community to community, so you never run the same trail twice,” says Turkewitz. “The trails are hard enough for ultrarunners to enjoy, yet within reach of the rookie trail runner.”

The Paine to Pain course varies from narrow, technical singletrack to wide, smooth multi-use trail. After their musket-shot sendoff by the Thomas Paine Cottage, runners climb a long, steady road uphill, then bomb down a sharp, quick downhill to the Leatherstocking Trail, named after The Leatherstocking Tales, a series of novels that includes The Last of the Mohicans, written by 19th-century author James Fenimore Cooper, who lived nearby. The trail is narrow and winding, with quick ups and downs, the occasional rock and a few raised boardwalks in mucky sections.

After a quarter-mile road interlude, runners plunge into a large wooded park on the wider, less technical Saxon Woods Equestrian Trail. The course again narrows to mostly singletrack, with a sharp, winding downhill, followed by a short, brutal uphill as the race hits mile 9. From there, the course is mostly flat through the finish at New Rochelle High School, where school cheerleaders are on either side offering encouragement, pom-poms a-flashing.

Paine to Pain has grown extraordinarily popular: each year, it starts a field of 750 runners in four separate waves.

Part of this is due to Turkewitz’s dedication as a race director. The day before Paine to Pain in 2011, I ran a part of the course and discovered a large tree had fallen across the trail. I wrote Turkewitz a note, and by day’s end he’d sent a photo of the cleared path with the message, “Tree down? What tree down?”

And, in a county with a number of road races, Paine to Pain has given pavement pounders the chance to dip a toe, as it were, in the world of trail racing.

“There is a certain camaraderie when running the trails that is different from road running,” wrote Stacey Cooper on her blog after Paine to Pain. “We support each other out there, offer words of encouragement, and even water and gels … We’re all in it together and appreciate the journey.”

Accommodations: There are numerous restaurants and hotels in the area, including a Radisson and Residence Inn in New Rochelle.

More: If you’re in the area, there is an easy group run on the course a few weeks before race day.

Joe Garland first ran on some of the trails that now constitute the Colonial Greenway back in 1971. He first ran Paine to Pain, his first trail race, in 2013. In 2006, he finished third in his age group at the New York City Marathon, but Paine to Pain humbled him.