Richard Costello of Warminster, Pennsylvania, is already known in certain circles—namely those of the XTERRA racing community—for an inspiring feat of self-transformation in preparation for a race. Gearing up for the 2012 XTERRA Trail Run World Championship, which will take place December 2 at Kualoa Ranch on the island Oahu, Hawaii, he has yet again done just that.

In 2010, Costello competed in the XTERRA World Championship off-road triathlon on Maui. He spent the year leading up to the competition growing an impressively lengthy beard only to sacrifice it at the post-race awards ceremony. Needless to say, the “shave it” side of his unique “Shave it! or Save it!” fundraising campaign, in which he asked the public to donate to the Challenged Athletes Foundation in exchange for a vote on whether he kept his beard after the race or shaved it off, won out. 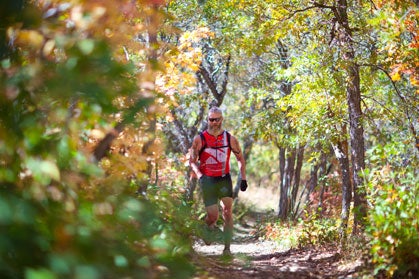 Returning to Maui for the XTERRA World Championship Off-Road Triathlon again the following year, weighing 247 pounds, Costello found himself finishing near the back of the pack, and blamed feelings of sluggishness on poor nutrition and excess body weight.

Costello was no stranger to carrying around the pounds. A former professional strongman in the Scottish Highland Games—the Games being a festival like series of competitions in everything from bagpiping and dancing to a range of “heavy athletics” (caber toss, hammer throw, stone put, etc.) held annually in celebration of Celtic culture and Scottish heritage—he’d once tipped the scales at 352 pounds. Upon his retirement from those endeavors, while flipping channels during a commercial break in the football game he was watching, Costello came across the XTERRA World Championship Off-Road Triathlon. From that moment on, “I was addicted,” he said in an interview with Maui News before the 2010 race. In the six months following that discovery, Costello dropped nearly 80 pounds, toeing his first starting line in 2010 at 230 pounds.

The disappointment he felt in the wake of his less than satisfactory performance in 2011 led him to focus his efforts entirely on trail running, saying it was “an ongoing frustration with my inability to put together a decent run in [my] races that had bothered me the most.” He ran the XTERRA Richmond Trail Run 10K along with a series of races in the XTERRA Pocono Trail Run Series to ready himself for this year’s World Championship.

This wasn’t the extent of his training, however. Costello sought the advice of four-time XTERRA Trail Run Series regional champ, Richard Burgunder, who also lived in Pennsylvania. Having followed his blog, longtrailahead, Burgunder considered Costello “prolific in the adventure sports community.” He was “absolutely enamored by [him] and ecstatic about finally meeting the might beard guy.” 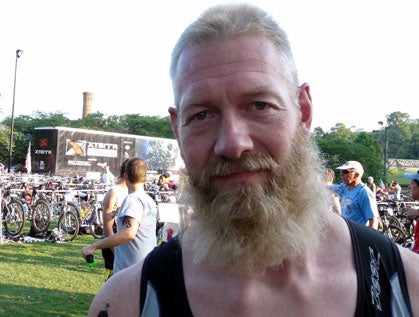 Photo Courtesy of XTERRA
Costello, before the shave in 2010

Guided by the experience, Burgunder created workouts for Costello that focused on technical terrain and uphill running. Costello has been training for the race four to five days a week all year, cross training with swim and bike sessions.

Burgunder, who plans to compete at the XTERRA World Championship Trail Run as well, calls Costello’s transformation “absolutely phenomenal. …  Richard is the ideal role model and active lifestyle ambassador that everyone should look up to for motivation to better their lives.” He demonstrates “immense determination, persistence and immaculate focus [in the face of] adversity.”

Next month, when Costello arrives in Oahu, those adversities will include racing a full 10K farther than he has in any previous running event. The half marathon course will take runners through the trails at Kualoa Ranch, on which the race will take place, are normally closed to the public—though they’ve served as the backdrop for a number of television and cinematic productions, including Pearl Harbor, 50 First Dates, Jurassic Park and LOST. The XTERRA Trail Run World Championship will be the culminating event of the XTERRA Trail Run Series, which consisted of over 70 trail runs of various distances around the world, and will reward winners with over $10,000 in total prize money.

“My personal goals for the impending 21K World Championship race are simply to complete the entire distance, and to feel as though I have put my best effort into accomplishing it performance wise. …The Kaawa Valley venue looks absolutely amazing and beautifully challenging.”