Runner, horse and rider play leapfrog down the trail 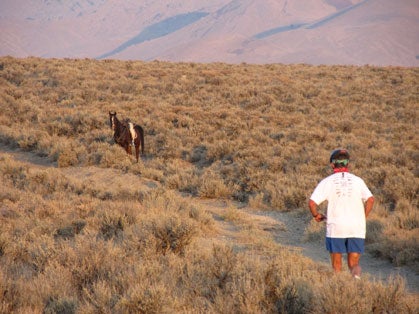 Ride and Tie is a team sport where two runners/riders and one horse combine talents to quickly cover a trail course.  The event is timed although many people find enough challenge in simply finishing.  Ride and tie had its heyday in the 1970s and 1980s and today may be poised to regain some its earlier luster.

Ride and Tie has only a few rules with the main one being that only one rider can be on the horse at one time.  What usually happens is that one team member will canter or gallop ahead on the horse, tie the horse to some natural object such as a tree, and then run ahead on the trail.  The second team member comes to the horse, unties it and climbs into the saddle, rides down the trail passing the other runner, and then the process repeats.  The team leapfrogs down the trail tying the horse at various points and the race isn’t over until all three team members cross the finish line.

Ride and Tie is fraught with pitfalls.  Besides the usual trail-running mishaps such as getting lost, falling, hitting inclement weather, etc., Ride and Tie adds a whole set of additional issues.  You can inadvertently run by and pass the horse, inadvertently get on the wrong horse, the horse can inadvertently get loose and run away, the horse can inadvertently shy at some real or imagined danger and throw the rider and other potential mishaps.  And then there is the whole strategy of placing the ties to best utilize the abilities of the two runners/riders and the horse.  Unlike an ultra or an endurance ride, Ride and Tie is much more spontaneous and there is no time to just grind out the miles on the trail, moving ever closer to the finish.

Our ride the Owyhees was small, very small, with only two teams.  But, the two teams were composed of friends and both teams were evenly matched.  Had there been Las Vegas betting, the betting line would have been even.

Layne Simmons, Dick Root and Will made up one team and they faced off against Ben Volk, myself and Superman.  Superman had an illustrious endurance career and the horse is called Clark while in camp.  Layne’s friend Phil and my friend Cindy volunteered to be the crew at the one vet check located about 25 miles into the ride.

We started at 7:30 a.m.  I was riding around the camp checking the saddle fit and stirrup length when Steph announced, “Ride and Tie, the trail is open!”  Whether the fit was right or not, it was show time.  Superman and I took off after Dick and Will, while Layne and Ben ran behind.  The trail climbed up to a desert plateau and we all got down to business.  About five or six miles and several ties into the ride I came to a 15-hand bay horse with a fleece saddle cover and a yellow tie and began to untie.  “Wait, this isn’t my horse,” I realized, and continued on.  Riding Superman a few miles later, I turned around and said to Dick, “We are not on the course.”  Ben and Layne had missed the turn and left on the wrong desert track.  I went a short way on the track and then doubled back.  I thought to myself, “Ben is a smart guy.  He will figure this out,” and Itook off down the trail to a high vantage point.

I waited and looked back on the trail.  Soon enough I saw movement.  In the early morning light off in the distance I saw one horse and two runners.  We were all back on the trail.  I quickly dropped off, tied Superman to a sagebrush and ran down into Sinker Canyon.

In Sinker Canyon the trail became very technical, with rocks, branches, fences with buckaroo gates and numerous stream crossings.  Soon enough both teams were back together and it was a wild run through the canyon.  We all began to feel that competitive pressure.  This was turning into a race and neither team was going to yield easily.

We climbed out of the canyon and took off across the desert toward the vet check.  Through the next series of ties, no team managed to gain any sort of lead.  We passed each other with every tie.  Just before the vet check, I tied Superman.  Ben was right behind me and he cantered into the vet check, handed Superman to Cindy and ran off down the trail.  I came in, took Superman from Cindy (Superman had reached the pulse criteria or 68 beats per minute) and I took him over to “vet” him through.  An instant later, Will met pulse criteria and he vetted right behind me.  Alright!  I was through first and out first!

Both teams had passed through the vet check in less than five minutes.  Cindy and Phil were left looking at the undisturbed food and water that they had so carefully laid out on the tailgate of the truck with no sign of the runners and horses except the lingering dust in the air.  In this race, with six miles to camp, no one was stopping.

We leapfrogged back to camp shortening the ties and increasing the speed.  Still, no team had a clear lead.  I came to our final tie about a mile from camp.  Ben was the fastest runner in the race and Ben had tied Superman and left for camp.  I could see Layne and Dick and I knew that Ben and I had the race in our hands.  All I had to do was ride in to camp with a sound horse.

Superman took up a nice easy trot as we went up the road to the finish.  Layne and Dick had backed off and we were unchallenged.  I rode into the camp area and the final vet check with a sound horse.  Everything was complete.  Everything, except where was Ben?  Dick, Will and Layne came in, but still no Ben.  We vetted through but the race wasn’t over for my team.  Layne, Dick, and I headed back out the trail and found Ben hustling up the road.  Ben had made a wrong turn in the final mile and the victory went to Dick, Layne and Will.  That’s Ride and Tie!

We finished the course in three hours 20 minutes.  Later that day the fastest endurance riders would run the same course in about four hours.

For me, it was a fantastic Ride and Tie experience .  We were four friends with two good horses.  We had friends as the crew and friends as the vets.  It was held in a venue that has many fond memories for me.  Rarely in a 30-mile race is the finish undecided until the final mile.  Rarely are there only two teams that run side-by-side continuously through the whole 30 miles never once gaining an advantage.  With only two teams and the entire race so close, it was the pure essence of Ride and Tie.