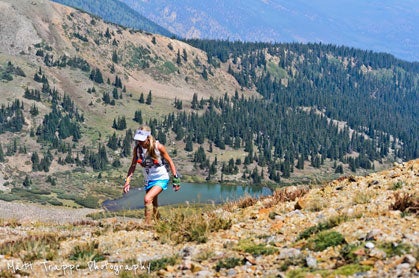 Thomas Lorblanchet had never raced a 100-miler before Saturday. He also says he rarely gets the chance to train in the mountains, or at altitude.

“I decided early to make my own race. I could see from the beginning that we were running very fast,” says Lorblanchet, who ran with the early lead pack, consisting of New Zealand’s Mike Aish and Boulder, Colorado’s Anton Krupicka, before Krupicka pulled ahead after the 50-mile turnaround, on the second crossing of the race’s toughest mountain section, Hope Pass.

Near mile 70, Lorblanchet stole the lead from Krupicka (who eventually fell back to finish fourth) and held it, winning by just under 15 minutes.

Says Lorblanchet, “It was a challenge for me just to finish.”

Meanwhile, Basalt, Colorado’s Zeke Tiernan moved up steadily from fifth at the turnaround, to fourth at the Fish Hatchery aid station, near mile 76, to third after passing Krupicka. Finally, he passed the UK’s Nick Clark, crossing the line second in 16:44:20.

“By far the best part of Leadville is the support I get from my family and friends,” says Tiernan, who grew up in Aspen, Colorado, not far from Leadville. “The spirit of my crew is contagious and it helps fuel me from aid station to aid station.”

Tina Lewis of Boulder, Colorado, executed a similarly thrilling race strategy, passing eventual second-place finisher Liza Howard late in the race and holding a narrow lead: both runners were in the Fish Hatchery aid station, near mile 76, at the same time.

“I was running a lot of the race by myself, so there was no pressure; no one was pushing me,” says Lewis. “I passed Liza before Half Moon [aid station], but she stayed on my heels. After that I just tried to hold onto the lead and I had no idea how far back she was.”

Lewis continues, “I had stomach problems, I was throwing up and I was hyperventilating from Fish Hatchery to the finish.” That did not stop her, however, from pulling away to win by over an hour with a time of 19:33:45.

Howard of San Antonio, Texas, held on to finish second in 20:44:08. Ashley Nordell of Sisters, Oregon, was third in 20:47:58. Aliza Lapierre of Williston, Vermont, fell to fourth after leading during the early stages of the race, finishing in 21:14:32.

Complete results from the Leadville Trail 100, once posted, can be found here.