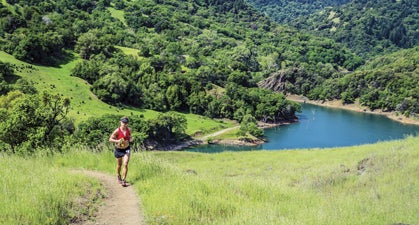 “Relentless” is how Race Director John Medinger describes the undulating singletrack of his Lake Sonoma 50, which has become one of the most sought-after 50-milers on the ultra calendar.

“A track meet” is what the hyperbolic Karl “Speedgoat” Meltzer calls it, given the frontrunners’ speed and the trail’s “buff-smooth” footing.

“A world-class event that is a true blend of Old School and New School,” is how another dean in the sport, Andy Jones-Wilkins, refers to the event’s laid-back atmosphere and high-octane field.

All three aptly describe and help explain the appeal of the Lake Sonoma 50, which Medinger began in 2008 near his hometown of Healdsburg, about an hour and a half north of San Francisco. Add to those factors the springtime setting of California’s wine country, and the result is a race that filled within eight hours last year. The 300 spots might go even faster when registration opens December 15 for the April 12, 2014, edition.

No Fanfare
The runners who gained entry convened last April off a rural road near grassy hillsides and oak woodlands that skirt the banks of Lake Sonoma. No balloon arch, no banners and no blaring sound system signaled the start. In a dirt parking lot, Medinger gathered the runners, and proffered three simple rules:
“Be nice, no littering and have fun.”

“The number of hot shots makes it pretty intense,” says Medinger. The 2013 start list included Max King, Tim Olson, Nick Clark, Joelle Vaught, Amy Sproston and Meghan Arbogast, to mention just six of the several dozen top men and women. “So I try to keep the mood light. My main objective is that it be kind of old school and low key.”

The timing in mid-April also makes it an ideal warm-up for Western States and other high-profile summertime 100s. Plus, it’s part of the Montrail Ultra Cup series of trail races, which awards cash prizes and automatic entry into the Western States 100 (top two males and top two females in each Ultra Cup race).

It’s About the Course (and Party)
For less-competitive runners, the main draw is the trail and its setting. The out-and-back route, with 10,500 feet of climbing and six creek crossings each way, follows the southern curve of a fishhook-shaped lake.

The first third of the course consists of constant hills on singletrack (after a couple of miles on pavement at the start). “They’re deceptively hard, relentless hills—up and down, up and down—but a really smooth trail, so there’s no excuse to walk,” said Amy Sproston after her third-place finish this year.

The trail widens momentarily to fire road, climbs three major hills in the middle portion, and then throws in a mile-long lollipop loop at the turnaround. This loop adds an element of uncertainty for competitors because it prevents them from seeing who’s close ahead or behind, unlike a regular turnaround that allows returning runners to pass the incoming ones.

The final third of the course is slightly more difficult than the outbound portion it mirrors. Not only do the rolling lakeside miles feel more arduous on miles 32 through 50 than they did from the start, but the final few miles also detour to a segment of trail with a couple of cruel climbs.

Along the way, runners are treated to purple wild iris and lupine in full bloom against a backdrop of verdant hillsides reflected in the green-hued lake. Feet stay damp from the creek crossings that can vary from ankle to thigh deep. In 2011, the lake flooded and creeks rose so high that Medinger had to cancel the race.

At the finish, runners savor cold beer and hot tamales in a picnic-like setting, and, the day after, everyone is invited to a post-race gathering at a winery.

Medinger says he’ll keep the event’s size at roughly 300 because of limitations on parking and because “the nature of the race starts to change if it gets to the point where there are so many people that it’s a conga line most of the way.”

When he started running ultras in the early 1980s, Medinger said that races only had a few dozen people and he knew virtually everyone there. “It was like a party almost, and that’s the atmosphere we’re trying to create here.”

Where to register. UltraSignup.com

Where to stay. The Best Western Dry Creek Inn is the recommended motel for the race and convenient to the start/finish area. Bonus: It’s just down the road from Big John’s Market, an excellent independent grocery store.

Where to run. At nearby Armstrong Woods State Park in Guerneville, about 20 minutes from Healdsburg, you’ll run through a giant sequoia grove, and can go as long as 18 miles.

Where to have fun. Wine tasting is an obvious possibility, but there is beer tasting, too—Sonoma County has three of the best craft breweries in the U.S. (Bear Republic Brewing Company, Russian River Brewing Company, Lagunitas Brewing Company). And foodies rejoice—five of Michael Bauer’s top 100 list restaurants are here in this little town of 11,000.

Sarah Lavender Smith is a Contributing Editor at Trail Runner, and blogs at TheRunnersTrip.com.

15 Years In, The Lake Sonoma 50 Is Keeping It Fresh