At many ultras lately—too often, according to some people—the field of competitors will be heralded as the fastest, or deepest, ever.  … 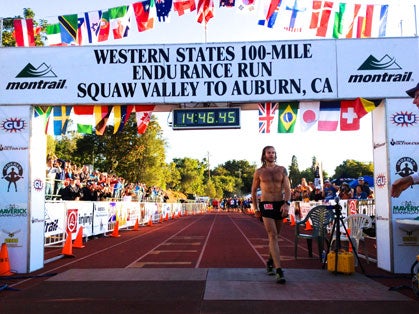 Photo by Bryon Powell of irunfar.com

At many ultras lately it seems as though the field of competitors is heralded as the fastest and the deepest, ever. And the 2012 Western States Endurance Run that runs from Squaw Valley to Auburn, California, was no exception. Records were shattered with the onset of cool weather and a talent-loaded field Saturday.

“I did not think of the record until the Highway 49 aid station (at mile 93.5),” says Olson. “My pacer, Hal [Koerner], told me I could break it, and I said, ‘Oh, cool,’ then just focused on putting one foot in front of the other.”

Olson says he ran conservatively despite feeling good in the early stages, and that it paid off later. “Ryan was really cranking out fast miles on the Cal streets and I did all I could to hold on,” he says. “Before the river I was feeling good, so I gave my all up to Green Gate (mile 80). After I had a little bit of a lead I had the mental intention of not letting up and giving everything I had for the rest of the race.”

In the women’s race, Ellie Greenwood of Banff, Alberta, defended her title and demolished Ann Trason’s 18-year-old course record of 17:37:51, in the process becoming the first female ever to run under 17 hours with a 16:47:19. She finished 14th overall and was well ahead of runner-up Rory Bosio of Soda Springs, California, who still ran the fourth-fastest time in Western States history with an 18:08:06, good for second and 21st overall.

“The race  went really well. I had no significant lows,” says Greenwood, who did not keep track of her splits and only heard she was ahead of her pace from last year (when she ran 17:55:29) at the Rucky Chucky river crossing, at mile 79. “Just after Forest Hill [60 miles], I was concerned I might have gone too hard too soon, but by Rucky Chucky I knew I could hold on and despite the fact that my quads were beginning to feel pretty beat I was still moving at a good pace.”

Dave Mackey of Boulder, Colorado, broke the master’s record with a 15:53:56, placing fourth. Nick Clark of Fort Collins, Colorado, finished third for the second consecutive year in 15:44:09. Last year’s runner-up Mike Wolfe of Missoula, Montana, finished 18th among men (19th overall) in 17:50:09 after falling off due to sickness near mile 75.

The directors of the Black Hills races, which start in Sturgis, South Dakota, the same day as Western States, bill their 100-mile event as an alternative to the storied, and more exclusive, competition in California. They even mimic Western States’ finish, which takes place on a track.

All three times were faster than Adam Schwartz-Lowe’s course record 23:01:42, set at the inaugural race, though the course had been adjusted this year and was shorter as a result.

Complete results, as well as results from the 100K and 50-mile can be found (when available) here.

The Double Dipsea is a chance to run the Dipsea race (see our coverage of Dipsea from earlier this month here) in Marin County, California, twice—once backwards, from Stinson Beach to downtown Mill Valley, and once in the direction of the “single” Dipsea, from Mill Valley to the beach, 7.5 miles each way.

Runners descend 688 stairs, then ascend them on the return; they will also navigate the 1300-foot Cardiac Hill and lots of wet, technical footing in the Muir Woods—all twice. And like the Dipsea, racers are given head starts, with the oldest runners receiving the largest handicap (and women receiving a head start over men in every age group).

The handicapping made no difference, though, for Alex Varner of San Rafael, California. His time of 1:36:31.3 was the fastest overall—even with handicaps factored in—even though Varner, a 26-year-old male, did not get a head start.

Varner recorded the fastest overall time at the Dipsea earlier in June, but finished fourth overall.

And results without handicapping can be found here.