7 nighttime trail races to add to your calendar (sponsored) 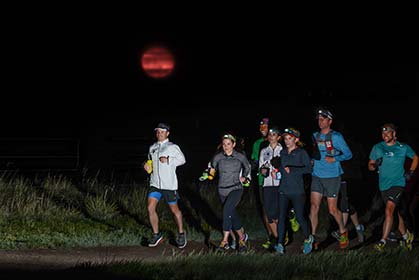 Runners at the Chase the Moon 12-hour at Highlands Ranch, Colorado. Photo by Chris Boyack

This post is sponsored by Petzl. Leave a comment with your favorite night trail race before Saturday, May 1, for a chance to win a Petzl Nao headlamp, MSRP $180. This contest has passed; thanks for your comments!

For trail runners, there’s a lot to like about night races: the unique challenge, the serenity that comes with focusing on your immediate surroundings, the excuse to party in the morning after running through the night. For a unique experience to add to your race calendar, here are seven nighttime trail races that caught our attention.

Related video: Why trail running in the dark is such a thrill 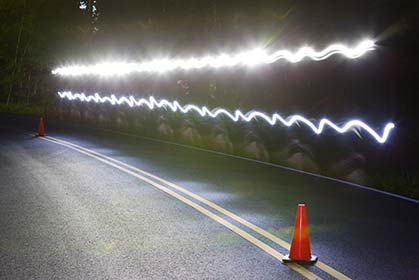 Q: What’s more badass than running a 50-miler in the dark?

A: Running a 50-miler in the dark on a former training ground for spies.

During World War II, the Office of Strategic Services (OSS)—the precursor to the CIA—trained operatives on the grounds of what is now Prince William Forest Park, in Northern Virginia. Today, runners can relive that little piece of history at the OSS/CIA 50 Mile Night Run; two 25.5-mile loops explore “all corners” of the wooded park, according to race director Alex Papadopoulos.

The race starts and (for most) finishes in daylight, and because of the loop format, runners see different sections of trail at beginning and end. Everything in between is in the dark. As Papadopoulos puts it, “The night will remain a mystery.”

2. Rock the Night Away Half-Marathon, 10K and 5K Trail Runs

Members of Trail Nerds, the Kansas City-based running club, have an affinity for night running—and it pays off. “Trail Nerds always excel on the night portion of their first 100-milers,” Ben Holmes, the club’s founder, told Trail Runner a few years ago.

In addition to frequent evening training, the Trail Nerds share their passion for afterhours running by holding several nighttime trail races every year. Rock the Night Away challenges half-marathoners to navigate eastern Kansas’ rocky, rooty singletrack by the light of their headlamps—and gain 3,000 feet in the process. Runners are encouraged to enjoy well-deserved food and “nano-brewed” beer at the post-race party, then stay the night—camping and air-conditioned lodging are available on site. 10K and half-marathon finishers receive glow-in-the-dark medals. 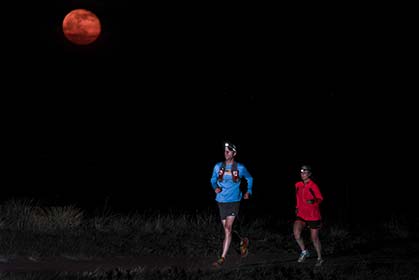 Having enjoyed all-night running at 100-mile trail races, David Manthey and Ben Reeves wanted to bring that experience to those who might not be up to running such an extreme distance. So, last year, they started Chase the Moon, a 12-hour run held just outside Denver, under the light of a full moon.

The rolling, singletrack loop course is “about 95 percent exposed, with lots of tall prairie grass, scrub oak and a few ponderosa pines,” says Manthey—not ideal for runs in the daytime heat, but perfect for views of the full moon, the surrounding foothills it lights up and the downtown Denver skyline, as well as other runners. “You can scan the trail system and see headlamps bouncing up and down and weaving in and out of the gullies, arroyos and bushes.”

Chase the Moon can be run solo, or as a relay with 3- or 5-person teams.

A nighttime spinoff of October’s popular Javelina Jundred, the Jangover takes place on the same singletrack-and-jeep-trail loop as its namesake, in the desert outside Phoenix.

Kicking off just after “moonrise” with the 75K, the Jangover is part of Aravaipa Running’s Insomniac Night Trail Run Series, which stretches from May to November and includes distances from 5K to 75K in the Phoenix area. Among other perks, the race features an iced-coffee bar.

Held in the Golden Gate National Recreation Area, the aptly named Night Sweats Marathon and 15K offers nighttime views of lit-up San Francisco, just across the bay. The course, on groomed trails marked with glow sticks and reflective ribbons, are ideal for the trip-prone and the navigationally challenged. Night Sweats is run concurrently with the overnight portion of a 100-mile race.

6. Into the Darkness 4 Mile 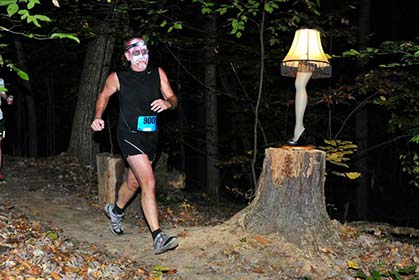 This pre-Halloween event takes runners through the rolling woodlands of Roanoke Valley’s Explore Park. The four-mile course consists of three miles of twisty singletrack and one mile of grass and asphalt road.  “These trails will be marked with reflective arrows, glow sticks, and the occasional surprise,” says race director Josh Gilbert. “Nothing scary, this is a family event … [just] Halloween stuff and the absurd.” 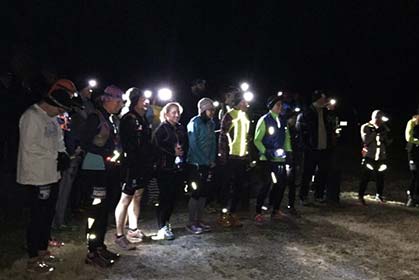 Courtesy of The Night Mare

About as far from a “fun run” as you can get, North Carolina’s Night Mare is a 40-miler night run in frigid February temps with 8,400 feet of elevation gain on wooded, often technical singletrack. Fittingly, it takes place on Dark Mountain, at Kerr Scott Reservoir.

The race has an underground vibe; everyone, from first to last, gets a trophy, a black Pegasus made of wood, and the course is lined with “demotivational” signs—”That looks infected” and “Why are you doing this again?”—though signs at the end of each lap were a bit more upbeat, with cheers like, “Hey sexy legs” and “Nice calves!”