Headlines from the Speedgoat 50K and other weekend races, plus a sneak peek at several new trail shoes for summer 2014 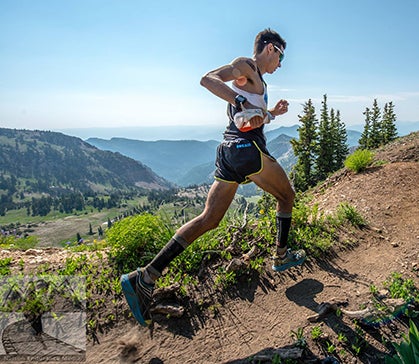 $5,000—that’s how much money Sage Canaday, 28, of Boulder, Colorado, took home from the Speedgoat 50K (read our preview here) Saturday. That includes $3,500 for winning the race, which he did for the second straight year, as well as $1,000 for being the first competitor to the top of the first big climb—Hidden Peak, at mile 8.3—and $500 for going under the course record … sort of.

Why “sort of”? Sage’s time this year was 5:12:30, slower than his 5:08:07 from last year. But Race Director Karl Meltzer altered the course slightly this year and set the “course record” mark, for prize money purposes, at 5:15.

To put the climb to Hidden Peak in perspective, the summit sits at over 11,000 feet, more than two miles above sea level; the race begins at around 7,700 feet. That means in the first 8.3 miles, runners climb over 3,300 collective feet—an average of about 400 feet every mile. That’s a tough start, and they have 23 miles to go after that.

Women’s winner Anna Frost, 32, of Dunedin, New Zealand, won $4,500 for winning the race and making it to the top of Hidden Peak first, but her 6:42:00 did not hit the course record incentive. Runner-up Kasie Enman, 34, of Huntington, Vermont, running her very first ultra, led much of the race and was less than two minutes behind Frost, in 6:43:48. 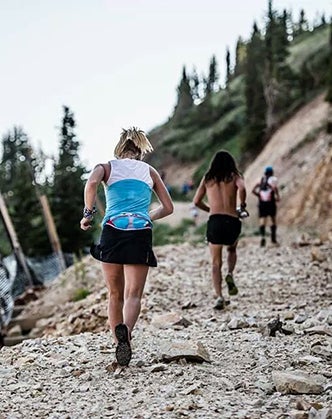 There is sure to be some good-natured ribbing between the “bros” at San Francisco Running Company this week after Galen Burrell, who is sponsored by the specialty run shop in Mill Valley, California, placed ninth at Speedgoat. Store owner Brett Rivers placed ninth at Western States in June (and coined the aforementioned “bros” label in a post-WS100 interview). We presume their General Manager (and Salomon athlete) Jorge Maravilla will place ninth in whichever race he enters next. That Burrell was running in fourth much of the race but got off-course and fell back to the apparently predestined ninth position will probably not ease the teasing.

Check out our video recap of Speedgoat here.

In shorter racing news, the latest installment in the La Sportiva Mountain Cup was Saturday at the Table Rock 27K in Stinson Beach, California. Engaged couple Megan Deakins and David Roche both won and set course records by a collective 690-plus seconds (about 11 and a half minutes), according to Roche, who also pointed out on Facebook that he was only responsible for 30 of those seconds. Check out our full Table Rock 27K recap here.

Oh, and Kilian Jornet, fresh off his course-shattering win at Hardrock, bagged yet another win this month, this time at the Dolomites SkyRace (a 22K) on Sunday. Laura Orguè beat out Emelie Forsberg for the women’s win, after also taking top honors in Friday’s Dolomites Vertical Kilometer.

Each summer we see a slew of new trail-running shoes come out. Some are updates to old models while some are new entirely; some are highly anticipated and some fly under the radar. Here are a few highlights from July 2014, hitting the shelves of your local specialty run shop soon (if they haven’t already).

Keep an eye out for our Fall Shoe Review (in our October issue, on newsstands Sept. 11) for our in-depth reviews of over a dozen new shoes, including all of these. 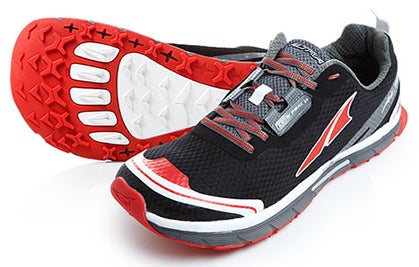 Altra’s marquee trail shoe that features an image of the Wasatch mountain range from the company’s home state of Utah, this popular zero-drop trail shoe got a big lift, which is to say it sits higher than it used to: the 23mm stack height (forefoot and heel) is more cushion than the 1.0 and 1.5. Altra also did away with the hefty mud flap and made the shoe more form-fitting than its ultra-wide predecessors.

2. Hoka One One Huaka 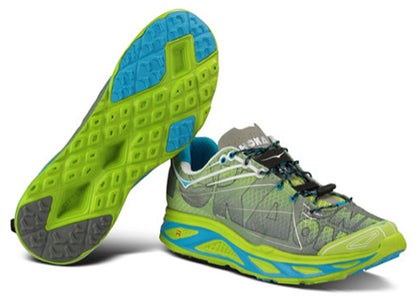 The Huaka is one of Hoka’s new entries into the lightweight and racing shoe market. Sage Canaday first turned some heads by wearing them at the Carlsbad Marathon (he was second in 2:22) and has been wearing them in trail races this year, including last weekend’s Speedgoat 50K. With a 2mm drop and an RMAT midsole, they are lower profile and, well … bouncier than most Hokas. They are lightly treaded and compatible with both road and trail running.

The road version of the Fresh Foam 980 hit shelves earlier this year; the trail version uses the same heat/strike-pattern design in the midsole but extends it to the outsole, where the different-sized pods (larger ones where heavier impact is expected) protrude to create a grippy but natural-looking lug pattern.

The 110v2 is still a minimal-plus trail offering, with a bit more cushioning than its truly minimal brethren like the MT101. V2 got quite the makeover, though, and has an old-school look. It has a less-roomy fit and more aggressive tread pattern.

Trail Running Gear You Can’t Live Without – As Selected By You!