Far beyond your average mud race, this course is designed to break you

These days, race calendars are chock full of obstacle races and mud runs. Most follow a constructed formula of crawling, jumping, splashing and climbing. But northern New Jersey’s Muddy Marathon is far from a run-of-the-mill mud race. The first few sentences on the event website make sure that prospective entrants are warned of its unusual nature. “This can barely be considered a trail race,” the website says. “It is an adventure.”

In 2009, the New Jersey Trail Series, co-owned by Rick and Jennifer McNulty, created the Muddy Marathon. There are three race options: one, two or four loops around Mountain Creek Resort, a ski hill in Vernon, New Jersey. Each 6.55-mile loop has a two-hour cutoff, hardly daunting on a normal trail. But this course takes the toughest route possible, traversing rocks, snow, steep inclines, thigh-deep streams and mud pits—often not following trails—for a total elevation change of over 4,000 feet per loop, reducing most competitors to a walk or crawl. In a race report, 2014 participant Bill Henderson wrote, “The route may have been planned by an ibex.” What’s more, the course changes every year, so past participants don’t have an advantage over newcomers. “I was told if I was ever going to create a race, I should make it one that I would enjoy participating in, and this is what came out,” says Rick McNulty. “I wanted a challenging trail run, followed by a party serving quality beer.”

McNulty designed the course to break down runners and make DNFs likely. Each year, many runners toe the line, confident in their ability to conquer the course. Most are humbled; in 2014, of the 105 total participants, one finished the one-loop distance and one finished two loops. All other starters received a DNF, including every entrant into the four-loop marathon.

The overwhelming difficulty of the course doesn’t weigh heavy on those who start the challenge. “Since most people know they are not going to be able to finish on time, they take it way less serious than other races,” says McNulty. “Runners show up to have a good time and try to push themselves to see what they can accomplish.”

To further this spirit, McNulty gives a rousing, sarcastic speech each year before the race, informing competitors that the course was designed to make them fail and that that is exactly what they will do. And to dull the post-muck pain a bit, an after-party is held at the ski resort’s watering hole, KINK. The first round is taken care of, upon entry, and there are food and beer specials to go around. 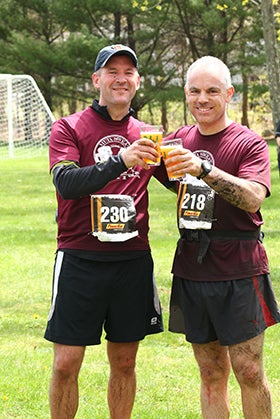 Henderson, the 2014 participant, included some tips for prospective Muddy Marathoners in his race report. He recommends full leg coverage, and even shin guards, to deal with the brush and brier. Gloves are useful for grabbing plants or metal wire for stability on trickier sections. As for shoes, Henderson writes that it doesn’t really matter: “Grip was just not going to happen regardless of what you had on, so just wear something light that won’t absorb a lot of water/mud/snow.” He also suggests “ass-skiing” as an efficient way of going down steep, slick descents.

Whatever strategy racers adopt, though, they’re almost guaranteed a DNF. In the race’s six-year history, only 20 have finished the full marathon distance, and it’s not getting any easier. “There will be [no finishers] again in 2015,” says McNulty. “I plan on making the course that difficult.”