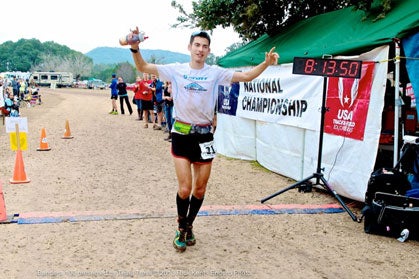 “Execute”—this is the word that breakout ultrarunner Sage Canaday, 27, of Boulder, Colorado, repeated over and over again as he ran through Bandera, Texas, last Saturday, January 12, 2013. And execute he did, capturing first place in the Bandera 100K USATF National Trail Championships—his first win at an ultra championship. His time of 8:13:49 is a new course record, replacing Dave Mackey’s 2011 time of 8:16:48.

Though comfortable temperatures prevailed throughout the race, slick, muddy trails and misty weather proved challenging. Says Canaday, “On the rocky, steep uphills I just concentrated on putting one foot in front of another. On the technical downhills it was a matter of not falling and/or breaking an ankle. On the flats I tried to cruise, but the soul-sucking mud sapped the energy out of every step.”

Michele Yates, 30, of Estes Park, Colorado, who won her first national title last year at the Nueces 50 Mile Trail Run, also in Texas, claimed the women’s title in 10:08:48. Following on her heels, Melanie Fryar, 32, of San Antonio, Texas, cruised in at 10:17:30. Best known for her 24-hour road ultras, Sabrina Little, 26, of Waco, Texas, crossed the finish line in 11 hours flat. Little says it was an imperfectly executed race for her: “I didn’t feel like I ever hit a solid rhythm, but I stayed engaged and enjoyed the experience tremendously.”

Having sprained an ankle earlier in the week, Bandera’s defending champ from San Antonio, Texas, Liza Howard, 40, took fourth Saturday. Howard admitted having doubts that she would even finish the race, but fought through them to claim the women’s Master’s win.

Though the trails at Bandera pose a formidable challenge, most runners embrace it. Heavy mud cakes on to runners’ shoes, while the sharp sotol plants that line the course—described by Little on her race report as having “serrated edges that approximate sporks at Wendy’s”—often leave bloodied scratches on runners’ legs. Says Fryar, “I love the steep climbs and being cut up by sotol and cactus. Bandera is tough, and I love that.”