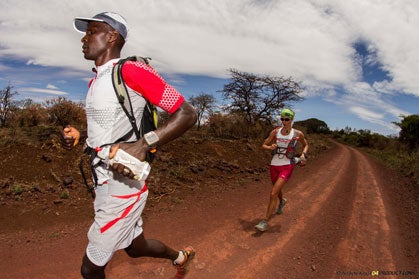 This year, on a mission to bring the sport of trail running to Tanzania, the eight-day Kilimanjaro Stage Run will open to runners all over the world. Put on by Summit Expeditions Nomadic Experience (SENE) and taking place October 19-29, it will be led by Mtuy on footpaths that the event website says “have been used by locals for thousands of years while remaining off the tourist grid.”

D4 Productions, a South African adventure film company, has produced a 24-minute documentary called Mountain of Greatness that offers an emotive and in-depth view of what it is like to circumnavigate Kilimanjaro on foot. It premiered last week at the Trails in Motion Festival in Cape Town, South Africa, and at the Rainshadow Running Film Festival in Oregon, with follow-up screenings scheduled for Boulder, Colorado and Mbahe, Tanzania.

However, the rest of the world can enjoy the movie as well, when the full-length film becomes available for viewing/download from the SENE website on April 5. In the meantime, you can check out the trailer at http://vimeo.com/57847880.

To coincide with the online premier of Mountain of Greatness, Go Trail will also host an online Q&A with Mtuy at 1 p.m. (GMT) on April 5, using the Twitter hashtag #asksimonmtuy.