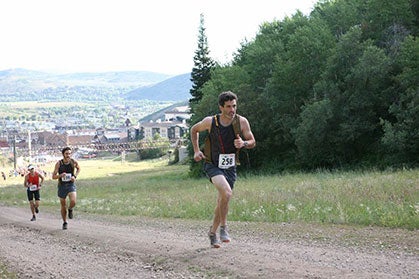 Matt Bryne on his way to first place at the Jupiter Peak Steeplechase on Saturday. Photo courtesy of Everett Russell/La Sportiva.

Competition heated up in Utah on Saturday as the La Sportiva Mountain Cup’s 10th and final race of the series, the Jupiter Peak Steeplechase, enticed hundreds of runners to compete for part of a $25,000 Mountain Cup prize purse. The stiff competition ensured fast times on a grueling 16-mile course—winding up and down Jupiter Peak—a 3400-foot change in elevation each way that included a brutal ridge-scramble to the summit’s flag pole, and a series of tight switchbacks on the way down.

McDougal was very uncomfortable not running the Steeplechase. With five races in he was in the lead, but only by 27 points.  He says, “I knew that Matt was running and although I didn’t have it on my schedule I was thinking of going last minute anyway.  Then a week before I hurt my ankle and that really made the decision for me. If my ankle wasn’t ready to race I might end up being the points Matt needed to catch me.”

Byrne’s main goal for the race was to get on top first and create a lead. He says that, without many technical aspects in the course, “the race was all about climbing hard for the first hour and letting it fly on the way down. Not a whole lot to think about on this course, unless the great view on the top of Jupiter inspired some Jack Handey deep thoughts. I only felt deep breathing.”

Likewise, the top female contender in the women’s Mountain Cup—Megan Kimmel, 32, of Silverton, Colorado—did not take part in last weekend’s Steeplechase. After race nine in the Cup, Kimmel held a comfortable lead of 35 points in the women’s division, with no threat of losing her handle on the overall Mountain Cup win, regardless of what transpired at Jupiter Peak. She won every Mountain Cup race she ran, with the exception of falling second to Alicia Shay in the first race of the series.

Park City, Utah, locals Susan Minneci, 39, and Emma Garrard, 32, crossed the finish line at their hometown race in strong times of 2:14.35 and 2:16.34 for first and second place, respectively, in the Steeplechase. Maria Dalzot, 25, of Bellingham, Washington finished in third (2:18:23), which snagged her fourth place overall in the Mountain Cup.

Due to a case of Achilles bursitis earlier this year, Dalzot was only able to compete in two of the five Mountain Cup races she’d originally hoped to run. Like Byrne, she hoped to lead out of the gates at the Steeplechase. Says she, “I am a strong climber, so my goal was to lead up the mountain, if possible. You never know who is going to show up and what their strengths are.”

Indeed, she initially held the lead on the 3000-foot climb to the top of Jupiter Peak (topping out around 10,000 feet), but struggled toward the end with tired, shaky legs, and so eventually surrendered her lead to Minneci and Garrard.

Says Dalzot, “I was right about one thing: it was a challenge.”

Full results from the Jupiter Peak Steeplechase race can be found here.