… and Americans represent at home and abroad, plus a new speed record on the Pacific Crest Trail 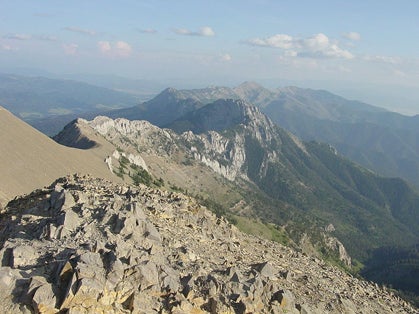 19.65 miles … or 20.55 miles. Either of those could be the approximate distance of the Ed Anacker Bridger Ridge Run, a heavily-exposed race across the ridge of the Bridger Mountains outside Bozeman, Montana. The scantily-marked race course covers roughly 6,800 feet of elevation gain and 9,500 feet of descent.

“If you have run this race before, you don’t need a map,” the race website declares. “If this is your first time on the Ridge, you are [sic] well served to get all the help possible.”

The aforementioned extra distance depends on how runners descend from the large white “M” emblazoned on the hillside above the Montana State University campus—the more direct but challenging route will save competitors and PR-seekers 0.9 miles, while more risk-averse participants tack on some extra time in exchange for a more forgiving route down.

As such, Bozeman-based runners hold a decisive home-field advantage, and this year was no exception. Women’s course record holder Nikki Kimball won in 4:02:47 and led a slew of fellow Bozeman residents to sweep the top seven spots (as well as eight of the top nine and 12 of the top 15). On the men’s side, Bozeman’s Peder Anderson bested Salt Lake City’s Derek Gustafson by just over a minute to win in 3:28:41 as Bozemanites took four of the top five spots.

Runners this year were treated to the relative privilege of at least some help navigating: according to Kurt Buchl—co-president of the Big Sky Wind Drinkers, the running club that puts on the race—some challenging sections near Ross Pass and Bridger Peak had course markings, but the only other navigation tools were following someone with course knowledge or roughly following the ridgeline. In 2012, runners had no course markings at all and were left to navigate the trail au natural.

Complete results can be found here, and to get a sense of the race, check out this video trailer for the recently funded Kickstarter project of a full-length film on the race:

Across the pond, Kilian Jornet notched another win at Switzerland’s Sierre-Zinal. He covered the 31 kilometer course, which runs from the Swiss town Sierre to the village Zinal past five 4,000-meter peaks, in 2:31:54. US Mountain Running Champion Joe Gray was second, just one minute and four seconds behind.

In the women’s race, American Stevie Kremer won in 3:03:12, less than a minute ahead of Swiss runner Maude Mathys. Complete results can be found here.

Colorado Springs-based runners Allie McLaughlin (the 2014 US Mountain Running Champion) and Shannon Payne (the 2014 Mount Washington Road Race Champion) will be among those donning stars and stripes for the World Championship in their own backyard.

The Pikes Peak Ascent covers 13.32 miles from Manitou Springs to the 14,115-foot summit of Pikes Peak and is held in conjunction with the Pikes Peak Marathon, in which runners ascend and descend the mountain.

Lastly, as Northwest Public radio reports here, just yesterday the supported record for the Pacific Crest Trail (PCT) was broken by Joe McConaughy, 23, of Seattle, Washington. He took six days off the previous record, finishing in 53 days, 6 hours and 37 minutes. According to McConaughy’s Facebook page, he enjoyed a hearty breakfast of 15 pancakes this morning.

He embarked on his journey in honor of his cousin Colin, who passed away last year at the age of 2 from an aggressive form of cancer called neuroblastoma. To date, he’s raised $28,658.85 (and you can still donate to his effort here) for Cancer Care, a national nonprofit that offers free professional counseling, education, information, referrals and financial assistance to individuals and families affected by cancer.