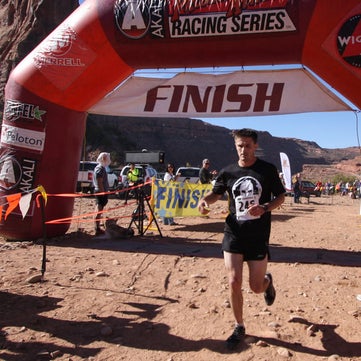 On November 3, in the craggy canyon country of Moab, Utah, the Moab Trail Marathon served as the 2012 USATF Trail Marathon National Championship. The race presented a rugged and unique challenge to an intensely competitive field.

The race’s website claims the title “Mother of All Trail Marathons,” and, post-race, most runners concurred.

Jason Bryant, 40, the third-place finisher and master’s champion from Elkin, North Carolina, said, “Several recent trail championships have been on rather easy courses. I like courses that require a runner to be fast on tough footing.” Bryant called the race a “true trail course,” where “simple speed was not going to rule.”

Obstacles ranged from long, grinding climbs to descents that forced runners to slide bottoms first, to ladders and hand lines along exposed rock. The marathon began in narrow canyons framed by spectacular vertical walls. It teetered on rim tops of deep chasms, and included views of the rocky red wilderness as well as the Amasa back region, where the Colorado River winds through outcroppings of quintessential Moab sandstone.

The trail wound through Pritchett, Hunter and Kane creek canyons, offering clear views of the orange arches in Canyonlands National Park and the peaks and pine forests of the snow-capped La Sal Mountains.

The well-marked course varied from narrow singletrack to jeep and mining trails, and from slickrock to deep, sandy washes and flowing creeks, with approximately 3500 feet of elevation gain and loss.

Over 50 elites lined up on race morning, the first of three waves of competitors. The overall winner, Cody Moat, 34, of Fillmore, Utah, entered the chute in 3:08:26—complementing his victory at the 2012 Spartan Racing World Championships, a grueling marathon distance obstacle course. The second- and third-place finishers, Justin Ricks, 32, of Pueblo West, Colorado, and Bryant, followed competitively, crossing the line in 3:14:39 and 3:17:06, respectively.

The women’s field was also loaded with stacked resumes and new talent. Megan Kimmel, 32, of Silverton, Colorado, second place female finisher, felt the competitive atmosphere. “I knew there were going to be a bunch of great, fast ladies at the race,” she said, “and daunting as that can be, ultimately it makes a race exciting and really
fun.” 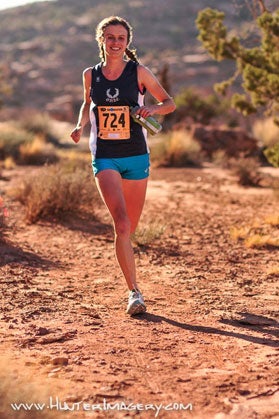 The female champion, Kerri Lyons, a 24-year-old road racer from Salt Lake City, Utah, who runs a 35-minute 10K, finished in 3:27:46, in what was only her third-ever trail race. She was followed five minutes later by Kimmel, and five minutes after that by Michelle Suszek, 30, of Littleton, Colorado. A $2100 cash purse was split between the top-five male and female finishers.

The course was mapped by world-class local runner, Danelle Ballengee. The 41-year-old recent inductee into the Colorado Running Hall of Fame has claimed four Pikes Peak Marathon wins, three Primal Quest adventure race victories, and six “U.S. Athlete of the Year” wins. A course created by Ballengee was sure to be demanding.

The Moab Times Independent noted that the route passed the location of Ballengee’s renowned accident in 2006. In that incident, Ballengee survived a 60-foot fall and two dangerously cold nights with an array of shattered bones; she was rescued by the worry of a self-titled nosy neighbor who reported her missing, and the heroic efforts of her dog, Taz, who sought out and brought emergency personnel to her remote location. The race’s proceeds benefit the Project Athena Foundation, the nonprofit brainchild of endurance racer Robyn Benincasa, born in 2009 out of her own trials coping with and recovering from severe osteoarthritis and numerous resulting hip surgeries. The organization provides scholarship sponsorship to women returning to adventurous activities after suffering setbacks.

A trial of more than miles alone, the Moab Trail Marathon offered an organized and exciting championship with a backdrop as stunning as it was technical. “The desert is aesthetically different from the mountains and so beautiful,” says Kimmel. “The temperatures and weather [there] in early November there would be hard to beat anywhere.”