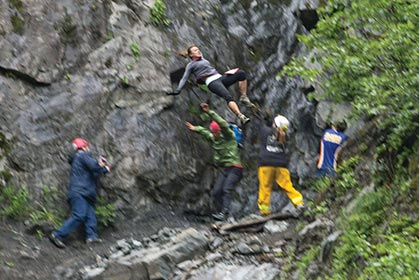 It was about 8 p.m. local time on July 4 when Seward, Alaska’s Fire Department received word that 66-year-old Michael LeMaitre of Anchorage, was missing. Earlier that day, LeMaitre had started his first Mount Marathon Race, a grueling 5K that climbs to the 3022-foot Mount Marathon peak above Seward, Alaska, before plunging down a dangerous descent where runners choose their own route over rocky footing and past several cliffs. There are no signs along the route.

It’s a course that poses a danger for race rookies like LeMaitre, according to Cindy Clock, Executive Director of the Seward Chamber of Commerce, which organizes the race. She says, “If you’re not very capable and/or very familiar with the route, the cliff area and the scree can be dangerous.”

Clock says LeMaitre was last spotted race day by on-course volunteers around 6 p.m. The volunteers, who had been on the mountain for 10 hours, had completed their duty and were descending when they encountered LeMaitre, who was in last place, just approaching the mountain’s summit. The race had no official cutoff time, and since the mountain is open to the public for hiking, LeMaitre was allowed to continue.

“They did not perceive that he was in any danger,” says Clock. “He confirmed he was doing fine. He was just taking it slow and intent on finishing the race.”

That evening, when LeMaitre had not returned, his family reported him missing. By 9 p.m. a search was in full force. Over the next several days, the search parties grew to almost 70 people, according to Seward Fire Chief David Squires, and included helicopters, technically trained volunteers from the Alaska Mountain Rescue Group, dogs and support from the Alaska Air National Guard.

But crews found no sign of LeMaitre. On July 7, with no progress made and resources dwindling, search efforts were scaled back. According to Squires, “Some operations continued until July 15. The search effort was called off that day by the family and the Fire Department due to deteriorating weather and mountain conditions.”

At press time, LeMaitre had still not been found and was presumed dead. He is the race’s first fatality since it began in 1915.

Two other runners sustained serious injuries in this year’s race. Matthew Kenney, 41, of Anchorage, continues to make a slow recovery after a fall from a cliff ledge on the course left him in a coma and with a compound leg fracture. Salt Lake City resident Penny Assman, 34, broke multiple ribs after a similar on-course fall (pictured here).

Prior to the race this year, former race director Chuck Echard had written a letter to the Seward Phoenix Log expressing his opinion that the race field should be decreased—the event, he contended, wasn’t for everyone. “[The race] was never meant to be a fundraiser for the chamber,” he wrote. In the 1980s, when Echard was director, the senior men’s and women’s field was capped at 200; this year, it was 375.

Echard says this year’s race highlighted the need to shrink the field. He says a smaller field could prevent the already precarious course from becoming overcrowded and compromising runners’ ability to choose the safest path down the mountain.

Safety on the Course

Clock says the race organizers might consider incorporating cutoff times, but that ultimately, racers assume a certain risk when they run up and down a mountain. “We don’t claim that it’s safe,” she says. “We tell people that you run it at your own risk. And potential participants should practice [the course].”

Women’s winner Holly Brooks, also of Anchorage, contends that the risk involved is simply a part of the race. “The race is inherently dangerous and everyone knows that going into it,” she says. “Every Mount Marathon rookie is required to watch a graphic safety video the night before the race. They show crashes, people on backboards and lots of blood.”

Still, Echard echoes the advice that newcomers can cut their risk dramatically if they simply check out the course—in person—ahead of time. “There’s no substitute for actually walking the course, for checking out the chute area and seeing what’s best for you,” he says.

This article originally appeared in our October, 2012 issue.