La Sportiva Cup competitors tear it up in Texas 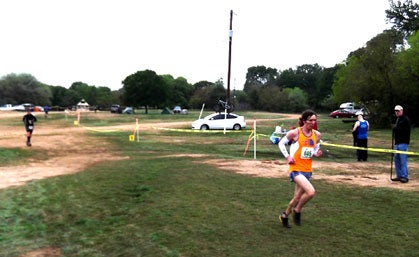 The fourth La Sportiva Mountain Cup race took place this weekend in Smithville, Texas, with the Hells Hills 25K—a loop course of mountain-bike singletrack throughout the Rocky Hill Ranch area that challenged racers with numerous tight corners. Hells Hills also offers a 50-miler, 50K and 10K race distances, though only the 25K is part of the Mountain Cup.

Despite a major storm last week, the trails were relatively dry with only a few muddy spots—and though the initial forecast for the race was hot and sunny, runners enjoyed a breezy, overcast day.

The 25K started off fast, with Justin Ricks, 33, of Pueblo West, Colorado, leading the pack out of the chute, followed closely by Jordan McDougal, 25, of Warrenton, Virginia. McDougal says he enjoyed the technical layout of the course at the beginning, but after the first half, “It just started wearing on me.” It didn’t stop him from dominating, though; he moved into the lead and took first with a time of 1:36, several minutes ahead of second-place finisher Ricks and, in third place, Texas local Erik Stanley, 27.

On the women’s front, Melanie Fryar, 32, of San Antonio, Texas, opened up a sizable gap on Alison Bryant, 34, of Elkin, North Carolina, who struggled with a lingering hamstring injury. The two women finished in 2:00 and 2:08, respectively. Several minutes later, Texas local Katie Visco, 27, crossed the finish line for third place.

McDougal’s victory gives him the lead in the 2013 Mountain Cup standings. Despite her absence from Hells Hills, Megan Kimmel still holds a firm lead in the women’s Cup.