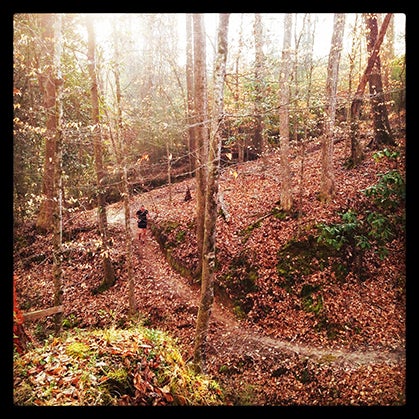 “It’s kind of a joke,” says Race Director Jeffrey Beck, referring to the name of his latest race—the 777 Inferno Stage Race, to be held for the first time on June 21– 22, in Louisiana’s Kisatchie National Forest. “In gambling, three 7s is lucky, but it’s ironic because a race held on the summer solstice in the South is going to be unbearably tough with 100 percent humidity.”

The stage race will consist of three separate legs (each between 22 and 26.2 miles), the first starting at 7 a.m. on June 21, the second at 7 p.m. that evening and the third at 7 a.m. on June 22. Each leg of the race will begin at a different trailhead—from Kincaid Lake to Caroline Dorman and ending with the Wild Azalea Trail. The idea for running a stage race was sparked when Beck and a friend ran the Rock Creek Chattanooga Stage Race last June.

Beck is no stranger to the trail-running scene. In the last year he’s raced the Frozen 50K in Boise, Idaho, Black Warrior 50K in Moulton, Alabama and the Stump Jump 50K in Chattanooga, Tennessee. Since 2009, he’s directed races under his company, FORGE Racing, which have included Dirty Soles, Headhunter, Hells Hills, FURTIVE, Battlefield and Thunderbird—all of which include 5K, 10K or half-marathon options.

“The idea of starting FORGE Racing came while I was living in Knoxville, Tennessee, from 2000 to 2005,” says Beck. “The trail-running community was vibrant there and I began running.” But Beck explains that as a Louisiana native, he knew that no one was putting on races in his home state. In 2009, after returning to Louisiana, Beck started FORGE Racing under the premise of “giving runners the best opportunity to experience running and nature in its most raw and sincere state.”

Beck is unsure how many runners to expect this year.

“I’ve been putting on races for so long that I don’t fear this unknown,” he says. “The first year is always quirky, but the runners who participate this year will sell the race by word of mouth for next year’s race.”

Louisiana trail runner Lane Gremillion, 40, will be participating in the inaugural race in June—“this race is almost right in my backyard, so it was no brainer for me,” he says. Gremillion has finished a host of 50 and 100-mile races.

“I’m a little nervous about the race because of the hot conditions,” explains Gremillion. But, he adds, “One nice aspect to these trails is that they’re littered with cold, spring-fed creeks. Trail running in central Louisiana in the middle of summer is a real test of your mental and physical boundaries.”

Registration is now open. Options include running the whole shebang solo, picking two stages to compete in, or doing the event as a 3-person relay. Awards will go to the solo combined fastest times for the top three males and females, with all under-18-hour finishers winning a 777 Inferno-branded Patagonia jacket.

Want to learn more? Visit www.forgeracing.net/inferno-stage-race for details and registration.