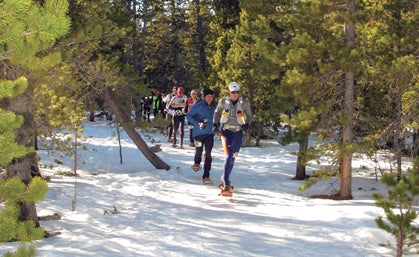 The author, Travis Macy, in the lead at the 2013 Sourdough Snowshoe Race, Nederland, Colorado.

“As you know, finishing positions and times are not always the best ways to measure success in a race. For most people, including me, success in a race is more of an internal thing. I finished first in races where I did not achieve what I wanted to. I ‘won’ other races, by my internal standard, where my time or place was inconsequential.”
—Tom Sobal, considered the founder of  U.S. competitive snowshoeing (at least in Colorado)

In a Strava-nated world where data reigns king, mile splits are tracked by almost everyone, and just about every aspect of a run can be analyzed scientifically, some of us yearn to return to a simpler time. We are grateful for races with no entry fees or prize money or guaranteed marking. For races that don’t even have cell coverage on the course. For races that, although they cover only 30K, take much longer than a marathon. For races that require snowshoes even if there might not be enough snow because, as stated by the RD in a why-did-you-even-ask voice, “It’s a snowshoe race.” For races that, because they are within an hour of Boulder, Colorado, are guaranteed to have a strong field, even if it’s full with only 75 runners. For races, that is, like the Sourdough Snowshoe Race in Nederland, Colorado.

January 9, 2013, brought a classic Colorado day to Nederland and the Sourdough Snowshoe Race. Sun at the 9 a.m. start (if you’re not freezing on the line at 10,000 feet in the winter, it’s going to be a warm day) indicated enjoyable conditions for the fourth-year event. At the line, some of us actually reminisced about the legendary Tom Sobal, reflecting on the Turquoise Lake 20-Miler, the classic that started it all.
Where It All Began

Created in 1990, a few years after Bill Perkins invented running snowshoes and sold the model to Redfeather, that race was organized and ruled by Sobal. The event ran for 20 consecutive years, and it was a dreaded favorite of trail runners, ultrarunners, adventure racers, roadies and anyone else up for serious suffering. The race started at over 10,000 feet, at the Sugar Loafin’ Campground in Leadville, and the entry form warned you, in a nutshell, that the epic event took no prisoners and you had better be able to take care of yourself out there in the cold.

Indeed, the single aid station typically consisted of a jug of water—ice, that is—sitting in the snow along the trail. Sobal did do a good job of rounding up a snowmobile crew to rescue struggling athletes like the guy who decided to race in shorts on a particularly blizzard-y day one year.

The course included two crossings of Turquoise Lake, often consisting of a thin layer of ice above a foot of slush on top of the real lake ice. A handful of steps without sinking through that first layer felt great, because most steps involved plowing through the knee-high slush. Nothing like getting across the lake and then running 17 miles with soaked shoes encased in snow and ice. Even a decent day out there involved a strong dose of what my dad, Mark Macy, calls “good mental training.” He should know—he has has been snowshoeing since the beginning and won the 100-mile Iditashoe snowshoeing race in Alaska a few times in the early 1990s.

Sobal won the 20-miler 75 percent of the time, and only one other person won it more than once. Sobal’s 2:54 record time in 1998, when he was 40, may not look that good on the aforementioned smart-phone app, but you’d be hard pressed to find someone who has bettered Sobal’s time for that distance and altitude on snowshoes. Hal Koerner, who has finished 122 ultras and recently set an impressive FKT with Mike Wolfe on the John Muir Trail, recalls Sobal’s glory days: “Besides Matt Carpenter, there really was no more dominant figure in his sport in Colorado. I was always amazed by Tom’s ability to push so hard in the thin air, and how his monstrous quads levitated above the deep snow.”

Seven-time XTERRA USA National Champion Josiah Middaugh, who has taken the “guy to beat in snowshoe races” torch from Sobal, reflects on his only attempt—a win—at the 20-Miler.

“It was a surreal experience to race against the legend Sobal in this epic event. I remember looking back at about mile 16 to see a hard-charging Sobal—and his flowing, braided, red beard that hadn’t been trimmed since the ‘70s.”

Other long snowshoe races in the Rockies have been few. A race up and down Mount Elbert, just outside of Leadville, ran from 1994 to 1996. My dad thinks it was declared the “High Altitude Snowshoeing World Championship,” though he and his buddies may have just been agreeing to a remark someone made at the starting line. Dad’s racing stories generally grow over time, but this one needs no hyperbole as the 14,439-foot summit is tall enough. Sobal recalls around 15 miles of snowshoeing with over 6000 feet climbed, and his fastest time—yes, he won all three years—was 3:28.

North of the border, several ultra snowshoe races have come and gone. In 2007, Dave Mackey of Boulder, Colorado, took home one of the largest prizes ever for a running/snowshoeing race when he earned a $12,000 diamond by winning the 300-kilometer Rock and Ice Ultra in Canada’s Northwest Territory. The following year, I borrowed Dave’s kiddie sled in an attempt to bring home a rock for the woman I wanted to marry but was smoked by Greg McHale, who lived up there and actually knew what he was doing in those conditions. Come to think of it, some of Greg’s splits on the week-long, self-supported stage race might have challenged Sobal, but I guess we’ll never know.
The Future

So, where does ultra ’shoeing go from here?

Sobal is optimistic: “I think there are likely more people that would be interested in doing longer snowshoe races now than when I was into it. With the greater interest in more extreme-type sports, like ultras and trail running, it seems like there will be increased interest in longer snowshoeing as well.”

Kevin Lund, 53, who remembers snowshoeing in the Rockies as a young child and boasts an adventure resume including peak summits on three continents, surviving a hijacking in Africa and successfully recovering from a broken neck (the gravitation of mentally tough people to snowshoeing is no coincidence), began organizing the Sourdough partly because the Turquoise Lake 20-Miler ended. He envisions a Colorado series of 20-miler-ish snowshoe races each year in Nederland, Winter Park and Breckenridge.

Would the races be big and glitzy, with microphones, “Eye of the Tiger,” lots of compression sleeves and on-site Strava transmitters? Probably not. “I like the fact that this race is free,” says Lund. “Right now, the race is fun for all. The loop on the 30K is perfect. It runs through the trees, has downhills, sidehills, turns and hard climbs.”

My own experience at Sourdough was excellent. Strong competition generated a great workout and a close race. My legs burned on the climbs and thanked me on the cushioned descents. A constantly changing view of lodgepole forests, grassy meadows and steep drainages helped numb the pain.

Out there on the course, I reminisced. I thought of chasing Sobal as a teenager in the 20-miler, Off-Track Off-Beat (another Sobal race, in which snowshoers ran next to a track that had been set, plowing a new trail over the entire course), and other classics. I thought of my dad, out there behind me—literally and figuratively—in this and just about everything else I do, and about how snowshoeing and running together have provided a unique and solid foundation for our relationship.

I thought about a gorgeous, sunny winter day and the beauty of the Sourdough Trail in the Rocky Mountains. I thought about the fact that I love snowshoeing and think everyone should do it. I thought, most of all, about the race director, volunteers and athletes, who were all out there for fun, nature and camaraderie, with utter disregard for how their mile splits would look on social media. Sobal was right—winning this race had nothing to do with finishing first.

Though Vitargo S2/Hoka One One athlete and endurance coach Travis Macy is on Strava, it is notably absent during his dreams about a 20-Miler against Middaugh and Sobal in their primes. Find him on Twitter at @TravisMacy.

For information on the Sourdough Snowshoe Race, visit http://sourdoughsnowshoerac.wix.com/sourdough-snowshoe-race.