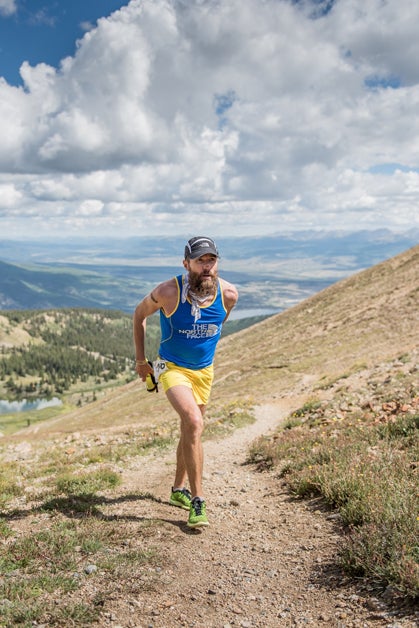 Krar in the high country during the Leadville 100. Photo by Matt Trappe

Last June, Rob Krar, then 36, ran his first 100-mile race at Western States, where he came in second.

This summer, the Flagstaff, Arizona pharmacist has run his second and third 100-milers, winning both.

When he runs his fourth next month, can he make it three consecutive wins?

Next, on September 13, he will take on the Run Rabbit Run 100 in Steamboat Springs.

“I wanted to challenge myself in a new way this year, and [the Western States/Leadville/Run Rabbit Run] triple seemed like a great opportunity to do that,” says Krar.

Such frequent racing marks a change for Krar, who in 2013 raced infrequently but focused highly on the few races he entered; this approach earned him victories over stacked elite fields at both the UROC 100k and The North Face 50 San Francisco. (One exception was the JFK 50 Mile, just two weeks before TNF, where Krar dropped out.)

“It’s an experiment, really,” he says. “Am I smart enough to recover sufficiently from each, sneak a little training in between and rest sufficiently to run strongly each time?”

“I’m certainly creating the greatest opportunity for myself to crash and burn,” he continues. “But it’s a calculated risk and exciting for me.”

Running three 100s in a summer is not unprecedented – participants in the Grand Slam of Ultrarunning run four in almost the same period – but winning so many competitive 100s so close together would put Krar in rare company. Ann Trason has also won both Western States and Leadville in the same summer, having done so in 1990, 1994 and 1998.

Complete results of the Leadville 100 can be found here.