Why has running up ski hills become so popular? 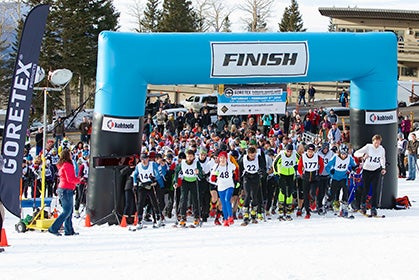 Rob Krar (#43) and his competition at start of the 2014 Agassiz Uphill. Photo courtesy of Rick Johnson.

A onetime cross-country and track athlete at Butler University with a 1:05 personal best half marathon and a 2:25 finish at the 2007 Boston Marathon, Rob Krar had a history of competition, to say the least. But chronic, repetitive injury forced him to have surgery in the winter of 2010, taking him out of the game. A year after the surgery, Krar was still recovering and had no intention of ever competing again.

At the 2009 TransRockies Run, a multi-day stage race in Colorado, Krar had met his future wife Christina. A versatile mountain athlete in her own right, she taught Krar to climb and the two went backpacking and fly fishing together. She also convinced him to try on skis with skins attached for uphill traction. These tools of ski mountaineering, an internationally competitive sport in which athletes skin up mountains and ski down as fast as possible, offered a low-impact winter training alternative to running. In 2011, after developing his skiing skills, Krar won the Kahtoola Agassiz Uphill, in his hometown of Flagstaff, Arizona.

The Agassiz Uphill belongs to a growing category of events called uphilling, or racing to the top of a snow-covered mountain slope and sometimes back down. The younger cousin of ski mountaineering, uphilling races allow participants to choose their means of ascent—snowshoes, track or telemark skis, heavy metal (touring skis or snowboards) or traction devices worn on running shoes—with the condition that they descend in the same manner they came up. Each type of gear typically has a separate results category.

Though uphilling has become especially popular in the last several years, with new events popping up in New England, Michigan and the Rockies, the sport traces its origins to climber and ski mountaineer Fritz Stammberger. In the early 1970s, Stammberger began running up the mountains surrounding Aspen, Colorado, with skis on his back for the trip back down. Seeing Stammberger make these steep charges, fellow Aspenites Scott Edmondson, Eric Kinsman and Arthur “Boots” Ferguson got competitively curious: What was the fastest human-powered mode of going uphill? The product was the first race of its kind, America’s Uphill in Aspen, now a memorial event to Stammberger and Edmondson.

“[Stammberger] raised the bar on athleticism in the mountains,” says Danny Giovale, founder of Kahtoola, a well-known maker of traction devices that sponsors the Agassiz Uphill and other races in the Rockies and New England.

For wild mountain purists, running up a groomed ski slope might seem to suck the allure out of mountain running, like holding cross country races on golf courses. But ski areas hosting uphilling events offer a convenient option for winter adventures. “[Uphill events] get you into terrain that is hard to get to on foot [in the winter],” says Rickey Gates, the record holder at America’s Uphill and the Vail Mountain Winter Uphill in Vail, Colorado. The relative safety and predictability of ski areas are also attractive to sponsors. “It is a controlled environment where any avalanche danger has been addressed,” says Giovale.

Krar, now 38 and a multi-time champion of the Agassiz Uphill, attributes a great deal of his recent success in trail running to skimo and uphilling. The low-impact, high-intensity activities allowed him to regain his strength without risking injury. Krar has since won the Western States 100, Run Rabbit Run 100 and the Leadville 100—and that was only this past summer.

“The winter of skimo really opened my eyes to its benefits,” says Krar. “It was really the catalyst to my trail and ultrarunning career … beginning the running season super fit with almost no impact and wear and tear on the body is hugely advantageous.”

Uphilling tends to be more relaxed and less competitive than skimo, and many uphilling races are charity or memorial events. But in the lifecycle of new sports, it is inevitable that high-level competition will increase. High-profile athletes like Krar, Gates and Kilian Jornet, a star ultrarunner and four-time International Ski Mountaineering World Cup winner, are drawing much more attention to uphilling. The anecdotal fitness evidence those runners provide has gotten more competitive athletes, like Sari Anderson, a champion multi-sport athlete, and Tom Goth, who finished 10th at the 2014 Speedgoat 50K, to mix up their winter training with these events.

With more competitive participants getting involved, some events are taking measures to make sure the relaxed culture of uphilling prevails. Summit for Life, another uphilling race in Aspen, has accommodated the increasing number of runners with two start times, one for recreational participants and the other for serious competitors. Most uphilling races attract mainly local support from the community, and the laid-back, friendly competition keeps people coming back.

“We’re looking more at the fundraising and the fun factor” than the competitive aspect, says Giovale of the Agassiz Uphill. “We have the ‘Most Fun’ award, we have costumes, we have a big party afterward.” So far, he adds, elite athletes have bought in to the fun atmosphere. To Krar, more participants means more people to enjoy the mountain with. Gates simply says, “It’s really frickin’ fun.”

For some runners, of course, powering up a snowy, glute-scorching vertical K is the fun; they may wonder what tools make them fastest up the mountain. For the up-and-down races, it’s doubtful anything can compete with the a ski touring setup to float over the powder on the way up and fly down the mountain to the finish. In events that only head uphill, though, the best choice is less certain, and ultimately comes down to athleticism. Gates, for instance, has only raced in running shoes, but boasts an impressive uphilling resume.

“It’s kind of a joke when people ask us, ‘What is the fastest way to do your race?” Giovale says. “We say, ‘The fastest way [to do] our race is whatever Rob Krar does.’”

The Science Of Downhill Running