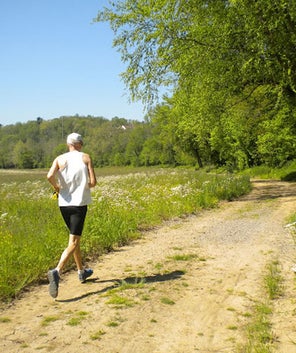 Western North Carolina boasts a backdrop of verdant forests and an endless mogul of the Blue Ridge Mountains. Nestled in all that splendor rests George Vanderbilt’s Biltmore Estate, site of the inaugural Asheville Marathon at Biltmore on March 3, 2013.

Runners will start by the mansion—a veritable Hogwarts—and tour the grounds where the views of the property and surrounding landscape seem straight out of France.

“Everything is lush and manicured,” says race director Daphne Kirkwood. “Going onto the estate is an escape from modern-day life. The vastness of the land, the gardens, the house…it’s like traveling back in time. Being part of the marathon is being part of Biltmore history.”

Far from the Outer Banks, far from Tobacco Road, Asheville is a regional hamlet that marks the terminus to the Blue Ridge Parkway in the mountains of western North Carolina. Wide pan shots of the property elicit a Tour de France-backdrop of tree-cloaked mountains and fields of grapevines flush with baby wine.

It’s called the Biltmore House—but calling this mansion a house is like calling Scott Jurek a “weekend warrior”. The mansion, a looming, domineering gothic chateau, was opened to friends and family of George Vanderbilt on Christmas Eve 1895. Vanderbilt envisioned it as a getaway, a remote place where he could live lavishly, but have the acreage to hike. The entire property spans 125,000 acres and marks one of America’s first managed forests.

“To see the race is going to happen makes me giddy,” says Kirkwood. “It’s a dream come true.”

Since the Biltmore Estate is private property, runners won’t be able to scout out the course before race day. Beginning with eight paved-path and road miles that snake through the property, the course becomes trail and carriage roads for the remainder of the race. It braids in and around the estate, up and down hills, by gardens and greenhouses, by farm animals and underneath circling raptors.

“There’s a new bridge connecting the east and west sides,” Kirkwood says. “The west side is where the vineyards are. It has a European feel to it. You get hillside views of old barns and houses. Run right through the vineyards, just beautiful, a view of the house never been seen before.”

The Asheville-area running community has been responding in kind. Kirkwood says elite runners are drawn to the challenge of running on a new course and the $6500 in total prize money.

Asheville native and 2006 Ultrarunner of the Year Anne Lundblad, 46, is thrilled to have a marathon in her hometown. She recently was part of the gold medal-winning U.S. 24-Hour Team that competed in Poland in September. For the Asheville Marathon, she plans to gear up with speed work.

“The course will be rolling,” says Lundblad. “I imagine we’ll be running by the French Broad River and beautiful gardens. I’ve seen deer and lots of birds, but it’s not a wild mountain run. It’s definitely well manicured.”

With the scenery, the 1300-entry cap, and road traffic largely prohibited from the property, there is a charming hybrid aspect to the race—the energy of a road marathon matched with the peacefulness of a trail run.

Race entry includes all-day access to the Biltmore House and grounds. The inaugural Asheville Marathon is limited to 1,300 runners. Participants must complete the race within 6 ½ hours. Prize purse offered totaling $6500. A portion of the race proceeds benefit the Leukemia & Lymphoma Society and the Mission Cancer Center.

The Biltmore Estate prides itself on its upkeep and knowledgeable staff. Take the time and visit the mansion and get a sense of the life George Vanderbilt lived. You can be the judge as to whether you’d like it or not.

Getting There
Shuttle transportation will be provided to and from the race when you stay at the Race Headquarters Double Tree by Hilton. Directions: http://ashevillemarathon.com/travel/directions/

Other Trails to Hit Up

Bent Creek Trail at the North Carolina Arboretum
Over ten miles of hiking and biking trails sought out by tourists and locals alike.

The Appalachian Trail
Just 20 miles north of Asheville, runners can hit up the AT for as long or as short as you’d like.