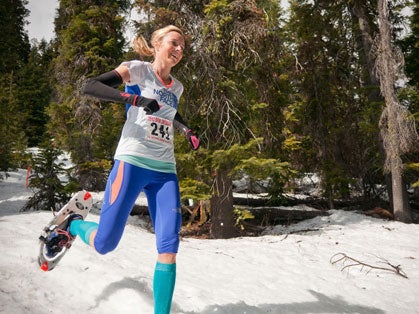 As if trail races aren’t gritty enough already, the United States Snowshoe Association (USSSA) National Championship races last weekend in Bend, Oregon, took the challenge of running mountainous trails to another level—adding deep snow and a little more bushwhacking than some racers might have anticipated.

The course, offering both 5K and 10K distances, topped out around 5700 feet. With steep climbs and descents through thick snow, there was little opportunity for racers to enjoy the Oregon scenery, lest they misstep and lose time post-holing off the beaten path.

A race recap from Redfeather Snowshoes called it “a race of attrition, as racer after racer slipped” and said the course required “a combination of total focus and a variety of gymnastic moves to clear fallen trees, bushes and the occasional tree limb jutting out over the newly created path.”

Josiah Middaugh, of Vail, Colorado, took the 10K win in a time of 47:08, with a lead of several minutes over second-place finisher Eric Hartmark, of Duluth, Minnesota. A minute later, first-time snowshoer Mario Mendoza (see ‘All or Nothing: Trail-running upstart Mario Mendoza pushes to the top’) of Bend, Oregon, crossed the finish line. 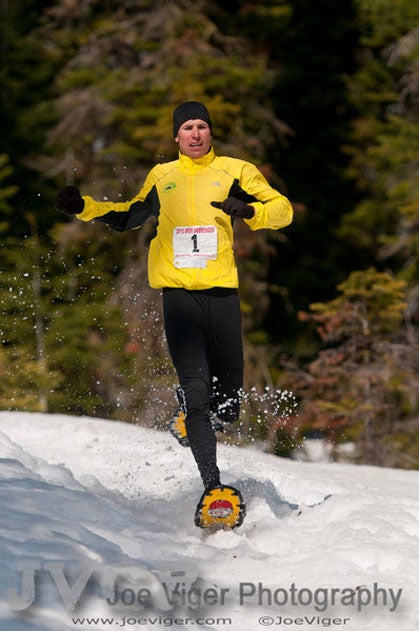 Josiah Middaugh on his way to winning the 10K Championship. Photo by Joe Viger

In the women’s 10K race, fellow Bend local Stephanie Howe took first in 1:00:14. Brandy Erholtz of Evergreen, Colorado, and Carolyn Stocker, of Westfield, Massachusetts, battled until the very end, with Erholtz edging out Stocker by five seconds for second place.

Says 5K finisher Paul Schmitt of Stoddard, Wisconsin, “The altitude was really getting to me at the top. I was gasping for air up there, but I pushed through it.”

Full results will be available at snowshoeracing.com.