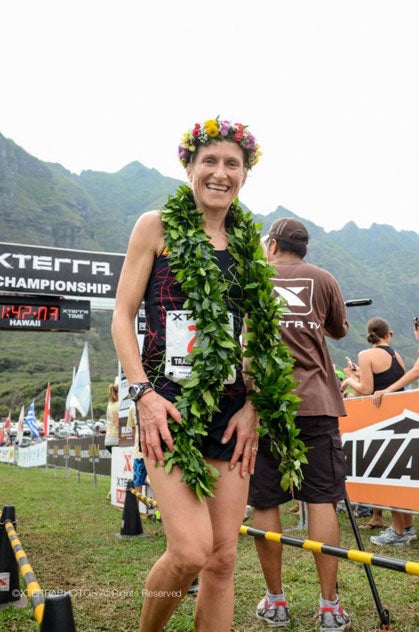 The 2012 XTERRA Trail Run World Championships swept through the record books this year, with historic performances in both the men’s and women’s races. For the first time in the race’s five-year history, Oregon’s Max King, who had held the title since the race’s inauguration, opted out. This left the field wide open, and inspired fierce competition.

Joe Gray of Renton, Washington, led the majority of the race, despite running off course twice—Gray later described the course as both physically and logistically challenging. Ben Bruce of Flagstaff, Arizona, who had occasionally seen Gray ahead of him throughout the race, used those glimpses to motivate his chase. In the final section of the course, with the finish line in sight, Bruce made his move. Of the effort he said, “It was one of those things. You keep trying to press on and never give up in a race.” That determination was evidenced by the neck-in-neck competition that resulted in the first-ever official tie for first place. Even a finish-line photo and video replay did not produce one distinguishable winner. Bruce and Gray both received $1500 for the co-victory, along with a recorded time of 1:21:58. The third place finisher Christian Wills crossed the line within minutes of that historic tie, clocking 1:25:54.

The women’s race was similarly competitive, and similarly affected by the logistical challenges of the course. Polina Babkina, a Russian student at Hawaii Pacific University, led for over half the race, but took a wrong turn, allowing Canadian Lucy Smith to overtake her. Smith, 45, with a time of 1:41:39, became the oldest runner ever to win the XTERRA Trail Run World Championship. After coming in second at the 2011 race, she focused on hill running to train for this year’s race. “Training for all the hills is the hardest part,” she said in an XTERRA press release, “and I feel like I was better prepared for it.” Amber Moran from Asheville, North Carolina took second place, only two minutes behind Smith. Babkina came in third with a time of 1:45:34.