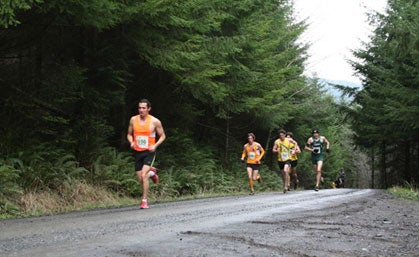 Over the weekend, 250 runners flocked to Olympia, Washington, for the third race in this year’s La Sportiva Mountain Cup, the Hillbilly Half Marathon—a challenging climb up Rock Candy Mountain in the Capitol State Forest and back down again. (There is also a Hillbilly Mountain Marathon companion event, though only the Half participates in the Mountain Cup.) On the race website, race directors Rachael Jamison and Craig Dickson warn that the course is “hard as hell … designed to give you a run for your money.” Says one runner in the local training group, “Don’t even think about a PR here.”

With cloudy, classic Evergreen State conditions keeping runners cool, the Hillbilly Half saw new course records in both the men’s and women’s races this year. Jamison attributes this to a milder winter this year, with only a few puddles and mud for the racers to navigate—as opposed to the deep snow and ice that graced last year’s race.

A stacked field came from all over the country; top contenders included Northwest locals alongside elite East Coast runners and several strong competitors from the Rocky Mountain region.

Megan Kimmel, 32, of Silverton, Colorado, continued her dominating streak in the Mountain Cup with a commanding win in the women’s race (7th overall) in 1:37:33—a 15-minute lead on second-place finisher Teresa Lee, 33, of Washougal, Washington. Says Kimmel, “The singletrack was beautiful in the forests—green, lush, a great contrast to our cold, snowy Colorado winter.” Third place Trish Havey, 30, of Mountlake Terrace, Washington, crossed the finish line in just under two hours.

Kimmel also captured the win in the previous weekend’s Mountain Cup race, the Chilly Cheeks 7-miler in Pennsylvania, as well as second in the Moab Red Hot 33K the weekend before that. “My body feels it,” she says. “Traveling takes its toll, especially hopping onto an airplane that same day or the next. It’s hard to keep miles up between races.”

On the men’s side, Jared Scott, 30, of Dolores, Colorado, led the pack on the initial climb. Close on his heels, Matt Byrne, 37, of Scranton, Pennsylvania, and Jordan McDougal, 25, of Warrenton, Virginia, caught him on the descent after the turnaround. Says McDougal, “I had to stop at the top to throw up, and then Matt was gone.” Scott, who lost his lead on the descent, agrees: “Matt is a downhill runner, and you can’t mess with him once he gets moving.”

The race remained close until the very end, with Byrne sprinting across the finish line in 1:20:33, just seconds ahead of McDougal, and breaking his own course record from 2012 by nearly six minutes. “It was a very fun run up the boggy mountain, with all of us trading the lead probably six times before the top,” says Byrne. “I was very happy to get a win against a solid group of guys.” Scott crossed in third in 1:23:41, several minutes ahead of the next finishers.

Outside of the elite field, another top participant of the day was Scott Sipp, who was awarded the La Sportiva Standout Award, designed to recognize an athlete who displays some kind of notable achievement. Without even being asked, Sipp and his father had brought chainsaws up to the mountain before the race to clear the course of blowdowns. Says Jamsion, “He just went above and beyond and demonstrated an attribute that we try to foster in our running community: selfless team spirit.”

For complete race results from the Hillbilly Half, visit http://www.guerillarunning.com/files/64682185.pdf