You Will Run Your Best Race When You Run Your Pace: Valuable Lessons learned in Washington … 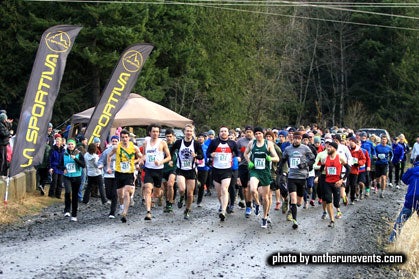 photo by On the Run Events

Travel—it’s one of the sweetest perks about participating in a nation-wide race series. So far this early season, I’ve experienced the red slickrock slabs of Moab, Utah, tripped over the rocky and rooted trails of Reading, Pennsylvania, and finally, discovered the obstacles in Olympia, Washington.

I arrived to cloudy skies with a light drizzle when my plane landed in Seattle, Washington. With my face glued to the airplane window on the descent, I hoped to score a glimpse of impressive Mount Rainer. No such luck.

I was driving my rental car south towards Olympia 30 minutes later, cruising at a mach speed of 20 miles-per-hour, eyes peeled for my homestay. Bingo! I would be stationed in downtown Olympia with a Brooks-sponsored road-running stud, across from a park where they filmed Prefontaine. Hello motivation!
Race day weather included overcast skies (again) and strong 20-mile-per-hour winds, making the 42-degree temp feel 10 degrees colder. I knew I would warm up after the first mile or so, and that the wind would decrease substantially within the trees. Conditions would be perfect.

After climbing the first 1.5 miles up a cinder fire road, we turned onto Rock Candy Trail, which at first glance was a pleasant singletrack. The tall pines created an amazing canopy and the bright green flora popped up in places where the light could shine through.

Getting lost in the forest’s beauty, I stepped right into a four-inch deep mud puddle.  … Couldn’t I have at least made it two miles before soaking my feet? I focused more intently on my foot placement and began to notice very frequent mud and puddles on the trail. The farther I ran, the more gunk I encountered.

So, to keep things fun and relaxed, I bounded off of rocks and logs to avoid the deep mud and murky water. I was feeling great and having the time of my life.

Through all my goofing, I was slowly creeping up on the lead female, Christina Bauer (second place at Moab’s Red Hot 33K, and my fellow LaSportiva Mountain Cup competitor). I was confident that I could catch her, but was in no hurry to do so. It was a completely foreign though for my miler’s mind, but after bonking (hard) at the Red Hot 33K, my number one race goal, was to run my race at my pace.

I must have splashed through a dozen knee-deep snow melt puddles (no way to avoid them) before I was on Bauer’s heels. I stuck behind her enjoying a comfortable pace and was debating on when I should make a move. Just after mile four, she stopped to tie her shoe, and I took off in hopes of creating a serious separation on the windy trail. Since we were friends and both experiencing challenges on the trail, I made sure to say “good work” as I passed Bauer.

Almost immediately my mental state changed from enjoying the chase to fear of being hunted down. My pace quickened. It was an out and back course, so I could gauge my lead after the turnaround. And, I wasn’t as far ahead as I had hoped. Luckily, it was mostly downhill … my favorite direction to run!

With one mile to go, I still felt strong enough to run another five. Then, with 200 meters to go, I still felt cloud-high. The course rounded a corner and I gave a quick look to see if second place was going to engage in a full sprint-battle to the finish. No one was there. I kept my pace and headed into the shoot as first female.

No doubt running relaxed and having fun helped me win the race. By finding a positive mental state, I felt like I could conquer anything that was put in my path. It is truly amazing what the mind can do. 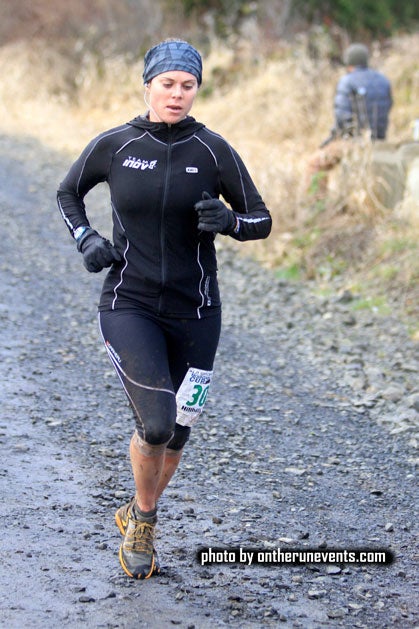 photo by On the Run Events
The author striding to the finish.

After a successful day, I decided to indulge in some celebratory drinks at Fish Tails Brewery with fellow racers Jared Scott, 2011 LaSportiva Mountain Cup winner and World Mountain Championship competitor, Christina Bauer, 2011 GORETEX Transrockies podium finisher and Robert Krar, Flagstaff resident and GORETEX Transrockies winner. We talked and laughed and drank good beer … how the end of a good trail race should be.