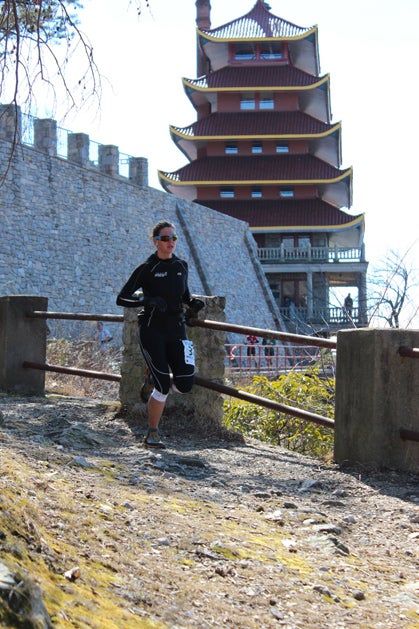 Ron Horn of Pretzel City Sports in Reading, Pennsylvania, knows how to keep things interesting.  After reading a few lines from his Ugly Mudder 7.25-Mile race application, I was sold on partaking in the adventure:

It is not Boston nor the Olympics or even a line item on a bucket list of someone who desperately needs to get a life. It is, instead, a wonderful regional trail event thru whatever winter conditions cover the mountain overlooking the one-time Factory Outlet Capital of the World. It is an assortment of rustic trails covered by dirt & debris, rocks & roots, deer pellets & discarded undergarments, somewhat unique aid stations & fare, with constant undulation throughout, but nothing that requires a Sherpa. —Ron Horn

The German-settled city is most recognized for the Reading Railroad Company, a popular property in the game of Monopoly. Situated between Mount Penn to the east, Neversink Mountain to the south and the Schuylkill River to the west, it should also be known for its beautiful landscape. Even though the metropolis of Philadelphia is only 65 miles away, Reading harbors peacefulness and easy access to escape into the wild.

Packet pick-up for the Ugly Mudder was held at the Liederkranz German Singing and Sports Club, which was also the site for the post-race party. There, I was instantly transported to a bar in Germany—pictures of people dressed in traditional German garb covered the walls, and the aroma of the previous evening’s brew hung heavy in the air. … Too bad it was only 10 a.m., and I had 7.25 miles to run!

Nearing gun time, I headed to the start. In a sea of striding athletes, I picked out long-time friend and U.S. Mountain Running Team athlete Matt Bryne. I also noticed two more big guns in the mountain-running world, Jason Bryant and Ryan Woods. … I was glad I didn’t have to worry about racing the men. With that line-up, I knew it would be one hell of a battle for first.

Horn provided course details, which included repeated instructions on simply following the arrows. Then, we were off.

The first climb appeared 400 meters into the race as the trail narrowed and we scrambled up rocky steps on all fours. We continued along the rocky, root-covered ascent (traditional Northeast terrain) for another 1.5 miles.

What goes up must come down. Near mile two I was enjoying a full-throttle descent, until I collided with a steep, icy water gutter covered in leaves. All the voices in my head screamed: “BREAKS!” I transitioned to a speedy version of the crab-crawl, uncovering all sorts of ankle busters. Dialing it back turned out to be a smart move.

The next climb topped out on Mount Penn’s summit. Not only does the summit provide an excellent view of the Pennsylvania countryside, but it also presents a bit of Asian culture. Rising high above the neighboring treetops, stands a five-story traditional Japanese pagoda with bright red tiles and yellow trim. In 1908, landowner William Abbott Witman hired a local builder to construct a pagoda that he had seen on a Philippine post card—today, it’s a tourist attraction. As I ran past the base, all I could picture was Karate Kid’s Ralph Macchio accompanied by Joe Esposito’s You’re the Best, in full stereo.

With two miles to go, I approached the final aid station, expecting the usual water, Gatorade, maybe some pretzels. A volunteer announced the hydration choices. I was only half listening, but managed to catch, “Beer!” As tempting as it was, I decided to keep going in hopes of chasing down first place. Little did I know that Maria Dalzot (U.S. Mountain Running Junior Team stud athlete) was about two minutes ahead, and still opening the distance between us.

So, I kept chasing and finished second (maybe I should have grabbed the beer). I was pleased to have completed Ron Horn’s “obstacle” course, and to have escaped with only minor scrapes and bruises. I hadn’t practiced that much high stepping and log hurdling since my college steeplechase years.

After crossing the line and taking a few moments to gather my breath, my next challenge was finding my meal ticket so that I could enjoy some post-race eggs, sausage and pancakes … chased by a beer.