On Saturday, over 300 runners will embark on the Western States 100 Mile Endurance Run, whose legendary course traverses peak and sweltering canyon alike as it meanders from Squaw Valley Ski Resort to the Auburn High School track in northern California. It’s a race that produces high-end competition and human interest alike, as runners strive to meet goals that range from course records to beating the cutoff.

Here are five things that should make this year’s race interesting:

If there is an ultrarunning equivalent of a Mayweather-Pacquiao title fight, it might pit Stephanie Howe against Magdalena Lewy Boulet.

Howe, 31, of Bend, Oregon, is the defending women’s champion at Western States and in April won the ultra-competitive Lake Sonoma 50 Mile. She has range, demonstrated by wins at both the runnable Western States 100 and the more technical, mountainous Speedgoat 50K. When she’s healthy, she is nearly unbeatable.

You could say the same, though, of Lewy Boulet, 41, of Oakland, California. The 2008 Olympic marathoner hasn’t lost an ultra since September 2014, besting stacked fields at The North Face (TNF) 50 Mile San Francisco, Sean O’Brien 50 Mile and Chuckanut 50K along the way.

Boulet prevailed the last time she went head-to-head with Howe, at TNF in December. (Howe was third.) But Western States will be Boulet’s first try at 100 miles, a distance where anything can happen.

Kimball might not win Western States in 2015—though with three wins, a second-place finish in 2013 and a fifth-place finish in 2014, it’s not out of the question—but she could become the second woman ever to have 10 top-10 finishes, all under the vaunted 24-hour mark, according to John Trent, the President of the Board of Trustees of the Western States 100-Mile Endurance Run. (The other is Ann Trason, whose dominance of Western States from 1989 to 2003 almost necessitates a separate category for everyone else. She won every year but 1999 and placed as high as second overall in 1995.) As ultrarunning has become more and more competitive, Kimball has exhibited a rare consistency and strength spanning two eras.

Not to be outdone, Gunhild Swanson, 70, of Spokane Valley, Washington, could become the first woman 70 or older to finish Western States, Trent says. Swanson has run the race twice before, finishing as fast as 25:40:28 in 2005—when she was 60. 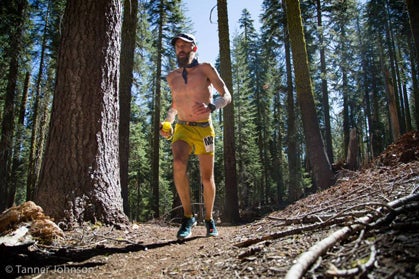 3. Will Krar defend his title?

Speaking of runners who seem unbeatable, defending men’s champ Rob Krar, 38, of Flagstaff, Arizona, was on fire last summer. He won Western States in commanding fashion, clocking the second-fastest time ever on the course, then followed that up with wins at the competitive Leadville Trail and Run Rabbit Run 100-milers in August and September, respectively.

That December, though, the fatigue of three 100-milers in roughly three months’ time became evident when Krar pushed through a rough day to finish 12th at TNF 50 San Francisco, a race he’d won the year before. If there is any lingering fatigue, there are some very fast runners who could claim their first Western States title in 2015. But Krar is a recovery pro, and spent much of the winter on skis. If he’s feeling good—and he says he is—we wouldn’t bet against him.

It’s not news that California is in the throes of a severe drought, and you may have read that the state’s snowpack is currently zero percent of normal. That could lead to two major concerns for race organizers. The first is fire risk; the race course has been altered before due to fire, and was canceled altogether in 2008 due to smoke. The second is water levels; if streams dry up, runners will have fewer opportunities to fill up their handhelds.

But Trent says neither is a concern at the moment. “There is no snow on the course at all, but in my estimation, it is not a tinderbox at this point,” says Trent, who ran the first 30 miles of the course the day before I spoke with him. “In the Granite Chief Wilderness [into which runners descend after the first few miles of climbing], the streams are still running, which I didn’t expect. They’re just not running as high as usual.”

He added that the lower half of the course, typically a dustbowl, could be worse than usual. “It’s drier, so there could be a lot more dust accumulation,” he says.

Trent says that, according to long-term forecasts, temperatures on the course could hit the 90s during the race. He also says that’s pretty normal.

The issue, he explains, is that Northern California’s weather has been unseasonably cool so far this year, leaving runners who live and train near the course little chance to acclimate to the sweltering conditions they’ll face on race day. As a result, he says, runners will need to be careful.

“They’ll have to hydrate more than normal, and pay really close attention,” Trent says. “But we’ve also found that people are becoming more knowledgeable about how to take care of themselves as ultrarunning becomes more and more popular. Two years ago was one of the hottest years on record, but it was also one of the highest finishing percentages, near 80 percent.”