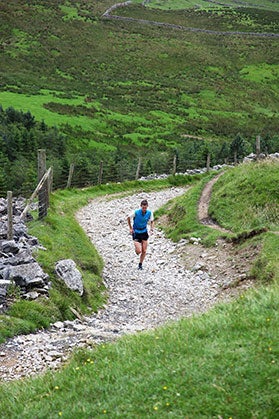 When people think of England, it’s often London and the “beautiful south” that spring to mind. In truth, that manicured and decorated southern corner of the country is little more than its fine trimming. To get to the guts of England, head for the green and grey, craggy landscapes of the northern counties, of which Yorkshire is the biggest. Mountains you find in Yorkshire—but, here, it’s also used to describe the area’s abundant high grazing pastures. In some form or another, fell running has existed in Britain since before the Battle  of Hastings in 1066. Its hard-cut traditions and popularity lie firmly rooted in the fells.

In British terms, Yorkshire is a huge expanse. Had it been its own country, it would have featured well inside the top 10 in the London Olympics medal table, which offers some insight into the sporting heritage and pride of this great “shire.”

Barren moorland and mountains, known as dales and fells, compose a huge part of West Yorkshire. The word “fell” originated from Scandinavia, where it referred to the kind of windswept between West Yorkshire and its neighbor, the Lake District. 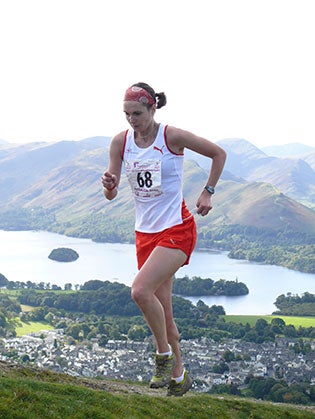 To give a feel for Three Peaks,  we spoke with Mary Wilkinson,  a leading British fell runner, who won the race in 2007. She is a “local lass” who lives in the Dales.

What is so special about  the race for you?

I live just down the road from the Three Peaks. Every time I look up the valley toward Ingleborough, I get a tingle of excitement and satisfaction about having run the race. Having done so many training runs over the peaks, to win the big event over them was very special.

Which parts of the course require the most thought and preparation?

The most technical part of the course is the descent from Whernside, which is the steepest and rockiest. it is important to plan your way down here. I mentally break the race into sections: Pen-y-ghent, across to Ribblehead, up and over Whernside, and then across and up ingleborough and down to the finish.

If I were to run it again,  I would really focus on two sections—the long run between Pen-y-ghent and Ribblehead, where you can make up a lot  of time, and the long section off the top of Ingleborough to the finish, which is all downhill. You can gain a lot of time by knowing the best lines to avoid the limestone paving, which is harsh and potentially dangerous when you’re tired.

What footwear do you advise for the race?

It’s really dependent on the weather, although the best advice is to wear whatever you are most comfortable in. I actually ran it in road-racing flats, as it was quite dry. But most people prefer a bit of grip and, because of the length of the race, some support would be wise.

> Weather April is often chilly, rainy and windy. It can also be sunny, but not generally warm.

> Getting There The race starts in the  tiny village of Horton-in-Ribblesdale, four hours from London, two hours from Manchester International Airport and just a few miles north of the old market town of Settle. Settle makes a good home base for racers, with plenty of facilities, a rail station and local buses to Horton. Settle is also the starting point for the Settle-Carlisle rail line, one of the most scenic rail routes in Europe, and has old steam tenders running on some days. Check out www.settle- carlisle.co.uk.

> Where to Stay Options range from camp- sites to bunkhouses, and great traditional bed and breakfasts. Visit www.york- shiredales.org.uk.

> Eat, Drink and Be Merry Yorkshire is famous for its hospitality, and you’ll find no shortage of pubs, inns and restaurants in Settle and other towns. Yorkshire bitter beers are a must try. There is also a small Three Peaks Café in Horton-in-Ribblesdale.

> Other Trails in the Area The Dales are blessed with an amazing and well-marked trail network. Get hold of an Ordnance Survey 1.25.000 Adventure Series map (available in local shops) and away you go. Any marked trail with footpath, permissive or bridleway status (99 percent of trails) is good to go.

Certain sections of the race route are only granted access on race day, but alternative local training routes are offered on the race website.