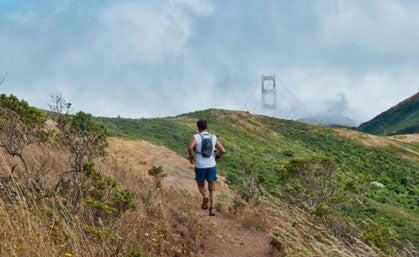 The BayTrailrunners Coastal Marin 50K was no official race, rather a social gathering of enthusiastic runners who concocted an epic journey on a wildly scenic linkup, including the Bolinas Ridge, Coastal, Matt Davis, Dipsea and Miwok trails. For most of the 13 participants, it would be the longest run of their lives.

Nervous chatter, introductions and apprehension filled the 15-passenger van we had christened “The Mothership,” as we set out for the far reaches of northern Marin County, California, and the start of our adventure. During the 45-minute drive, chatter focused on hydration options, running shoes and fuel when suddenly someone shouted: “Wow, that’s an amazing tattoo!”

I turned to see Peter showing off his tatts. One was a profile of Lady Gaga. But the other was none other than the signature of Dean Karnazes. “I got him to sign my shoulder with magic marker at a race one day,” Peter said, “and then I decided it would make a great tat.” Meanwhile, a couple of the crew snapped pics of Peter’s now-famous left shoulder.

A trail alongside Sir Francis Drake Boulevard in the small town of Olema is the gateway to the Bolinas Ridge, the San Andreas Fault rift zone and the beginning of our 50K. Famous in its own right, Olema was the epicenter of the destructive 1906 San Francisco earthquake, and the massive fault rifts are visible along the trail.

After piling out of the van, everybody gathered around, and my friend Ben and I gave an overview of the itinerary. Ben is in his early 30s and runs the Marin trails often. Today he would be out in front of the pack on his mountain bike setting out the red flags to mark the course.

Then, we were off. As we climbed, the Bolinas Ridge trail offered open, grassy meadows sprinkled with grazing cattle, low-flying turkey vultures against blue skies and distant views of Tomales Bay and the big billowy fog that normally hides Point Reyes. Everyone soon found their pace and ran with new and old friends or moved ahead on their own. 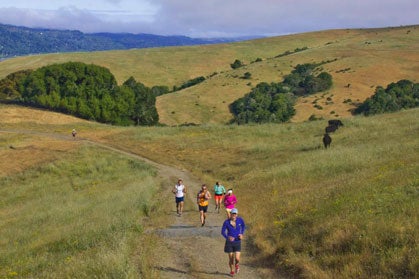 BayTrailrunners share the land with a herd of curious cows. Photo by Mary Bernsen

I ran with Chris and Hector. Hector, a college professor, had introduced Chris, an engineer, to trail running years ago, and the two had run together at events all over the world.

Soon we were sharing the trail with a dozen brown cows, some lying in the middle of it, indifferent.

At the 11-mile mark along Bolinas Fairfax Road we made our first aid stop at the Mothership. Shady and drippy redwoods kept us cool as we entered the start of Coastal Trail. Technical, forested singletrack paralleled the roadside and soon opened up to expansive views of Mount Tamalpais, the cold Pacific, Bolinas Lagoon and a sandy-white Stinson Beach. Long stretches of rolling hills were covered in sunlight, tall yellow grass and pesky stinging nettles. The off-camber hillside required running with caution.

The Coastal Trail turned into Matt Davis Trail, which took us across Panoramic Highway, into Pantoll Ranger Station, and our second meeting with the Mothership, at the 18-mile mark.

“How’s everyone doing?” I asked. “Anybody cramping up?”

“Yes, I’m having trouble with a hip flexor,” piped up Charles. “I’m going to call it a day.” His girlfriend, Chelsea, however, decided to carry on while Charles would provide good company for my brother, Eric, who was driving the van.

Picking up Old Mine Trail and moving on toward Muir Woods and the Marin Headlands we soon hooked up with the famous Dipsea Trail and climbed to the top of Cardiac Hill. We took a few moments to savor the view and have a peek at “Sam’s Fountain of Youth,” the new water fountain being built in honor of Sam Hirabayashi, a celebrated Marin County runner who took up the sport at the age of 70 and inspired a generation of older athletes.

At this point, I ran along with Jacob, who, since January of 2012, had lost almost 100 pounds through diet and running. In the last month alone, he had run about 140 miles on a schedule of three to five runs a week.

As we ran along the fringe of Muir Woods we weaved in and out of the Dipsea Trail and Deer Park Fire Road. Craggy and steep, technical terrain slowed our pace, before we headed toward the Muir Woods Road crossing and entered the Miwok Trail. 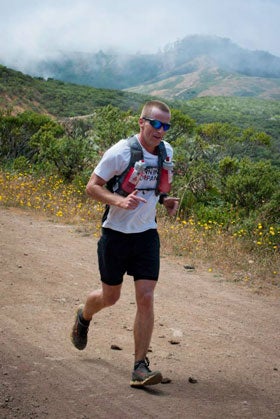 Here I caught up with the lead runners, Keli, Jerome and Marty. The Miwok Trail slapped us with a steady climb, and, at the top, fog and strong winds cooled us quickly. Mount Tamalpais came into full view and, to the east, we glimpsed Mill and Tamalpais valleys and Richardson Bay. Our next descent brought us into Tennessee Valley, and marked a marathon distance. We welcomed our meeting with the Mothership, knowing our next climb of the Marincello Trail would be punishing.

Chelsea decided to call it a day, as the run thus far would constitute her first “marathon.” The next two miles saw a remarkable spread between runners, as we all churned out our individual run-walk pace up the relentless Marincello Trail. Keli and Dani led the pack. Keli said he had a “love-hate relationship” with the hill, but Dani, slender and fit, never seemed to tire. She began running after college but only started training for a full marathon in February and had raced strong in a couple of shorter races. Asked why she had joined our group adventure, she replied, “I wanted a fun run with no competition. I wanted to be able to just kick back and not worry about pace or what place I was in.”

As the Marincello Trail turned into Bobcat Trail we caught sweeping views of Gerbode Valley and Rodeo Beach. Then picking up Alta and Morning Glory Trail, we once again were faced with another sudden climate change as we cut through a windy and thick patch of eucalyptus trees.

To our left we were able to make out Tiburon, Sausalito and a small part of the San Francisco Bay. Out of the trees and to our right was the entrance to the SCA Trail, a well-worn favorite with the local path pounders, with postcard views of San Francisco, the Golden Gate Bridge, Alcatraz and Angel Island. 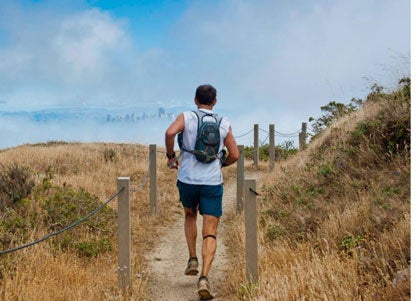 The author, running along the home stretch. Photo by Mary Bernsen

At the bottom of SCA Trail and the crossing at Conzelmen Road we reached the stairwells that led us up to the span of the Golden Gate Bridge and the final 2.7 miles of the run. Crowds were there to urge us on … well, just kidding, but the Golden Gate is always packed with sightseers and it was to fun to think they were there to cheer for us. We triumphantly crossed one of the wonders of the modern world and reached our final destination!

At the finish, we were greeted with smiles and hugs from wives, girlfriends, husbands, offering welcome food and beer. Slowly people drifted off, until it was just me sitting alone, staring off at the Marin Headlands and the Golden Gate, musing about the next time I might be able to host this run. 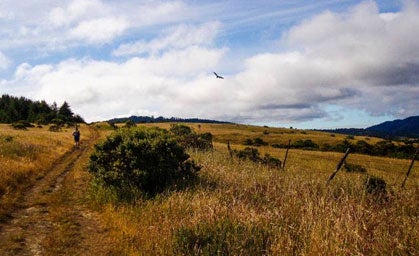