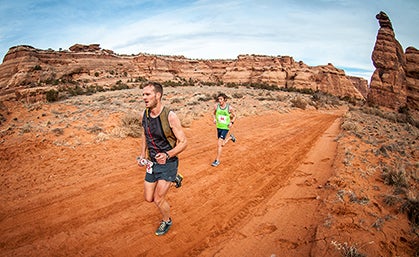 Justin Ricks on his way to smashing the course record at the 2014 Moab’s Red Hot 33K. Photo by Chris Hunter.

Early-season trail racing in the mountains can be a rough go. For some athletes, too much skiing and not enough running through the winter can lend itself to rusty racing muscles come February. The Moab’s Red Hot 33K, which kicks off the 2014 La Sportiva Mountain Cup, offers many mountain runners a welcome opportunity each February to thaw out their legs, soak up some desert rays and get their racing season started.

And, the scenery—fiery red trails of sand and slickrock, framed by the dramatic, snow-capped La Sal Mountains—isn’t too shabby either. 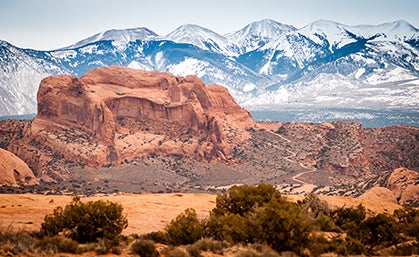 In past years, the primarily-slickrock course has seen significant levels of snow and ice—but not this year. An unseasonably warm, albeit overcast, Saturday last weekend in Moab, Utah, set the stage for a number of competitors to run strong races.

After spending the previous days hauling around water and race supplies, setting the course and managing only a few hours’ sleep, Moab’s Red Hot co-race-director Justin Ricks, 34, of Colorado Springs, broke his own 2013 course record by just over a minute. He finished in 2:07:54, nearly a minute ahead of second-place finisher Jordan McDougal, 26, of Linden, Virginia. Jared Scott, 31, of Dolores, Colorado, cruised in shortly after for third in 2:12:31. 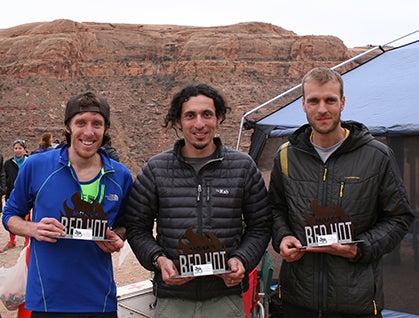 On the women’s front, Mountain Cup regular Megan Kimmel, 33, of Silverton, Colorado, led from beginning to end. She lopped nearly 12 minutes off her 2013 time, taking the win with ease in 2:30:48. Maria Dalzot, 25, of Bellingham, Washington (author of our popular Ask the Dietitian column) took second place in 2:35:16, with Brandy Erholtz, 36, of Evergreen, Colorado, just behind her. All three women broke the previous course record, Anna Pichrtova’s time of 2:37:02, which had stood since 2008. 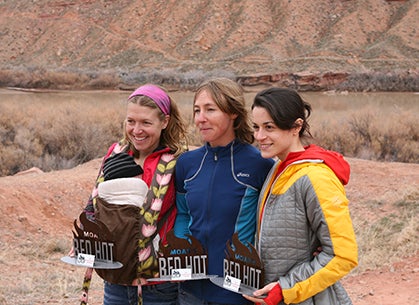 (Full results can be viewed here.)

For some, the event was a joyful re-entry into the trail-running and racing circuit after significant time off. For Geoff Roes, 37, of Boulder, Colorado, it was his first (non-snowy) trail race in over two years, due to injury. According to his blog, Roes’ takeaway from the weekend is that while he’s not quite ready to race competitively again just yet, he considers Moab’s Red Hot “one of the best events I’ve ever been a part of.”

Part of the appeal of the race is its fun, laid-back atmosphere. At the post-race party in Moab on Saturday evening, runners enjoyed beer, food and a presentation by Jenn Shelton, 30, of Durango, Colorado, on her three years of attempting to set the Fastest Known Time (FKT) on the John Muir Trail.

The following morning, Moab’s Red Hot branded trucker hats and tees (included in every runner’s goodie bag) were seen all over Arches National Park, decking out runners keen on soaking up a little more of Moab’s desert sunshine before heading home. 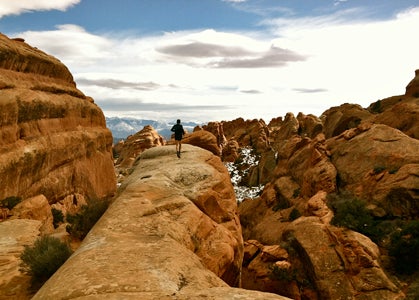 A shake-out run in nearby Arches National Park. Photo by Yitka Winn.

The next La Sportiva Mountain Cup race is the Hillbilly Half Marathon on March 8, 2014.