Racers encounter beer and vomit—not necessarily in that order 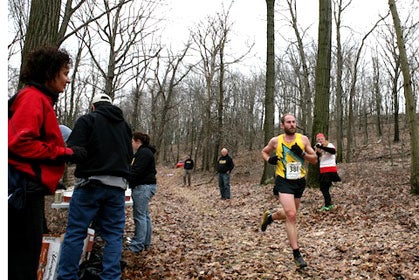 
In the second race of this year’s La Sportiva Mountain Cup, over 450 runners showed up to compete in the Chilly Cheeks 7-Miler in Reading, Pennsylvania. A race renowned for both its challenging terrain and its passion for beer (offered to runners at aid stations and at a post-race party), the Chilly Cheeks made for a romping good time on Sunday.

While snowstorms pummeled much of the East Coast last week, Reading escaped with just a few days of cold, damp weather, which left the Chilly Cheeks course muddy and full of deadfalls.

Race director Ron Horn, known for incorporating surprise obstacles, challenged runners less than a mile into the race with a bushwhack up a steep embankment. Later, Horn was overheard asking a finisher if he had had fun; before the runner could answer, Horn joked, “You weren’t supposed to.”

After several miles of running in a tightly packed lead group, Jordan McDougal, 25, of Warrenton, Virginia, and Ryan Woods, 33, of Boone, North Carolina, pulled ahead. They battled until the final aid station where McDougal opened up a gap on Woods. Shortly after, Woods missed a turn, allowing McDougal to cruise into a first-place finish in 47:37. Three minutes later, Matt Byrne, 37, of Scranton, Pennsylvania, and Jason Bryant, 40, of Elkin, North Carolina, flew across the finish line for second and third, with Woods right on their heels for fourth.

In the women’s race, after pulling ahead on the first steep embankment, Megan Kimmel, 32, of Silverton, Colorado, ran strong the entire race. She took first (16th overall) with a nearly four-minute gap over second-place finisher Kristin Zielinski, 32, of Philadelphia, Pennsylvania. Less than a minute later, Cynthia Bartus, 34, of Bethlehem, Pennsylvania, coasted in for third place.

At the finish line, McDougal mentioned to Horn that the steepness of the second hill had caused him to lose his breakfast. With his signature cheeky humor, Horn replied, “You puked? All right!”

For complete race results from the Chilly Cheeks, visit http://www.pretzelcitysports.com/userfiles/file/13%20CC%20RES.pdf.