Some race directors get creative with these innovative race formats 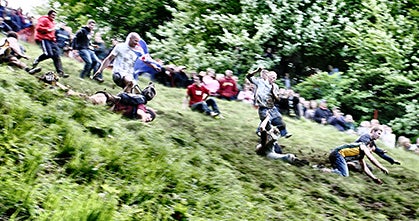 Most races, from your hometown 5K to the high-altitude Hardrock 100, share a basic concept: individuals competing to see who can cover a predetermined distance fastest. Not all trail races follow this format, however. If you’re looking for a new challenge, consider one of these unusual race formats.

For a few elite runners, their fellow homo sapiens just aren’t challenge enough. If you’re lucky enough to be one of them, try racing another species at the Man versus Horse Marathon in Llanwrtyd Wells, Wales. Since 1980, human and equine competitors have faced off over 22 rough miles of Welsh countryside. Incredibly, the humans have won twice (Huw Lobb in 2004 and Florien Holtinger in 2007). 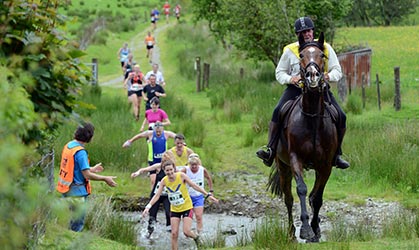 A horse leaves human competitors in the dust (or mud) at the annual Man v. Horse Marathon. Photo by Sam Bagnall/Whole Earth Foods.

Elsewhere in the UK, you can race a wheel of Double-Gloucester cheese downhill at the Cooper’s Hill Cheese-Rolling and Wake. The cheese, aided by gravity and a round shape, always wins.

Humans did score a notable victory against nature earlier in this summer. At dawn on June 21, the longest day of the year, two teams of endurance athletes set out to run the 152 kilometers around Europe’s Mont Blanc. Their opponent: the sun. The first team beat the sun by 37 minutes, while the other finished just 33 seconds after sunset. (See “By the Numbers” in our October 2014 issue for more on the challenge.) 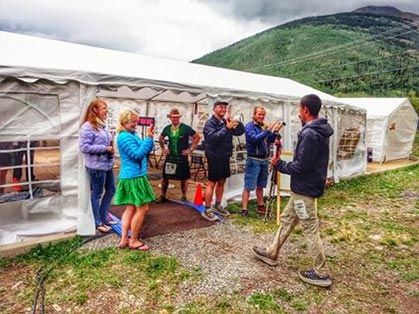 Whether you’re looking to try out an ultra distance, set a distance PR or simply run all day, a fixed-time trail event could be for you. The limiting factor in these races is duration, not distance: runners compete to run as far as possible in a fixed amount of time.

Most of these events are run on a 1-5 mile loop and last between three and 12 hours. Some races, though, push the concept to extremes, challenging runners to hold out for 24 hours or longer.

The Solemates Silverton Challenge, which kicked off this year on August 26 and ended on September 1, offers one-, two-, three- and six-day runs. Participants circle a one-mile loop of trail with 250 feet of elevation gain in Silverton, Colorado’s Kendall Mountain Recreation Area. The multi-day runs are continuous, not stage races; participants run and take breaks as they please.

The fixed-time format “provided a venue for those who might not be more fit for events that have certain distances and strict cutoffs informed,” says race director Mark Hellenthal. “This is a no-pressure, go-as-you-please setting that allows individuals to go beyond any constraints.”

In addition to standard aid-station fair, the race served three hot meals a day and soup through the night, and provided a large heated tent for cold, weary runners. “Nearly constant access to food, drink, restrooms, and my own supplies made for a comfortable run,” says Jeremy Bradford, who won the event’s 100-mile award after running for 32.5 hours. “Having my needs so closely monitored and provided for allowed me to clear my mind and just run without worrying about a thing.”

The Silverton Challenge also offers an as-yet-uncompleted 1,000-mile challenge, in which runners must complete at least one mile during each consecutive hour of the race to stay in. This year, three strong contenders entered, says Hellenthal, “But the mountain and Mother Nature had other ideas.” 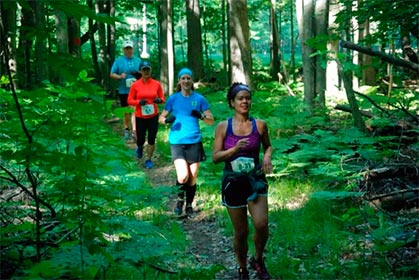 Runners team up at the Mid-Michigan Ultra Team Trail, aka the MUTT. Photo by Hanna Fowler.

Race with a Friend

Running ultra distances through the backcountry can be a lonely endeavor. If you’d rather have camaraderie than solitude, consider one of the many team trail events out there.

Most team events use a relay format. Some races, however, allow team members to accompany one another on the trail.

The Mid-Michigan Ultra Team Trail – or “MUTT” – race in Harrison, Michigan can perhaps lay claim to the most innovative team format. Teams of four runners start together, but each ultimately runs a different distance. 2.5 miles into the wooded course, one runner heads back to the start to complete his five-mile distance; the other three continue on together until their respective turnarounds, eventually completing 10-, 20-, and 31-mile distances.

“The MUTT was really inspired by my desire to continue to trail run with my friends who seemed to be increasing their race distances each year,” says race director Kevin Fowler. “I’ve raced 50K but never longer, and [their] 50s were turning into 100s. The team format with varying distances allows me to continue to race with them.”

The inaugural MUTT, held in June, was restricted to 10 teams, and Fowler says he received lots of positive feedback. “The fact that the teams have to stay together for the first half of each individual race distance requires a bit of strategy in terms of running pace,” he says.

Runners also stick together over the six days of the TransRockies Run, a 120-mile stage race in the Colorado Rockies held each August.

Aaron McConnell, president of TransRockies Events, says that the race attracts participants who want to run with a friend or family member, noting that while the race can also be run solo, “team registration remains the most popular way to do the TransRockies Run.”

If you prefer the company of your own mutt, some races allow runners to bring dogs on the course. The Dirty Dog 15K, held each May in Charleston, West Virginia, allows up to two dogs per runner, and even recognizes the fastest canine with the “Top Dog” award. (For more events that welcome canines, check out Trail Runner‘s list of dog-friendly races.)

Ragnar offers trail relays for teams of four or eight runners at several locations across the U.S.  The relays, held in such scenic locations as Snowmass, Colorad, the West Virginian Appalachians, and the Texas Hill Country, consist of three loops for a total of 120 miles, and last overnight. Runners camp out at “Ragnar Village.”
http://www.ragnartrail.com

>Dragon’s Back
Feeling bold? The Dragon’s Back Race is a five-day team or solo race through 300 kilometers of Welsh mountains. Be forewarned: much of the running is through “wild, remote and totally trackless ground.” The race has only been held twice – in 1992 and 2012. The third race will kick off in June, 2015.
http://www.dragonsbackrace.com