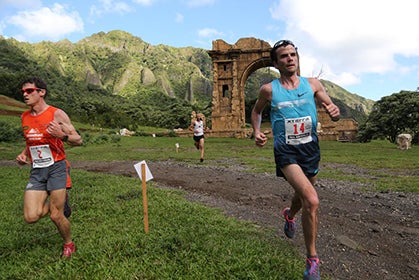 A half marathon course on trails and dirt roads, the XTERRA World Championship is part of a growing trail “championship” scene. A few weeks back, Moab, Utah, hosted the the USA Trail Marathon Championships, where Dakota Jones and Megan Kimmel won the men’s and women’s races, respectively. The North Face Endurance Challenge Championships in San Francisco, California, are scheduled for the same weekend as XTERRA.

While they don’t call themselves “championships,” established 100-milers like the Leadville Trail 100 and the Western States 100 Mile Endurance Run have achieved de facto championship status in the ultrarunning world. Add premier international events like the Skyrunner World Series, the World Mountain Running Championships and the Ultra-Trail du Mont-Blanc into the mix, and the mountain/trail/ultra championship starts to look downright crowded.

Though the only qualifying standard for the XTERRA Worlds is a plane ticket to Honolulu, the 13.1-mile championship race regularly draws a competitive field from road and track as well as trail. All-around distance pro Max King has won four times, and last year’s champ, Patrick Smyth, won in 1:16:38—all the more impressive on a muddy, rooty course with some 1700 feet of elevation gain.

XTERRA’s prize purse is modest by championship standards—$10,000 overall, with $2,000 each to the men’s and women’s victors—but part of its appeal is location: the championship half marathon, along with the accompanying 10K, 5K, kid’s race and “adventure walk,” takes place amidst the lush greenery and coastal views of Kualoa Ranch, which Pearl Harbor, LOST and a number of other productions have used as a backdrop. Plus it’s warm in December.

Related: Getting Lei’d on Oahu – an in-depth look at last year’s XTERRA Worlds, from our March 2014 print issue.