As trail runners, we are always in search of a new path or a higher peak … 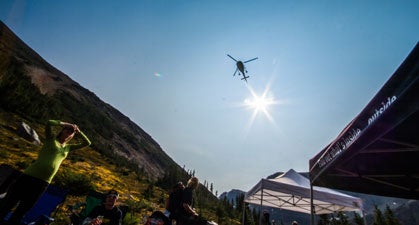 The helicopter departs from the race start.
Photos courtesy of TransRockies

As trail runners, we are always in search of a new path or a higher peak, a new sweeping panorama congratulating us on those 2000 feet of elevation gain we just charged (or struggled) up. As if in response to our unquenchable desire for adventure, this year, TransRockies Trail Striders Running Vacations introduced the HeliRun through the Canadian Rockies. As if trail-running vacations in Maui and Flagstaff weren’t enough to keep us occupied, this TransRockies event takes place in the pristine wilderness of Alberta, Canada, on singletrack trails that bring runners to a remote alpine lake. The event features a two-person relay format—one runner covers the first leg, a 12-mile ascent, and flies out, while the other is flown in and runs out.

The lake serves as the transition area from leg 1 to leg 2 of the run. Runner 1 takes on the 3100 feet of elevation gain, approaching the Lake of Falls, and then relaxes on the six-minute helicopter ride through the dramatic cliffs and valleys of the Cline River area. Runner 2 flies from the heliport in to the transition area set up at Lake of Falls (elevation 6900 feet). Leg 2 runners don’t start immediately following Leg 1 runners in order to allow the course to clear and to give the Leg 2 runners time to fly in and prep for the start. Once runner 2 has made the transition, he or she then heads back down the trail, to a finishing elevation of 4330 feet at the Cline River Heliport. Aid Stations at 5 miles (inbound) and 6.5 (outbound) split up each 12-mile leg of the run. 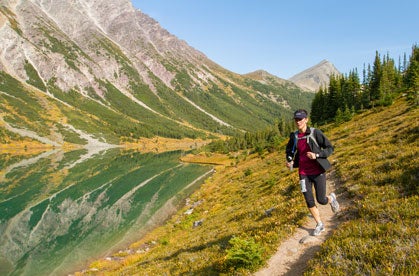 A runner has time to reflect on the picturesque singletrack trail.

“The views here are what inspired the event,” says Jonathan McLeod of TransRockies Inc., “along with a longstanding partnership with Kananaskis Mountain Helicopters and Icefield Helitours. The trail run is spectacular, but in combination with the helicopter flight it makes for an amazing experience.” Encountering the majestic rise of 12,000-foot peaks outlined in crystal-clear mountain lakes both on foot and from the sky is a rare opportunity. Thanks to the race location and the help of a helicopter, the race can access remote trails. The heliport is near Lake Louise and Banff National Parks, as well as the Columbia Icefield, Cline and Wilson Glaciers. It is about four hours in any direction to the nearest city (Calgary or Edmonton). Eventual winners Ty and Deb Davies of Idaho Springs, Colorado, flew into Spokane, and still had an eight-hour drive through three continuous Canadian National Parks to reach the start. 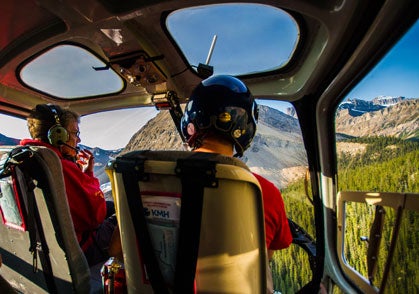 The helicopter flight is an adventure in itself.

The Davies raced in the innaugural event, and while they have also participated in multi-day TransRockies trail races in Colorado (Deb a three-time veteran of the six-day race and a one-time finisher of the three-day version, Ty a one-time finisher of the six-day run), they had never done anything “with a helicopter ride involved!” They heard about the race from the event organizers, who utilized social media to alert past TransRockies racers about the new opportunity. “We signed up because we knew [TransRockies] would put on an organized, well-staffed and adventurous event.” Taking their 9- and 11-year-olds along, they made a family vacation out of it. Ty Davies raved about the location, “even having grown up in the Rockies, we’d never seen the Canadian side; what a difference! … I [especially loved] being in the mountains but running at a much lower elevation than I am used to.” They felt the event was well worth the cost ($499 per two-person team). Though they couldn’t race alongside one another, the Davies felt the isolated nature of the event only added to it’s allure. “We felt like we were in the middle of nowhere—since we were—which is what we like. We could’ve run into a bear at any moment!”

In this, the first ever staging of the Helirun, there were 22 two-person teams (six male teams, eight female teams and eight co-ed teams). The Davies took first overall, with a time of 4:38:20. The top male team finished in 4:44:36, and the top female team crossed the finish in 5:42:01. There were two solo participants in the race, both women. Erin Kolla, who ran leg one of the race, had the third fastest time overall for the section: 2:36:42. 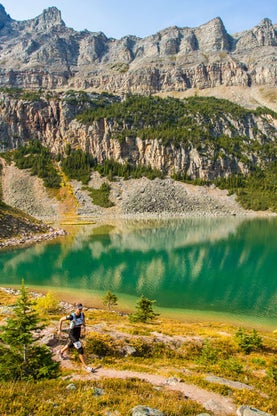 The wild beauty of Alberta’s high-altitude trails is unparalleled.