King defends his titles in both the U.S. 50K Trail and XTERRA National Championships in the same weekend; Baron and Anderson take women’s titles 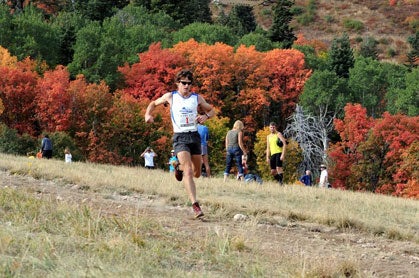 After Max King won the Flagline 50K in his hometown of Bend, Oregon, Saturday (also the U.S. 50K Trail Championship), he chose an odd way to celebrate.

King, 32, hopped on a plane to Utah, where on Sunday he won his fifth consecutive XTERRA Trail Run National Championship (a half-marathon) at Snowbasin Resort in Ogden.

It was the second consecutive year King pulled off the “Double National Championship Weekend.”

“I was tired but the second race went well,” says King. “I felt good once I got moving and had enough in my legs to stay in front [Sunday]. It worked well to run the completely different distances back to back.”

King says running his hometown trails gave him an advantage Saturday, a notion enforced by the fact that Bend runners swept the top three spots in the men’s race. King finished in 3:33:10, followed by Mario Mendoza in 3:44:14 and Ryan Bak in 3:44:58.

“I ran with Mario and Ryan for about 10 miles. Ryan stayed with me until about 20,” says King. “For Mario this is a pretty long distance and Ryan is coming back from injury, so I didn’t expect them to be there at the end.”

“The course begins with about eight miles of mostly downhill, so I thought that the start would be fast,” says Baron, who placed second in the Mesquite Canyon 50K and Jemez 50K earlier this year. “I was looking forward to the first climb starting shortly after the initial drop, because I don’t think the downhill plays to my strengths right now.”

“Once the first climb up the Flagline trail began, I felt more in my element,” she continues. “I passed [Bak] about a mile into the climb. I led the rest of the way, and actually didn’t realize what a close race it was until after I finished.”

Full results of the Flagline 50K (when available) can be found here.

On Sunday, in Ogden, another hometown runner earned a national title. Lindsey Anderson, a 2008 Olympian in the steeplechase, won both her first XTERRA title and her first-ever trail race. She covered the 21-kilometer course in 1:33:23, just over one minute ahead of Salt Lake City’s Kerri Lyons, who finished second in 1:34:27. Amber Moran of Asheville, North Carolina, finished third in 1:38:53.

“I’ve trained on trails before, but this was my first race,” says Anderson. “My coach told me to try this race and it was great.”

In the men’s race, King took the lead midway through the course, which he covered in 1:22:12 to defend his title. He finished just over a minute and a half ahead of runner-up J. Marshall Thomson of Crested Butte, Colorado, who crossed the line in 1:23:48. Salt Lake City’s BJ Christianson finished third in 1:24:29.

King says he did not specifically alter his training to handle the back-to-back efforts.

“The general flow of training tends to simulate days like this,” he says. “A long day on the weekend followed by a fast short workout on Monday, for example.”

Complete results of the XTERRA Trail Run National Championship can be found here.