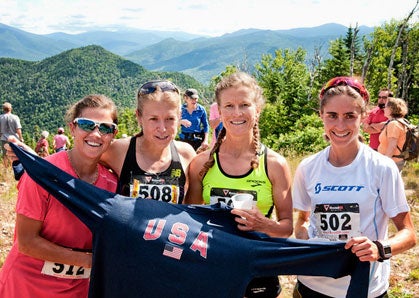 At the men’s qualifier at New Hampshire’s Mount Washington, it was Sage Canaday who made a splash and Max King who missed out; at New Hampshire’s Loon Mountain Race, Morgan Arritola took the title and defending champ Kasie Enman came agonizingly close, but will not return to the World Mountain Running Championship that will take place in Italy this September.

When Arritola of Ketchum, Idaho, gapped the field by nearly a minute at Loon Mountain on Sunday, U.S. Mountain Running Team (USMRT) Leader Richard Bolt says he was not surprised.

“I’ve seen her race at the National Trail Championships in Bend, Oregon,” he says. “And this was a race that really played to her strengths as a Nordic skier, as a power-endurance athlete.”

Arritola was a 2010 Olympian and three-time junior national champion in Nordic skiing, and has recently made the switch to trail running (see our Q&A with Arritola here). At Loon, she earned a U.S. Mountain Running title in her first attempt, winning the five-mile race in 46:16, and she will lead the women’s USMRT to the World Championship in Italy this September.

Also making her first team was Melody Fairchild of Denver, who finished second in 47:06, and Stevie Kremer of Crested Butte, Colorado, who finished fourth in 48:21. Brandy Erholtz, of Evergreen, Colorado, is the only USMRT veteran who qualified, finishing third in 48:06.

“It’s always great to have new people,” says Bolt. “We’re attracting people who run on the roads and the track at a high level, which is great for the team and the sport. It keeps the veterans pushing harder.”

“Typically, I’m a front runner and don’t like to run in a pack,” Erholtz says. “However in this race, I knew patience would be a virtue … I knew if I was in contention when the climbing started, I would have a solid chance at making the team.”

Erholtz, who says the race went out fast early on (the lead pack reportedly ran the first mile in about 5:10), was never in the top four until after mile three. She passed Fairchild on the final climb to make her fifth USMRT. “During the race I was never secure in my spot. I learned last year the race isn’t over until you cross the finish line.”

USMRT Junior Team Manager Paul Kirsch, who co-directed the Loon Mountain Race, says no outcome—even one that leaves the defending world champion off the team—is surprising given the depth of the talent Sunday. “The field was so strong that any one of 10 different women could have made the team,” he says.

The U.S. women have placed fourth each of the last two years at the World Championship and third in 2009. They placed first as a team in 2006 and 2007.

Complete results of the women’s U.S. Mountain Running Championship can be found here.

Overall results of the Loon Mountain Race can be found here.