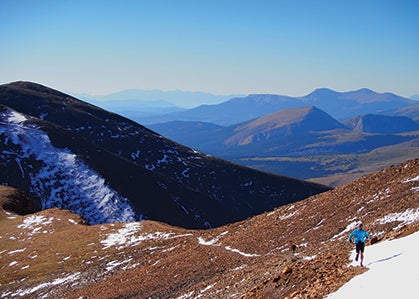 A runner approaches the final saddle, with Mount Bross just ahead. Photo by Deni Béchard. Check out a full gallery of photos below.

At the 12,000-foot trailhead, the air feels thin. The mountains rise sharply on three sides around Kite Lake, a small body of water shaped like its namesake, about two hours west of Denver. By 8 a.m., when the race starts, the sky is bright but the sunlight has yet to reach the runners. Though it’s mid-September, their breath mists, and the slopes are threaded with snow.

Of the 70 competitors in this unsupported, fee-free race, almost no one starts out running—it’s steep and high from start to finish. The Kite Lake Triple trail makes a 7.75-mile loop over four 14ers (mountains over 14,000 feet) with a combined ascent of more than 3,500 feet.

Ian Leirfallom, 34, created the race in 2012 because of his personal connection to the land. He grew up in Boulder, but his father bought property near Alma, the town closest to Kite Lake. Leirfallom spent summers outdoors—running, biking, cliff jumping. In the winters, his father drove him and his brother up Mount Democrat in a jeep (it was legal back then), and the boys skied down.

But after high school, while living in Boulder, then Durango, Leirfallom became involved in crime: marijuana cultivation, which was still a criminal activity in Colorado at that time, as well as breaking and entering. “By the time I was 22, I’d been in and out of jail too many times to count, and I was already a two-time convicted felon,” he says. “Those mountains were memories of a life once passed.”

Only with his brother’s support—the two of them taking trips skiing, hiking and mountain biking—did Leirfallom decide to change his life. In 2005, after graduating college with honors and teaching himself to make a living on the stock market, Leirfallom moved to Breckenridge, a short drive from his family’s cabin in Alma. He used the mountains around Kite Lake to clear his mind, ground himself and get healthier. He first hiked them, then began running them. His first recorded time on the 7.75-mile loop was 3:45.

Over the next year, he lowered it to 2:45, then 2:25. “I felt like a changed man,” he says, “alive again, like I could do something special and unique—and it wasn’t illegal.”

Late one afternoon, in July 2012, Leirfallom and a friend, Nic Nolan, were drinking Miller High Life and Jameson Whiskey at their favorite Breckenridge establishment, the Dredge Boat Restaurant and Bar. Leirfallom shared the idea of having a race among friends. Nolan bit and they started calling people while still at the bar. The first race consisted of 20 close friends. Teague Holmes won at 2:00, and Leirfallom came in second.

All photos of the 2013 Kite Lake Triple by Deni Béchard.

Triple Plus One
The first two miles of the race are a 2,000-foot climb to the top of Mount Democrat (14,148 feet). When runners come back down, they fly, quickly covering the almost 900-foot descent before ascending again, this time even higher, to Mount Cameron’s 14,238-foot summit.

From here on, the saddles between the peaks are less dramatic, and the strongest runners race across the expanses of broken stone. On either side, the landscape opens out: plummeting valleys and ever more distant mountains etched at the horizon. Mount Lincoln, the third peak, is the tallest, at 14,291 feet—243 feet above the highest point of Colorado’s famed Hardrock 100 Endurance Run.

Snow fell a few days before the 2013 race, and, as we ran, it blew vertically up the inclines. The wind often struck runners so hard that they staggered. At times, I stopped noticing the altitude and pushed harder, only to run out of breath a few minutes later.

Though the race is called the Kite Lake Triple, there are actually four summits. The top of Mount Bross, the final summit, is privately owned and off limits—a contentious issue for locals who understand the dangers of tourists exploring old mine shafts but believe the trail itself should be open to hiking as it once was.

The trail passes just beneath the summit, then plunges to possibly one of the most difficult sections: a switchback down a steep shale slope. Some runners kept their momentum, arms up as they slid and leapt, while others slowed, still sliding. From our height, Kite Lake and its nearby parking lot full of cars looked the size of a quarter on a sidewalk.

First place for men went to Gavin McKenzie, at 1:36, and, for women, Marlee Dixon at 1:52. The race ended with a party, beer, food, a campfire and conversation on the lakeshore.

“The race is already attracting stronger runners,” Leirfallom told me when we crossed paths in Cuppa Joe, in downtown Breckenridge, “so we have to find a way to keep them challenged.”

Deni Béchard is the author of Cures for Hunger, a memoir about growing up with his father who was a bank robber, and Empty Hands, Open Arms, an account of his travels in the Congo rain forest.